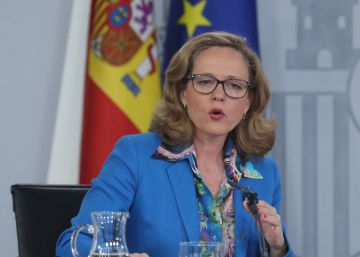 Nadia Calviño retires from the race for being a European candidate to preside over the IMF. After the first round of voting, which has ended without consensus and, therefore, will be repeated, the Spanish candidate has announced that she will not continue in the process, to try to facilitate a common and consensus name. Last night he retired, with a very similar message, the Portuguese Mário Centeno, the president of the Eurogroup. The South stays like this without any candidate. Three Europeans are still on the list to be elected, waiting for a new vote. The election must be by qualified majority. The names still in the race are the former Dutch minister and former head of the Eurogroup, Jeroen Dijsselbloem; the governor of the Bank of Finland and former European commissioner Olli Rehn and the current CEO of the World Bank, Kristalina Georgieva.

"Spain will always be willing to promote consensus among the countries of the European Union to elect a common candidacy for the management of the International Monetary Fund. To that end, we announce that the government is committed to achieving a European agreement, without the Minister of Economy Nadia Calviño participates in the next phase: Pedro Sánchez's government will continue working to promote the governance of international organizations and considers it an honor that any of its members can be considered, now and in the future, as a guarantee at the highest level for its operation, "according to Moncloa sources.

Nadia Calviño's career for the IMF has been short but intense. The vacancy for the position of Managing Director of the Fund, one of the most powerful organizations in the world, met on July 3, when the current occupant, the French Christine Lagarde was the name of consensus to fill the vacancy that remained in the European Central Bank. That change by surprise, precipitated the search for a spare in the IMF, an agency where a European has always been leading, while the Americans have always occupied the World Bank.

Europe, however, does not have 100% secured the IMF command chair, as India, China and Latin America once again raise their voices to question whether it is not the time for the emerging to opt for that position. So the European Union decided to join forces and agree on a single consensus name, to present as a block, and thus try to shield the tradition.

The first days of Nadia Calviño's name did not sound loud. Others were imposed such as Jeroen Dijsselbloem and even Mark Carney, the current governor of the Bank of England, with a Canadian, British and Irish passport. However, Calviño's name began to gain strength, especially for its outstanding preparation and its ability to mediate and reach consensus, a profile that has been won among his colleagues within the eurogroup. Finally, on July 17 at night, the Government indicated that it was grateful that the acting Minister of Economy was in the pools for holding the position. A few days later, his candidacy was already officially processed, and he became a member on July 26 of the official list of candidates presented by France, the country that has served as a mediator in this search for a common name.