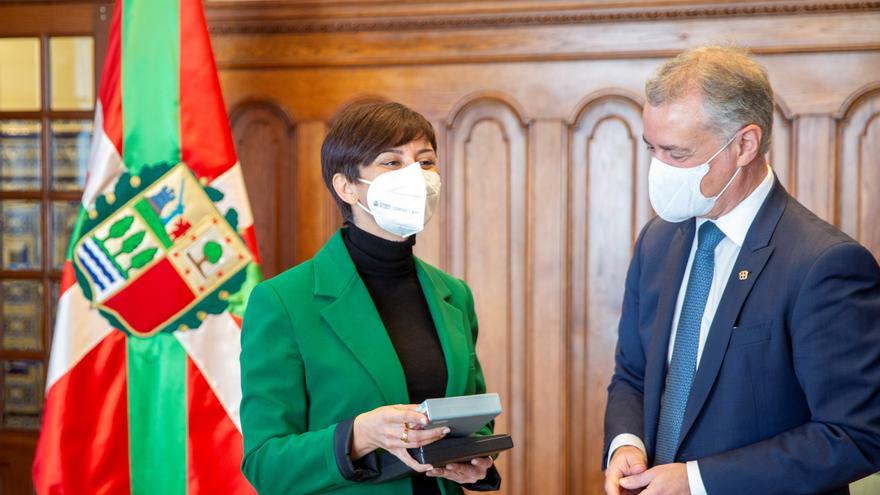 The labor reform threatens to become a heart attack negotiation. Despite the fact that the talks are taking place on various sides, the Government does not yet have sufficient support to carry it forward and the option that, given the rejection of the usual partners of the coalition, leads to the Ciudadanos route raises rashes in United We Can. In the midst of the exchange of messages and calls and after the trip to Catalonia by the Vice President and Minister of Labour, Yolanda Díaz, to intensify pressure on CKD, the Executive has winked at the PNV by committing to the Basque Government to transfer the full and indefinite management of the minimum vital income. Relations between the Basque nationalists and Moncloa are not going through their best moment and sources jeltzales They assure that the gesture for this transfer does not eliminate their demand to recover the prevalence of the autonomous agreements over the state ones to agree to support the text that came out of the social dialogue.

With less than a week left for Congress to vote on the labor reform decree law, the Minister for Territorial Policy, Isabel Rodríguez, traveled to Vitoria to, among other things, meet with the Lehendakari, Iñigo Urkullu. The main issue on the table was the transfer of the minimum vital income twenty months after its approval and three agreements reached by Basque socialists and nationalists in the framework of different negotiations that did not end up coming to fruition. The rope was tightened even more a couple of weeks ago by the Minister of Social Security and Inclusion, José Luis Escrivá, who proposed the "temporary" assignment of the transfer. The The Basque government and the PNV then increased the pressure on Pedro Sánchez.

It is not the first time that Basque nationalists have complained about Escrivá and even the parliamentary spokesman, Aitor Esteban, came to regard relations with the head of Social Security as broken. "I have a total break with Minister Escrivá for the minimum vital income. That he does not ask me for even water," he said in a interview in elDiario.es. It has been the Minister of Territorial Policy who has been in charge of closing the details by giving up the "full and indefinite" transfer just three days after Escrivá assured that she was in the "technical discussions" phase. "What we have brought is the 'ok' to the last allegation that they had registered," government sources explained this Friday. Hours before, Urkullu had made it clear that the attitude of the Government of Pedro Sánchez was "manifestly improvable" in relation to the bilateral relationship.

Aware, in any case, that the new proposal meets the demands of the Basque Government, the rapprochement caused a certain euphoria in the central government given the closeness of the vote on the labor reform - to which the PNV maintains its rejection-. "In the framework in which we are a week away from the labor reform, it is a little push," government sources assured: "Everything helps." However, the Basque Executive assures that it will have to analyze this proposal and distrusts it to a certain extent given that there have already been three previous agreements: one during the negotiation of the state of alarm, another in the processing of the law and the last with the approval of the General State Budgets.

In addition, the Government runs into, at least at this time, the bicephaly of the Basque nationalists, who differentiate between the day-to-day management of the Executive – which includes the transfer of the IMV – and the position of the party. "They are two different issues that have no connection and the resolution of one will not interfere with the other," they warned before the agreement finalized this Friday. "There is no change. We have not said that the transfer entails supporting the labor reform. The condition for supporting the labor reform is known: the prevalence of regional agreements over state agreements to protect the Basque framework of labor relations, taking into account the interprofessional agreement reached in 2017 between Basque social agents", they explain from the Basque group after the meeting between Rodríguez and Urkullu.

The PNV is not the only usual partner of the coalition that for now has dropped from the labor reform. It's more, of the 188 supports that Sánchez managed to garner for the two consecutive budgets, the vast majority ask to go beyond the agreement reached with unions and employers. ERC and EH Bildu (which add 18 seats to the PNV's six) joined forces with the CUP and BNG –although these parties do not support the relevant government projects– to demand changes in the labor reformincluding more ambition when it comes to layoffs.

A few days before the vote takes place, in the Moncloa calculator they give the numbers with the Yes of Citizens – willing to support the Government as long as nothing of the agreement is touched, as employers and unions claim – and a handful of minority groups. However, it is an option that Yolanda Díaz does not see. "Does not give. It would not come out in any way because the entry of Ciudadanos expels leftist formations, "she said in an interview on Cadena SER.

Most of the allies of the investiture do not see this approach with good eyes. "It is bread for today and hunger for tomorrow," warned the deputy for Compromís, Joan Baldoví. "Carrying out the labor reform (...) with the support of the most conspicuous and antisocial right, such as Ciudadanos or the support of UPN, I don't know if it doesn't leave the credibility of the reform a little touched," he said on Onda Cero. PNV leader, Andoni Ortuzar, who also warned that "it may endanger or strain relations with the parties that normally support his government action." However, in the socialist ranks they maintain that the forces of the investiture and the budgets are a priority, but they keep that ace up their sleeve because they cannot "exclude anyone".