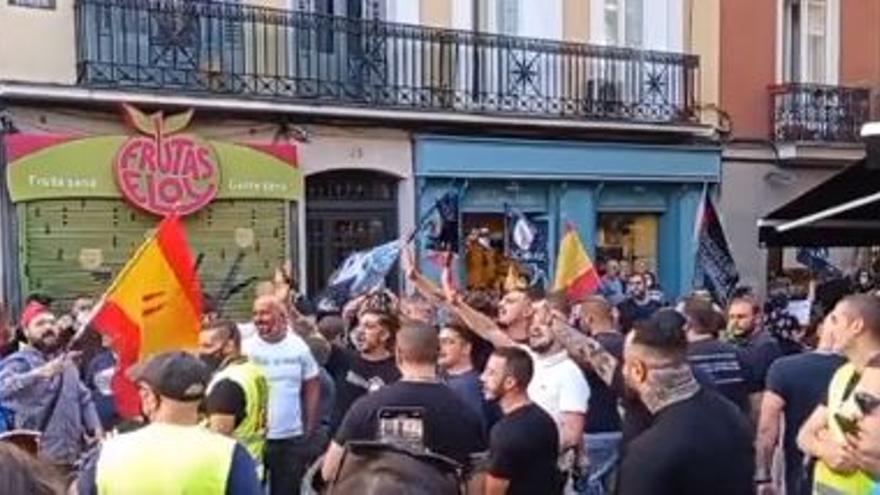 The Minister of Equality, Irene Montero, has assured that the Government will inform the Prosecutor’s Office of the neo-Nazi demonstration that took place this Saturday afternoon in the Madrid neighborhood of Chueca shouting “out of our neighborhoods” and “out of Madrid”.

“We will inform the Prosecutor’s Office of the lgtbiphobic and racist hatred of today’s Nazi demonstration in Chueca. We are also urgently processing the Trans and LGTBI Rights Law, which is what allows us to protect rights. LGTBI groups and people, you are not alone” Montero wrote on Twitter shortly after images of the protest began to be published.

This Saturday afternoon, numerous users on social networks have shared images of the march, called by the far-right group Madrid Seguro, against the “2030/2050 Agendas”, according to a poster that has been shared on networks.

The protesters, escorted by the National Police, have made the tour of the well-known Madrid neighborhood and center of the LGTBI Pride festivities in the capital, holding banners and flags of Spain with the slogan “say no to the 2030/2050 agendas.”

Montero’s rejection was also joined by the Minister of Social Rights and the 2030 Agenda, Ione Belarra, who stressed that “they will face” all the people who defend a free country. “There are many more of us who defend a country in which all people have the right to be who they are freely, in the Government, in all institutions and also in the streets. They will have us in front of them,” he wrote.

But they have not been the only ones to regret the images. The leader of Más País Íñigo Errejón has been quick to condemn the events, which he has labeled “intolerable” and has indicated that the Government Delegation in Madrid “must give explanations.” That is why he has reported that he will ask about the demonstration in the Congress of Deputies.

Ciudadanos has also condemned the images on its Twitter account. “Regrettable episode of accusation against the LGTBI collective in the Chueca neighborhood. All our rejection of this hateful parade. Democrats must close ranks with the defense of freedom: Madrid and all of Spain will continue to be everyone’s home,” said the Inés Arrimadas party.