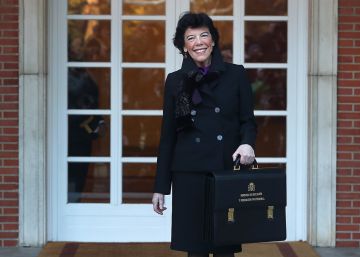 The Minister of Education, Isabel Celaá, announced on Thursday that his ministry will appeal by court the call parental pin imposed by the Government of Murcia to the educational centers of that region. The parental pin, one of the star proposals of Vox in the last elections, it forces to the schools to inform the families of all the complementary activities organized within the school schedule, and establishes the right of the parents to give their consent or not to each one of those workshops. "The claim that families know in advance and authorize their children is a covert conscientious objection that could be applied to curricular content and that goes against Spanish legislation, "Celaá said. The debate on parental pin It resurfaced last Tuesday after Vox included in its list of requirements to support the budgets of the region of Murcia - PP and Citizens need the vote of a deputy of Vox to reach the absolute majority - to be included in the educational regulations (until now it has only been an instruction of the Ministry to the centers).

Vox's idea about the parental pin arose, according to members of the educational community, following the discontent of some groups such as the Family Forum - an ultraconservative civil organization - with the participation of LGBTI associations external to educational centers in activities on affective-sexual diversity. "These workshops are organized in communities such as Madrid for years and is the way to give voice to people of different sexual orientation, so that diversity is not studied only on paper," explains Belén de la Rosa, secretary of equality of CC OO, union that last October appealed against the Murcia council and is awaiting a resolution.

Celaá has warned that the ministry will appeal "Any initiative aimed at undermining the right to education and censoring the performance of schools and their teachers" and has clarified that the parental pin It is contrary to Article 1 of the current education law (Lomce) on "the integral formation of the student", to the own autonomous norms and to the Law Against the Violence of Gender.

From the normative point of view, the parental pin It would be, in theory, unfeasible. Autonomous regulations establish that complementary activities in schools and institutes - which, unlike extracurricular ones, are carried out during school hours - are mandatory for all students and evaluable, so parents cannot refuse to have their children Receive this type of training. On the other hand, all complementary workshops are included in the annual programming of the centers, which means that they are public and accessible to family members. "These workshops, which can be of different themes, are approved by the faculty, presented at the school board - with representation of the families - and, finally, supervised by the educational inspection," says Raimundo Benzal, recently retired Education inspector.

We will appeal to justice the decision of the Region of Murcia to impose a ‘parental pin’. This measure violates the right of students to receive a comprehensive education in respect for fundamental freedoms and exceeds the competences of schools. pic.twitter.com/7EIR7i2l4B

This "veto", the ministry said in a statement, "collides with the fundamental constitutional right to education, in addition to contravening various international treaties ratified by Spain such as the Convention on the Rights of the Child, the Universal Declaration of Human Rights, as well as the Memorandum of the European Commission against Racism and Intolerance, educational regulations, and specific regulations on the subject LGTBI".

"The educational regulations prescribe that it is the teachers, within the framework of the pedagogical autonomy of the educational centers, who have the competence to design the complementary activities they deem appropriate and thus comply with the provisions of the curricula," they add.

The note states that the constitutional Court He has indicated in several sentences that "the right to conscientious objection only exists in our system in cases expressly contemplated by the Constitution and laws."

Murcia —With a Government of PP and Citizens, with the support of Vox- last September became the first autonomy to launch the parental pin. LThe Murcia Ministry of Education, in the hands of the PP, included among the instructions that it sent to the educational centers the need for families to give their express consent for their children to participate in complementary activities, those that do not have to be linked to content Curriculum, but taught within the school schedule. From the counseling, they indicated with the measure "It responds to a growing demand from parents", which is applied "in all subjects" and "only if they are taught by staff outside the school." In addition, they pointed out that “within the autonomy of the schools”, each one will determine the parental consent model to be completed.