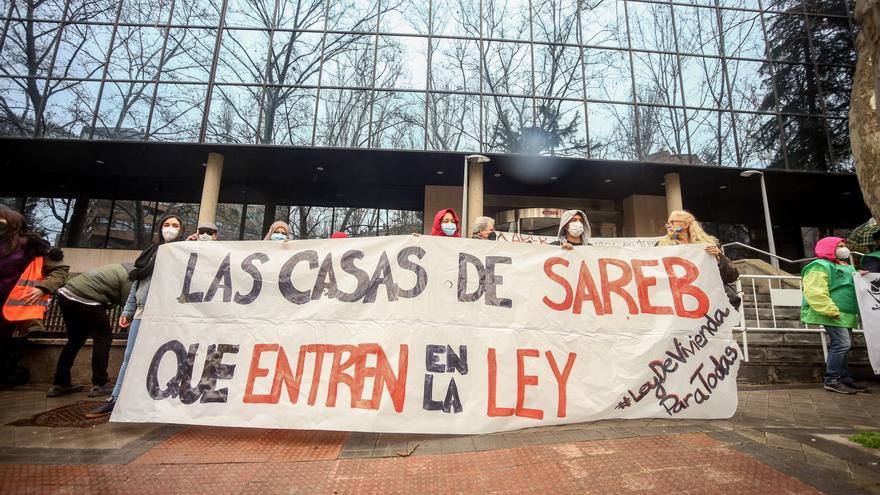 The Official State Gazette (BOE) has published this Wednesday the Royal Decree Law that allows the State to assume a controlling position in Sareb, popularly known as a bad bank. The rule, which comes into force this Thursday, includes more details about the change in status of this company that absorbed the toxic brick of the rescued bank in 2012 and that has caused, almost a decade later, that the State has had to increase its public debt by 35,000 million euros. The main issue contained in the regulation approved this week by the Council of Ministers is that, as was the case with Bankia, Sareb will continue to be private and will not form part of the State's assets, even though the State controls the shareholding.

What the new rule does is correct the 2012 rule created by Sareb to allow the State, through the bank rescue fund (FROB), to exceed 50% of the shares, something that was not possible to date. The Government takes this decision after it was verified in March last year, after the obligation by Eurostat, that the debt that remains pending in the bad bank —35,000 million of the initial 50,000 million— is public, since it was backed by for the Treasury. It also affects the fiasco of this tool called to clean the balance sheets of the banks affected by the State deficit.

The FROB, also a 16% shareholder of CaixaBank after the absorption of Bankia, has 45.9% of Sareb's shares, while the rest is in the hands of the private sector, both banks (except BBVA) and insurance companies. With the new norm, it will be possible to exceed 50%, in an operation that the Government defends that it will not entail new disbursements since it will be done with testimonial prices. Despite the fact that this means, de facto, that the State will control the company, it wants to avoid turning Sareb into a public company. "It is expected that the FROB may reach a majority position in Sareb's capital without the latter acquiring the status of a state-owned commercial company," states the preamble to the Royal Decree approved on Tuesday. "Society will remain subject to the private legal system," he stresses.

This situation is reminiscent of Bankia. Also in 2012, the FROB landed in the capital of the banking entity and took over most of the capital. This participation was reduced to around 62% of the bank, which never operated as a public entity. Its own managers, with José Ignacio Goirigolzarri —today president of CaixaBank— at the helm, avoided this possibility and functioned independently. The FROB, in fact, was not even part of the board of directors.

The justification given by the Government for Sareb to continue in the private sphere and not become a State trading company is based on the fact that it seeks to "guarantee that the potential takeover does not entail a change in its ability to act as a of resolution". The Executive considers that it is the best way to meet its objectives of gradually disinvesting the assets it has in its portfolio from the financial crisis.

The Royal Decree, however, does enable the State to control the salaries of Sareb's leadership. This issue has been controversial in the past within the company which, although it was not public, did have the FROB as its main shareholder. The matter came to Congress in parliamentary questions, although the Government, then of the PP, dispatched them justifying that the high salaries of society - an average of 105,000 euros - corresponded to the remunerations of the financial and real estate sector. This average between personnel costs and number of employees has moderated to 94,000 euros. In the last year with the published accounts, 2020, the then president of the company, Jaime Echegoyen, received 375,375 euros, although in some years his salary was close to 500,000 euros. Echegoyen was relieved in 2021 by Javier García del Río.

The Government, in this way, will assimilate the remuneration of the company's senior officials to that of other state companies, lower than what they have been receiving to date. "It is considered necessary and urgent to subject the company's remuneration policies to the principle of budgetary efficiency," states the Royal Decree. Although Sareb is given three months to adapt to its new corporate reality, the Executive makes this section a reality from the very day that the reform of the regulation comes into force, this Thursday.

At the moment there is no fixed term for the Government to begin executing the operation to assume control of the entity. The Government does not seek to acquire 100% of the shares, but the objective is to exceed 50% to control decision-making. It currently has 45.9%, so it needs just over 4% to overcome that barrier. Industry sources point out that, although there is no urgency to undertake these transfers, it is a matter of the coming weeks.

The Executive intends that this operation does not suppose a higher cost for the public coffers, hence the talk of the "testimonial" price of one euro. At the same time, the aforementioned sources in the sector trust that most of the losses they have suffered can be fiscally compensated, and thus cushion the impact of these operations. This would be, they point out, the matter to be negotiated between the Government and the shareholders. In addition to the FROB, they are shareholders of Sareb Banco Santander (22.3%), CaixaBank (12.24%), and Sabadell (6.6%). The rest of the shareholders are below 3%. Sources from the Ministry of Economic Affairs rule out that they are going to try to reach 100% in this takeover.

The change in status for Sareb goes beyond ownership or control of salaries. The Government explains in the Royal Decree that the bad bank is empowered to transfer housing to public entities or non-profit entities, "thus incorporating social utility within the objective of optimizing value." In this way, the aim is to "reinforce" a series of assignments that had occurred in the past within Sareb's Corporate Social Responsibility (CSR) policy, turning it into a line within the strategy. Social organizations such as the Platform for People Affected by Mortgages (PAH) or parties such as United We Can have demanded in the past that the homes owned by Sareb be transferred to the public housing stock and used for social rentals.

The decree also modifies some formal aspects of Sareb. For example, the monitoring commission of the entity disappears. This commission was made up of representatives of Economic Affairs, the Treasury, the CNMV or the Bank of Spain and controlled that the strategic objectives of the company were met. "The monitoring of the company's activity and verification of compliance with its objectives will be carried out directly through the company's control bodies" after the takeover by the FROB, the Royal Decree points out.

In addition, the decisions of the FROB on the management of shares, holdings, etc. They will be taken by its governing committee in a reduced composition —without the Bank of Spain and the CNMV—, with the aim of avoiding "the participation of supervisors in the strategic and corporate decisions of a supervised entity". These decisions will be made by a commission made up of the FROB president, Paula Conthe, three representatives of the Vice-presidency for Economic Affairs and two from the Ministry of Finance.

The Ibex seeks 8,500 points with another timid rise

Ignacio Marco-Gardoqui: He will know...