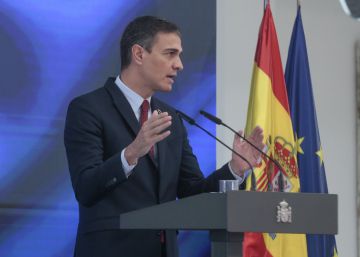 “We are still in the midst of a pandemic, but the world has changed and we must accelerate the transformation of the country if we want to earn our future,” said the President of the Government, Pedro Sánchez, adding that “it is not just about recovering the GDP that was taken from us. the pandemic is about growing in a new way ”, a“ stronger and fairer, more competitive, but also more sustainable ”. To this end, in a ceremony from La Moncloa with the telematic presence of the rest of his Cabinet, representatives of employers, unions and European ambassadors, Sánchez presented the Recovery, Transformation and Resilience Plan for the Spanish Economy, which he defined as “the roadmap for this new modernization of our country for the next six years.” A strategy with which the Executive aspires to capture European aid and channel it immediately into investment. The starting goal, he announced, is to mobilize 72,000 million euros between 2021 and 2023 to raise potential GDP growth by 2.5 points and create 800,000 jobs in those three years.

Although Spain aspires to obtain a total of 140,000 million euros in European funds in six years, Sánchez only mentioned half that will be in the form of subsidies because the Executive, knowledgeable sources reveal, will wait in mid-2023, the deadline that exists , to decide what it requests from the other 70,000 million in EU credits. Although Brussels advises to take advantage of the transfers first, exhausting the deadline to request the credits will allow the coalition government formed by PSOE and United We can practically serve the legislature without the blemish of having requested loans that the opposition could present as a rescue with conditions.

To start the plan, the Executive will anticipate the 27,400 million that it expects to receive already in 2021 via debt so that they are available from the entry into force of the new Budget that they aspire to promote for next year. Although the necessary support to carry them out is up in the air, the Government assures that not having some would greatly complicate the articulation of the new aid, which promises to become an argument to pressure the parties that do not support the new accounts. The objective is to fully implement investments worth those 72,000 million in three years (70% in two years) so that GDP, which will fall by 11.2% this year according to their calculations, not only rebound 7.2 % next year but grow by 9.8%.

Sánchez anticipated that 37% of the funds will go to “green investment, linked to the ecological transition”, and that another 33% will go to the country’s digital transformation, as required by the EU, “to create hundreds of thousands of jobs, thousands of companies ”, help small companies to become medium-sized companies, reindustrialize the country or advance in the fight against climate change and social inequality.

The start-up of these projects, he said, involves approving new General State Budgets, for which the Government has increased the spending ceiling by 53%, to 196,000 million euros, committed to the ecological transition, the transformation digital, equal opportunities and social cohesion.

The Plan unfolds around four pillars. An environmental one, which involves driving 250,000 electric vehicles by 2023, in order to reach five million in 2030; enable 100,000 charging points for them; rehabilitate more than half a million homes in three years or invest 2,000 million in restoring 3,000 kilometers of rivers. Another digital, which seeks to modernize education and companies, give digital training to 80% of Spaniards; that 75% have access to 5G coverage and that the entire population has fast internet. The third is equality, which seeks to end the gender gap and provide 65,000 places for infant education from 0 to 3 years old. And a quarter for equal opportunities that will create 200,000 new vocational training places in four years, will strengthen health, education, care for dependents, active employment policies and care for rural Spain. In parallel, the Government will promote a “fair tax system” in the coming years.

In turn, investments will be articulated around 10 structural policies in whose distribution (see breakdown) the educational leg will be the one that receives the most funds.

In any case, one of the main problems that the plan presents is the low degree of execution of European funds that Spain achieves, which in the last multi-year community budget was only 34%, according to the savings bank foundation, Funcas.

To eliminate all the “administrative obstacles” and “bottlenecks”, Sánchez announced that he will simplify the legislation governing public contracts and subsidies by decree, to guarantee an “impeccable” and “agile” execution. In parallel, it will deploy a monitoring and accountability mechanism. Sánchez will create an interministerial commission, chaired by him, and a unit for monitoring investments in Moncloa; it will reactivate the Sectoral Conference of European Funds with the Autonomous Communities; it will strengthen the Conference of Autonomous Presidents, involving local entities; promote the dialogue of the plan with employers or unions; and a recurring report will be given to Congress and the Senate.

“Never, at least since the times of the Transition, has our country needed so much unity, the cooperation of the parliamentary forces,” the Prime Minister ended up claiming, stating that this is “the greatest challenge our generation has faced since the reestablishment of democracy ”. “The plan that we present today, the General Budgets that activate it, offers a unique opportunity to demonstrate the momentum of our country, good policy, agreements and solutions,” he asserted, asking leaders and political forces for “unity”, without adherence blind but with criticisms that are constructive, he claimed.