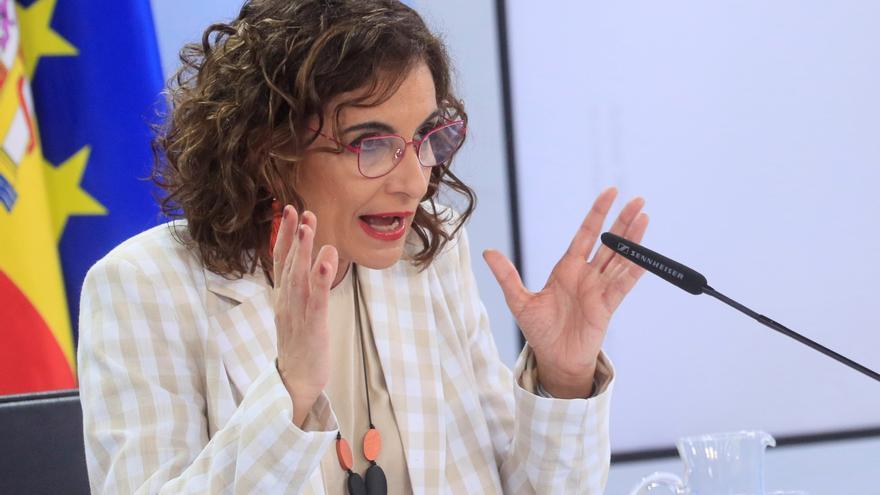 The Minister of Finance, María Jesús Montero, presented on Monday the three sections of the recovery plan sent to Brussels that depends on her Ministry. There are three sections: reducing fraud, adapting taxation “to the 21st century” and improving public spending. The main measure that flies over all the sections that his cabinet assumes is social reform, which now warns that it could be delayed beyond 2023 if the forecasts for the recovery of the economy after the pandemic are delayed beyond the forecasts that are managed: late 2022.

Montero has defended Brussels “knows and shares” the intention of the Government to link the application of the fiscal reform based on when it can recover the levels of GDP prior to the outbreak of the coronavirus pandemic. Initially, it is expected that next year the Treasury will receive the report that the committee of experts presented a month ago is preparing. However, it would not be until the year 2023 when the measures that may arise from it come into force. That date would be delayed if the expected economic recovery has not arrived by the end of next year.

Montero has once again emphasized this Monday on the need for Spain to undertake this reform of its tax system in order to be able to approach the European average of tax pressure which, as he pointed out, is 7.7 points below, with respect to income compared to to GDP. The minister has placed in this context the measures that are underway to combat fraud, the review of certain tax benefits and the tax reform in some points where Spain is behind the community partners: companies, environmental taxes , or new digital businesses, among others.

In order to undertake this reform, María Jesús Montero has defended that, although “it is naive”, a debate must be approached with “intellectual rigor” regarding taxation, compared to the potions that “some political forces” are assuming. “If your model is that the money where it is best is in the pocket of the taxpayers, I tell them that not everyone has money in their pockets,” he defended, alluding to the need for the exit from this economic crisis to be done by building a “fair and sustainable” growth compared to the recipes of the previous crisis that generated “more inequality”. The minister has also charged against the “delegitimization” that according to her claims the right with respect to certain tax figures.

Thus, Montero defends that the Government will wait for the report of the committee of experts, with the commitment, he pointed out, that it does not entail a tax increase for “the middle and working classes.” For the rest, he recalled that the IMF or Joe Biden’s administration are advocating a model in which “whoever has the most pays the most,” pointing out that this will be the line of fiscal reform. “What we are proposing is to get closer to European standards,” Montero pointed out.

The minister has defended that it is necessary for Spain to improve its fiscal pressure to be able to address situations such as the one that has caused this health crisis without having to resort to “high” levels of debt and deficit. Montero has argued, therefore, that these reforms are essential to be able to receive the 144,000 million euros from the European Commission, which involves making commitments. Commitments that, as he has pointed out, should not be forgotten by the Autonomous Communities either. Without citing any, the head of the Treasury has warned that “it cannot be” that while the central government is making these efforts, “some communities ask for more support while lowering taxes.” “It is a great political incongruity,” he said.

Despite the progress expected by the Government with the tax reform project in terms of collection, Montero has acknowledged that the recovery plan will not be enough to be able to reach the European average in tax pressure. “A calendar will be needed beyond the recovery plan,” said the Minister of Finance.

The also government spokeswoman has also responded to questions raised by the open front by the Ministry of Transport about the possible charge for use of the main road network of the State. The minister has limited herself to expressing that the system “is not taxation” nor is it a “toll” and that it is up to her fellow Executive, José Luis Ábalos, to outline how a measure would be applied that, on the other hand, has defended that It is but “homologate” Spain with the situation of the European Union, something necessary to be able to receive community aid. Montero has also shown his surprise at the commotion raised by this measure since the Minister of Transport had already raised it in the past.