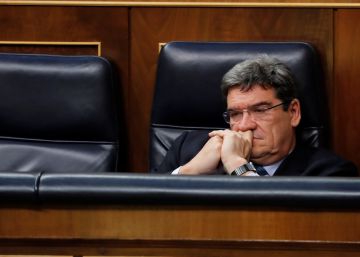 Before becoming minister, José Luis Escrivá I already warned about the great restlessness they generated in pensioners catastrophic forecasts about the future of the pension system and the news about his bulky deficit. To put an end to this uncertainty, the now minister has proposed that the reform of the pension system have the green light of Congress in the second half of this year, as explained Thursday in an appearance before the Labor Committee of the Congress of the deputies.

It is not the only task that has been imposed for the first leg of the legislature. Escrivá He also wants to have the minimum vital income ready in 2021, the cost of which would be well below 10,000 million euros, according to the calculations of the Ministry of Inclusion, Social Security and Migration.

Escrivá proposes the management of his department focused on three major consensus that coincide with the three competences included in the name of his ministry. To address the first, inclusion, the minimum vital income is raised. And for the second, Social Security, prepares the pension reform, which should be ready in the second half of this year. The new minister starts from a phrase he repeated with the reassuring spirit he showed when he was president of Airef (the independent tax authority): “Social Security is solvent.”

Escrivá wants to scare away the uncertainty caused by the current situation, in which to the Social Security deficit – more than 18,000 million euros since 2016 – the gloomy forecasts are added, with which it is very critical. In order to solve this hole, the minister proposes to download to the pension system of expenses that he considers that they should not fall on him, for example, the reduction of contributions as policies to help with contracting.

The minister has requested that an agreement be reached soon in the Toledo Pact to give certainty because citizens’ concerns about pensions have grown, as he has stated, showing surveys on developments in recent years. It has also linked the work of this commission to the annual revaluation, in which it has indicated that pensions should not lose purchasing power. “It has to be a common objective that next year, when we update the pensions, we will do it on a stable framework. That being the common objective,” he said in his appearance.

That would mean ending a part of the pension reform of 2013, which linked the revaluation of pensions to the economic situation of Social Security and determined for several years that these benefits rose 0.25%. However, it has been suspended since 2018.

This Escrivá announcement of having the pension reform ready soon comes just one day after the European Commission rebuked Spain for not adopting measures to ensure its future sustainability.

A demanding Escrivá agenda has also been imposed when developing the Minimum Vital Income included in the Government pact. Its intention is that already in the budgets of 2021 there is a heading for its implementation. To justify its development, the minister highlighted in his presentation the inequality in Spain and the lack of effectiveness of aid and public policies to reduce it.