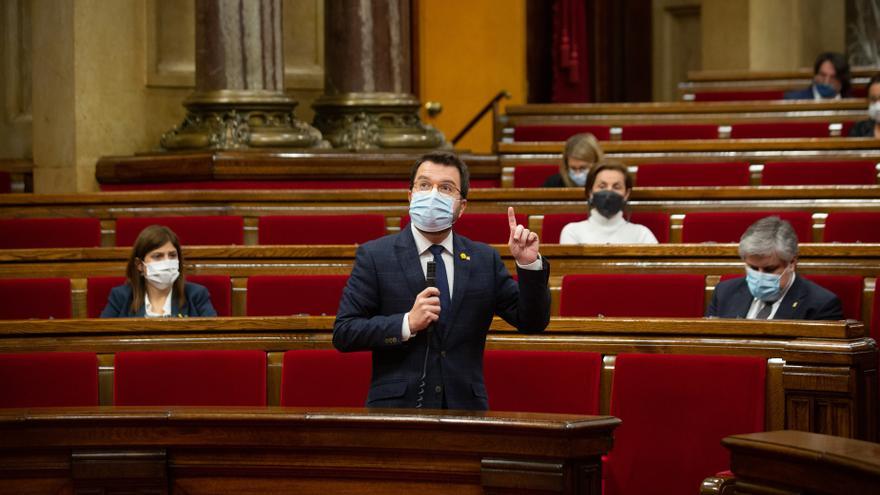 If the agreement between the central government and ERC ends up being fulfilled, the Generalitat de Catalunya will manage the Minimum Vital Income (IMV), one of the key policies implemented by the executive during the pandemic that, however, has recently been tarnished by the difficulty of many users to access the benefits it provides. This was announced this Wednesday by the Vice President of the Government, Pere Aragonès, and the Republican leader in Congress, Gabriel Rufián, who have announced the ‘yes’ of the 13 ERC deputies to the Budgets.

The leaders of ERC have shown their chest for the transfer of the management of the IMV benefits, as it advanced this Tuesday Digital was born, which are the highlight of the policy package that they have achieved in the framework of the negotiation of the Budgets with the Government. Republicans recall that until now only Euskadi and Navarra, the autonomous communities, had had the ability to manage this aid recognized. For its part, the Generalitat demanded the transfer from the same moment that these aid were approved in Congress, last June, understanding that the autonomies have the powers in social protection benefits.

The management of these presentations will be carried out “from the Generalitat and with personnel from the Generalitat,” said Aragonès, who highlighted that in addition to the funds necessary for the presentations, it has also been agreed that the State provides the necessary funds pay management fees. However, the vice president has recognized that Catalonia will not have the regulatory capacity for these grants and therefore, to modify the conditions of access they will use the law of guaranteed income, which is controlled by the autonomous communities.

For their part, Sources from the Ministry of Inclusion and Social Security point out that the law approved in Congress already provided for the option of the autonomies to take over the reins of these aid once they were deployed. The regulatory framework of the IMV provides that the Government can sign agreements with the communities for the management of benefits, and marked the year 2021 as the date on which they would begin to agree on autonomous collaboration mechanisms.

The transfer of the jurisdiction of social protection benefits is, for Republicans, one of the most visible achievements of the negotiation, but not the only point that they have boasted this Wednesday at a press conference. As detailed by Aragonès, the Government has committed to ensuring that 19% of total investments and transfers go to Catalonia, which amounts to more than 2,300 million and exceeds the percentage of Catalan GDP for the first time.

The bulk of the list of commitments obtained by ERC is of an economic and social nature. As Rufián had announced this Tuesday, another of the demands achieved is to end the financial control that the Ministry of Finance exercised over Catalan finances since 2015, a condition imposed in exchange for the Generalitat’s access to the Autonomous Liquidity Fund, of which the Catalan administration had already left almost two years ago.