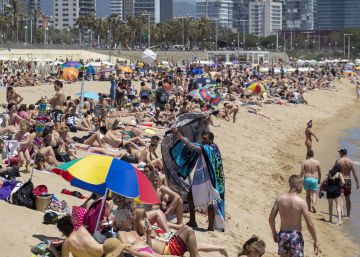 Despite the Fall of the month of May, the Government trusts that this summer the records of travelers' arrivals and tourist spending will again be beaten. Specifically, the Ministry of Industry, Trade and Tourism expects that Spain will visit 29.6 million foreigners in high season, half a million more than last year, and spend another 1,000 million euros, until reaching the 34,000, and follow growing employment. To sustain this optimism, it relies on the main markets, the United Kingdom and Germany, which recover from the declines of last year, and the growth of the US and China.

In a meeting with the media, the Minister of Industry, Commerce and Tourism, Reyes Maroto, has been very optimistic about the high season of the tourism sector. "The trend is positive in tourist flows and spending," he predicted after summarizing the data recorded until May, which shows an increase of 2.7% in the arrival of tourists and 3.8% in spending of tourists, who leave "new historical highs" of both figures to date.

However, in May there was the first fall of the year compared to the past (1.6% fewer arrivals), a significant figure considering that competition from other destinations such as Turkey or Egypt is more evident in the sun and beach, which is now when it starts. In fact, during July, August and September last year, 29.1 million tourists visited Spain, 2.2% less than a year before, and the summer closed no record for the first time since 2011. The Government had predicted that the figure would surpass 30 million.

This year is more modest in its forecasts and remains at 29.6 million, 1.7% above 2018, with half a million more visitors. Asked where those thousands of additional visitors will come from, Maroto pointed out that "the priority markets, the United Kingdom and Germany, continue to be the ones that contribute more volume and expense" and also have the "double-digit growth" of other markets. like the USA, "thanks, among other things, to the fact that air connectivity has increased," said Maroto, and China, where the minister has recently traveled to "define new products suitable for the Chinese market," and where the Government has led carried out an "intense" promotional work to increase the capture of a market of 146 million tourists of which Spain alone is capable of attracting one million.

As for the first two markets, the minister has indicated that "has been contained" the fall recorded last year, in the case of the British, and that it recovers against the decline last year, in the case of the Germans. In the first five months, the number of Britons has remained almost identical, while four million Germans have arrived, 1.9% more, but in May there are decreases in both markets, especially German, with 8% fewer visitors compared to May of last year.

As for spending, the Government forecasts a total of 33,908 million euros, 1,079 million more (+ 3.2%) than last summer. The minister has celebrated the "increase of the profitability that supposes that it grows more the expense that the arrivals", that is the objective of the tourist policy of the Government.