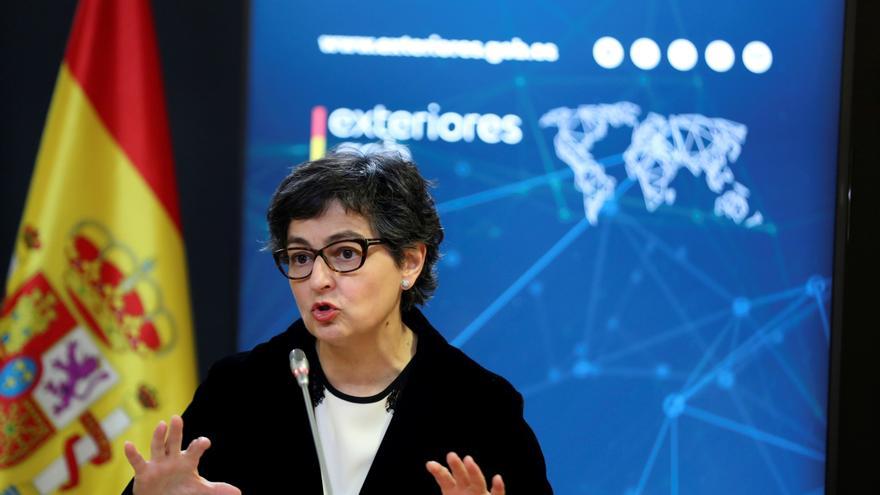 Spain and the United Kingdom must reach an agreement on Gibraltar before December 31 to avoid a “hard brexit“in the gate that would force to establish the control of goods and people, except for cross-border workers who have registered as such, which will have a specific document that will allow them to move freely. The rest must comply with the requirements of any external border of the EU, as explained at a press conference by the Foreign Minister, Arantxa González Laya.

At the headquarters of the Ministry, the Foreign Minister stressed that the agreement reached on December 24 between the United Kingdom and the EU “does not apply to Gibraltar” so it is necessary to reach a “separate agreement that Spain is negotiating with the United Kingdom. United and that is not yet concluded ”. “If there is a principle of agreement, we could modulate mobility on the border with Gibraltar, and if there is no principle of agreement, it is the external border of the EU with a third country and modulation is impossible,” the minister assured after stating that ” there is no plan B, there can be no plan B ”. “An agreement in principle can be perfectly reached between now and December 31,” said the minister.

If there is no agreement before December 31, Spain will have to control the border with Gibraltar with “scrupulous observance” of all EU rules on external borders, so all citizens who want to cross the gate will need a passport visa “as with any third country“.

Being a “third country” means that the citizens of Gibraltar would no longer have access to Spanish Social Security, would be left outside the European airspace, would need a specific recognition of the driving license and the insurance of their vehicles, etc., the minister has detailed, who has pointed out that “we are not inventing anything new, it is what happens with third countries”. In addition, it will be necessary to establish police, phytosanitary and security controls on the goods of the more than 200 trucks that cross between Gibraltar and the Campo de Gibraltar every day, which entail “more controls, waiting times, queues and costs”.

By contrast, Spain is seeking an agreement that allows “to simplify mobility procedures as much as possible, with the possibility of even lifting the gate.” To achieve this, “it will continue negotiating until the last minute of 2020. It will not be for Spain,” said González Laya, for whom “it is not enough that our country wants, the United Kingdom must wish it in the agreed terms.” According to the minister, all the technical measures have already been detailed, “now the political will is lacking.”

Asked if the negotiation period could be extended, the minister stressed that “a few more days would not be a problem for Spain”, but that it was the United Kingdom who marked the December 31st as the final deadline for your exit process from the EU. These negotiations are presided over by the existence of “a great disagreement” between Spain and the United Kingdom on the sovereignty of Gibraltar, an “inalienable claim of Spain” which nevertheless considers that the negotiations can be resolved favorably “without renouncing our claims regarding the sovereignty, we can agree to disagree on sovereignty, without it being an obstacle to facilitate mobility in the area. ”

In addition, González Laya has detailed that, in anticipation of the application of the global agreement, the Government plans to approve in the Council of Ministers this Tuesday a package of specific “adaptation measures” for the different sectors affected by the departure from the United Kingdom of the EU, especially the fishing, automotive, transport and security sectors, among others.

About 15,000 workers and 200 trucks cross the gate daily, and for the El Campo de Gibraltar region, the relationship with the colony accounts for a quarter of its gross domestic product and contributes about 120 million euros a year.

Tags: 31, agreement, b, beginning, December, Gibraltar, government, He says, Kingdom, no, plan, there is, to get, trust, United