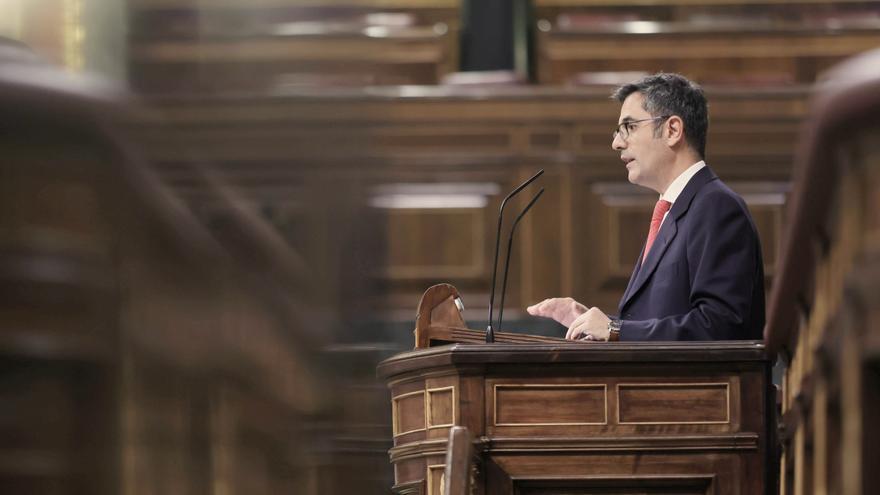 The Government has managed to carry out a new extension of the so-called ‘social shield’. Until next October 31, the suspension of evictions and the prohibition of cuts in energy supplies for vulnerable families will be maintained. Congress has endorsed by a large majority the decree law that the Council of Ministers approved on August 3 and that the PP has supported, as well as the parliamentary allies of the PSOE and United We Can coalition. Vox has abstained and Ciudadanos has voted against.

The Minister of the Presidency, Félix Bolaños, has defended that the measures of the ‘social shield’ manage to protect 1.1 million citizens. “Just the title [del decreto] It is a declaration of intent, “said Bolaños, who has insisted that the recovery from the crisis caused by the coronavirus will be” fair “and has contrasted it with the one managed by the PP since 2011.” The exit was slow, unfair and incomplete. This is being fast and fair, “said the socialist.

The government’s parliamentary allies have endorsed the decree amid warnings about the increase in the price of electricity. Thus, the majority of parties have agreed that the measures are a “patch”. It has been a term used by other spokespersons, such as Citizens, who have voted against the initiative.

Even the spokesperson for United We Can, Pilar Garrido, has taken advantage of her intervention to address the issue of light, which is one of the issues that has divided the coalition in recent weeks. “It is speculation that occurs by the energy oligopoly that puts the bill through the roof,” he defended before referring to the real estate sector, which he accused of the rise in rental prices – another of the issues that distance to the socialists of his minority partner. “It is time to end speculative markets and the rentier economy,” said Garrido, who has opted for “effective measures that regulate the energy market effectively and a housing law that finally puts housing as a right because we are going on the way to making it a luxury. ”

The PP, for its part, has changed its position with respect to the one it has maintained in previous votes of the social shield in which those of Pablo Casado voted against, as in the February decree and in the May extension. The main criticism of the PP was the conditions for the suspension of the uprisings and it even brought the decree approved by the Government in January before the Constitutional Court, considering that it “facilitates the occupations.” The text of two separate decrees of the Government establishes that “in those other criminal proceedings in which the launching of the habitual residence of those people who are living in it without any qualifying title for it is substantiated, the Judge will have the power to suspend the launch” .

elDiario.es has consulted the popular group why the change of position is due and they have referred to the words of their spokesperson, Rosa María Romero, who has not made any reference to the matter beyond criticizing the Government when considering that the shield social “has failed”, among other things because “foreclosures of the main house have doubled and 11,000 families have been left homeless.” However, he has announced that his group “out of responsibility will support this decree and the extension of these social measures because citizens are not to blame for this bad government” and has even warned that the Executive will have to prepare a new one to expand protection beyond October 31.

Vox has abstained. The deputy Patricia de las Heras has dedicated a good part of her speech to charge against the Minister of the Presidency, Relations with the Courts and Democratic Memory in terms identical to those used by the spokeswoman, Macarena Olona, ​​in the appearance last week. Both have described Bolaños as Moncloa’s “legal brain”. “The strange thing is that he is not sitting in the dock; resign, Mr. Bolaños,” De las Heras has finished.

Also PP, Vox and Ciudadanos have taken advantage of the debate to launch warnings about the increase in the price of electricity. “Every day he beats a new record. This is a nonsense that has no end,” said the conservative deputy, who has assured that it is a “dishonorable record” for Pedro Sánchez. Also the deputy of the extreme right has said that the price of electricity has grown by “220%” and has pointed out that the Government should take measures on the tolls and taxes that constitute the bulk of the bill (VAT has already been lowered ). Despite his abstention, De las Heras has assured that the validated decree has a “communist measure” that allows the “indirect expropriation of the houses of the Spanish” in reference to the possibility that a judge paralyzes an uprising of a house for who do not have a “qualifying title”. “The situation is becoming unsustainable,” said Citizen spokeswoman Sara Giménez, referring to the price of electricity.