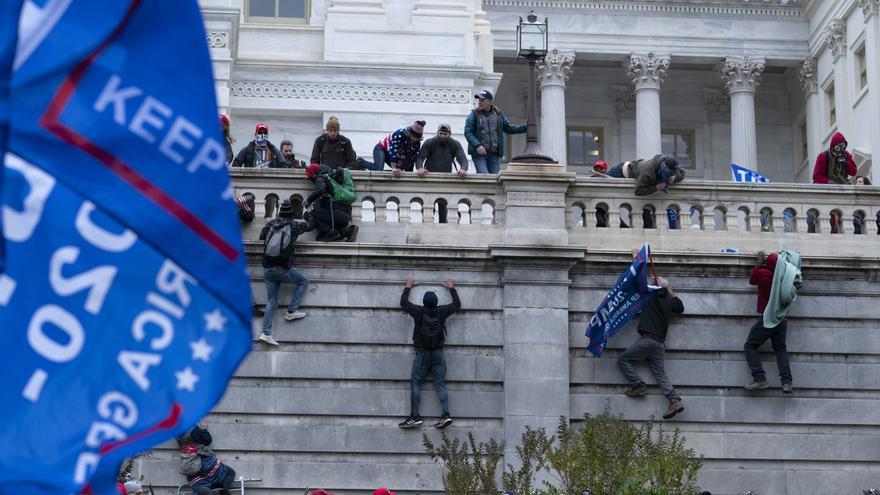 The assault on the Capitol perpetrated by supporters of Donald Trump this Wednesday has become a new weapon in Spanish politics. PP and Vox have compared the violent irruption in Washington encouraged by the still tenant of the White House who insists on a false electoral fraud with the demonstration ‘Surround the Congress’ that took place during the inauguration of Mariano Rajoy in 2016. The Government rejects that comparison and warning of the hate speech that is also sown in Spain, questioning the legitimacy of Pedro Sánchez’s cabinet.

The president was among the first to react to images of the assault on the Capitol Thursday night. “I am confident in the strength of US democracy. The new presidency of Joe Biden will overcome the stage of tension, uniting the American people,” he said on his Twitter account. “Democracy is based on the peaceful transfer of power: whoever loses has to accept defeat,” said the Foreign Minister, Arancha González Laya, on the same social network. Asked in an interview in the Cope about the comparison of that irruption with the ‘Surround the Congress’ or the independence mobilizations in Catalonia, the economic vice president, Nadia Calviño, has rejected it categorically when remembering that “the only time someone has broken in was in the coup “of 23F. “It is not necessary to make comparisons that do not correspond”, has sentenced Calviño, who has warned of the danger of hate speech that “is not exclusive to the United States” and has recalled the “questioning” in Spain of the “legitimate” coalition government .

The second vice president and leader of United We Can, Pablo Iglesias, has warned that the events in Washington are the actions of the extreme right. “The blatant lie as a political weapon and the attempt to subvert institutional mechanisms when they are not favorable to it,” said the vice president. “PP and Ciudadanos are comparing (psychotropically) Trump’s coup attempt with the 15M because to condemn it would be to recognize that the VOX benchmark, which supports their governments in Murcia, Andalusia, Madrid or Zaragoza, is an ultra-right coup leader”, was the response of the spokesman for the confederal group, Pablo Echenique.

In similar terms, the number two of the PSOE, Adriana Lastra, recalled that “democracy has two premises: whoever has a majority governs and whoever loses assumes the electoral result as legitimate”: “Democracy must be cared for and defended every day” .

PP and Ciudadanos condemned the assault on the Capitol. The head of the opposition, Pablo Casado, called it “unacceptable”: “Democracy is based on parliamentary representation that cannot be coerced.” But given the institutionality of the party president’s tweet, his number two, Teodoro García Egea, went a step further by condemning “every attack in Spain cheered by populism.” Thus, he compared the violent irruption in the US capital with the demonstrations before institutions in Spain. “Those who surrounded Congress in 2016 and threw stones at deputies and those who demonstrated before the Andalusian Parliament in 2019 against political alternation: the radicals who rule today.”

The internal arguments that Genoa sends to his public offices claim to link what happened in the US with demonstrations in Spain. “It is unfortunate that a great nation like the United States suffers this institutional crisis that the outgoing president must tackle and that we trust that the president-elect will overcome,” says the PP in these slogans: “In the same way that we condemn this assault, we have also done it against all attack cheered in Spain by populism. In 2012, the CDR attempted to assault the Parliament, Sánchez’s partners, the same ones he now wants to pardon. In 2016, those who surrounded Congress and threw stones at deputies. And in 2019, those who demonstrated before the Andalusian Parliament against political alternation. Those are the radicals who govern today. Incoherence of those who ‘surround Congress’ criticizing those who ‘assault the Capitol’ “.

The Vox leader, Santiago Abascal, had spoken along the same lines, questioning that “the assault on the Capitol seems so bad to the progressive left,” which he compared with the mobilization in front of Congress or with the independence process. “The democracies of the West have to show their strength in the face of the revolutionary processes that the elites have stupidly promoted,” said the leader of the extreme right. “Spain has an electoral appointment in a few weeks. That is why today is a time to reiterate our demand. to all political forces so that they commit to respecting electoral acts, democracy and coexistence. That the violent ones remain alone and appear before the courts. And that they are not in governments as is the case in our country. ”

“Neither a coup d’état in the United States like the progressives crying right now or anything like it. A large part of the brave American people is fighting to preserve democracy and to demonstrate a sung electoral fraud”, said the Vox candidate in Logroño, Adrián Belaza, who later deleted the tweet. Vox has questioned the election result in the US for weeks.

Ciudadanos has maintained a more institutional profile, although some of its positions have also spoken in terms similar to the PP when comparing the assault on the Capitol with that of the Congress. “The news and images that come from the United States Capitol are very worrying. A group of radicals is trying to alter the constitutional and democratic order by force. How much damage does populism do and how dangerous is populism,” said Inés Arrimadas. “Our rejection of the totalitarian attempt to take over the Capitol to sabotage democracy in the US. Democrats respect institutions and sovereignty. Nationalism and populism seek to undermine them,” was the party’s official reaction.

However, some of his charges have been pronounced in terms similar to those of the PP, such as Toni Cantó, who tweeted some images of Surrounding Congress. The former president of Ciudadanos, Albert Rivera, was one of the first to make that comparison. “What Trump is doing today is what Podemos did in Congress in 2016 and the PSOE in the Andalusian parliament in 2019,” Rivera said.