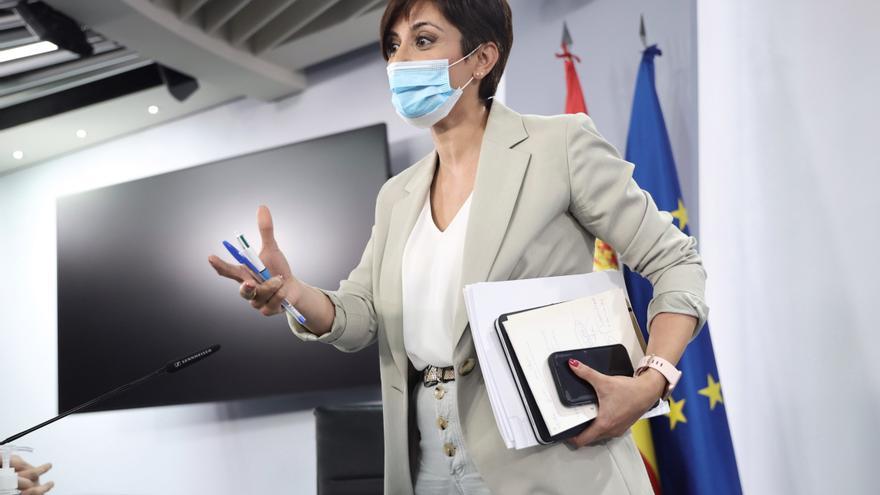 The Government refuses to give explanations on the alleged spying on independence leaders, including the president of the Generalitat, Pere Aragonès, through software that is only available to governments under the premise that it is a matter of national security. The spokeswoman, Isabel Rodríguez, has made an effort to disassociate the Executive from this espionage and has assured that any action of this type is legally protected by a judicial mandate. “Spain is a democratic state with full rights. Any limitation of fundamental rights requires a reasoned judicial decision”, assured the socialist minister, although from Moncloa they avoid saying if there has been an express authorization to investigate 65 people (sovereignty leaders, their lawyers or relatives) whose terminals were infected between 2018 and 2020 by the Israeli cyber espionage system Pegasus, as revealed by Citizen Lab.

"It is very important to understand that we are in a context of national security where by law there are matters that must be dealt with secretly," Rodríguez added: "We abide by the law." Despite the lack of explanations, the spokeswoman maintains that the "Government has absolutely nothing to hide." She also has not wanted to clarify if the CNI uses Pegasus since the Ministry of the Interior denies using the services of the supplier company. “When these types of questions are raised, there are matters that, because they deal with national security, the security of all of us, are protected by law and are classified matters, secret matters about which I cannot tell you. The law prohibits me ”, Rodríguez has taken off, who has indicated that the Minister of Defense, Margarita Robles, will appear in Congress.

“This is a democratic and legal country. There is no spying, no conversations are intervened, information is not intervened if it is not under the protection of the law and the right. Therefore, there is an absolute guarantee that the state works and democracy is complete", added Rodríguez, who has assured that the Government "will collaborate to the maximum with the justice system in the investigation of these events" if they reach the courts and the Judges request information from the Executive.

In Moncloa they ignore the request for an internal investigation made by United We Can, who has warned that they have to “roll heads”. Sources from the socialist wing maintain that in the coalition there are no problems with this matter since they frame the anger of the minority partner in the parliamentary group. Nor do they consider that the scandal is going to put the Government of Pedro Sánchez at risk due to the loss of confidence of its parliamentary allies, especially ERC and Bildu, who are the main affected by this espionage. The PNV has also demanded light on the matter. Government sources assure that it will not affect the relationship with the Generalitat with which they maintain that they are in "permanent contact" suggesting that it is also on this matter. “We keep moving forward”, they point out in Moncloa about the 'Agenda for reunion' that he put on the dialogue table, which has not met since September.

“This government has shown signs of wanting to overcome the political conflict, taking it precisely to that political sphere to remove it from the sphere of justice. The actions of this Government have been decisive, the commitment of this Government, to restore tranquility to coexistence and to the Catalan citizen. It is a verifiable fact, it is an evident fact: today Catalonia is not the Catalonia of 2019 or 2017”, Rodríguez expressed.