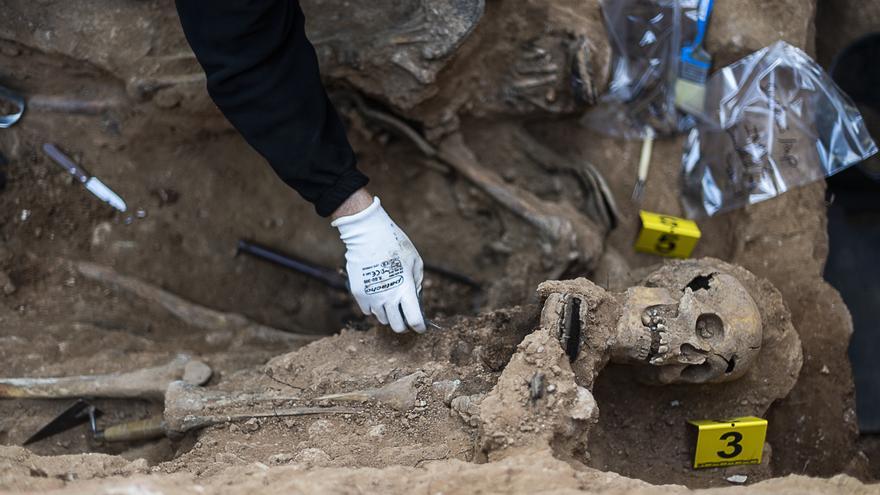 The Government intends to remove historical memory from economic oblivion. The draft General State Budgets for 2021, delivered this Wednesday in Congress, allocates a total of 11.3 million euros for this item that Mariano Rajoy left zero since 2013. The Executive thus recovers the financing for one of its political banners after the PP completed eight years without allocating a single euro. The amount doubles what was consigned in the legislatures of José Luis Rodríguez Zapatero, but it is cut compared to the project that the Government of Pedro Sánchez raised in 2019 and for those who did not get enough support, which culminated in an electoral call.

The last item for this matter, aimed at the works of exhumation of remains, reparation of victims of the Franco regime and promotion of historical memory, is from 2012, when the Ministry of the Presidency, led by the popular Soraya Sáez de Santamaría la reduced by 60%, going from 6.2 million in 2011 to 2.5. From then on, the popular government was fulfilling year after year with the promise that Rajoy had made when he was in the opposition not to give “not a single public euro” to this matter, as he declared in 2008. Then he also affirmed that he would eliminate the Articles of the Historical Memory Law referring to public financing. When she arrived at La Moncloa she did not do so, but she did repeal the de facto rule by leaving her without money.

The accounts, for which the Executive of the PSOE and United We Can they take it for granted that they will have enough support, represent an increase in social spending in the midst of the coronavirus pandemic and an unprecedented economic crisis with enormous consequences for the country. In this context, assured the Minister Spokesman and Head of Finance, María Jesús Montero, the presence that historical memory once again has in the Budgets shows the “commitment of the Government” in this matter when “there is revisionism by other political forces,” he said. at the press conference after the Council of Ministers that approved the project.

The first year that there was state funding for this purpose was in 2005, with 1.21 million euros. Two years later the Historical Memory Law was approved and the item gradually increased until 2011. The rule will be expanded “before the summer of 2021”, according to the Government, by the Democratic Memory Law whose preliminary draft the Council of Ministers approved in first reading a little over a month ago. The text, which is currently in its consultative phase, incorporates several pending measures required of Spain by the United Nations, such as the resignification of the Valley of the Fallen, the annulment of Francoist sentences or the assumption of the exhumations of graves as State responsibility.

In this sense, the budget project establishes a transfer of three million euros to the autonomous communities “for expenses derived” from the application of the Law of Historical Memory, specifically, for the “plan of exhumation of victims”, according to you can read in the project delivered today to Congress. Within the framework of the future law currently being processed by the Executive, the First Vice President of the Government and Ministry of the Presidency, Relations with the Courts and Democratic Memory, Carmen Calvo, already announced in July this exhumation plan in collaboration with the autonomous communities and town councils. However, there are no further details on how this will be done at the moment.

Along with this transfer, the accounts for 2021 allocate 105 million euros as an “exceptional subsidy to the Seville City Council for actions in the Pico Reja pit” and 1.8 million for families and non-profit institutions: 895,000 for subsidies to entities for expenses derived from the application of the 2007 law and a 1 million euro subsidy to the Spanish Federation of Municipalities and Provinces (FEMP). This is in addition to the subsidy granted last September also to the FEMP for municipalities to locate and exhume graves of disappeared victims of the Franco regime and the Civil War, which had been a commitment by Calvo while the budgets were being processed.

While waiting for how these three million euros will be implemented for the autonomous communities, several memorialist associations have already shown their opposition to the exhumations being carried out through subsidies, because you think that it is actually the State itself to directly take charge of these interventions . The model was already used by Zapatero, who in the accounts allocated a proportion to these works via subsidies, but some organizations such as the Association for the Recovery of Historical Memory (ARMH) have announced that they will decline to participate.

In Spain, according to the official Grave Map, there are more than 114,226 missing persons lying in graves. But according to a recent investigation, the doctoral thesis entitled ‘Archeology of Memory: the archaeological method applied to recent history’ by Lourdes Herrasti, doctor in History from the University of the Basque Country, only 9,009 victims have been recovered in 743 exhumations among the years 2000 and 2018.