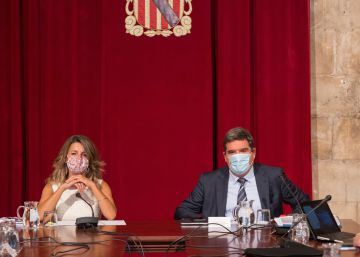 The Government plans to finally approve in the Council of Ministers this Tuesday the new conditions to extend until next January 31 the temporary employment regulation files (ERTE). The Executive will almost certainly have the guaranteed support of the CC OO and UGT unions for their latest proposal, although employer sources specified that after the latest proposal from the Ministry of Labor “it is not possible to speak in agreement” by the employers to give the go-ahead to the new conditions to extend the current force majeure ERTEs and enable new adjustments for all companies whose activity has been damaged or will be damaged by the second wave of the Covid-19 pandemic.

Already on Monday morning, the president of the CEOE employer, Antonio Garamendi assured: “I would like to reach an agreement on the extension of the ERTE, because we are pactists and we have demonstrated it on many occasions, but they are making it quite difficult for us ”. However, the Executive Committee of CEOE-Cepyme will have the last word in a meeting scheduled for early tomorrow. Also the executives of the unions CC OO and UGT meet to close some fringes of the text and obtain the support of their leaderships.

In any case, Garamendi assured that the employers will accept the “legitimate” decision of the Executive to approve this extension in the Council of Ministers tomorrow and added that the businessmen “will continue to collaborate with the Government” although they do not finally endorse the terms of these measures.

The new offer of the Executive maintains to extend the ERTE of force majeure, which now affects some 600,000 workers, mainly companies in the tourism sectors (hotels, travel agencies, aviation, a part of passenger transport) – that are registered in the tourism and some leisure headings in the official classification of activities. This, according to businessmen complain, would leave out more than half of the current beneficiaries of an ERTE due to force majeure.

For this reason, to compensate for this circumstance, the Ministries of Labor and Social Security have proposed, on the one hand, to extend the exemptions from business contributions for workers who remain in the current ERTE due to force majeure (to an 85% discount in companies of less of 50 workers and 75% in those with more than 50 employees during the months of October and November; and 70% and 60%, respectively in December; and 60% for those under 50 workers and 50% in the older, during January).

Along with this, the Executive proposes that companies that do not belong to these protected sectors but that are part of the value chain of said tourist and leisure activities and that can prove it with billing criteria, may also continue in the ERTE of force majeure already started.

But in addition, according to what has transpired so far, the figure of regrowth ERTE would be made more flexible – which are applied from July 1 to companies that had to close due to new restrictive measures caused by regrowth – so that Companies with partial activity limitations (due to capacity restrictions, for example) could also take advantage of these force majeure adjustments due to the rebound in infections. The aforementioned decreasing exemptions would also be applied to this new modality of ERTE.

The extension of the protection of workers affected by ERTE has not been the subject of controversy this time. For these, the amount of their unemployment benefit will be kept at 70% of the regulatory base from the sixth month of collection (until today this amount was cut to 50% of said base).

In addition, the Minister of Labor, Yolanda Díaz, already advanced last Thursday that the period of unemployment benefit that will be restored to those affected by ERTE – known as ‘counter to zero’ – will rise from 180 to 196 days. The minister also confirmed the creation of a new benefit for discontinuous, temporary and part-time workers who have not collected enough contributions.