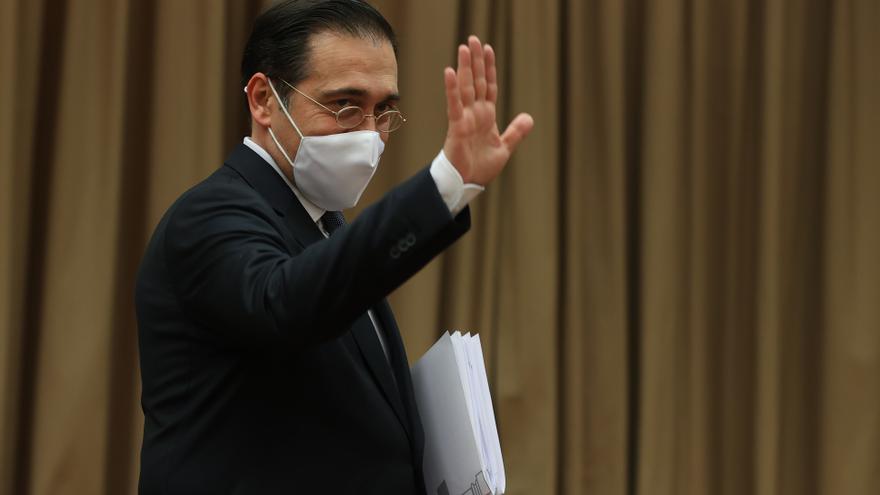 The Government has no doubts about where to place itself in the Ukraine crisis. Unlike France and Germany, which view with some nervousness the urgency of the decisions taken by the Americans and the British, the Foreign Minister made it clear on Tuesday that Spain categorically rejects Russian military pressure on Ukraine and even defends the right of Ukrainians to apply for NATO membership in the future. At that point, José Manuel Albares went further than in the public statements of recent days. This time the traditional diplomatic ambiguity was not heard. Basically, the minister said what Joe Biden wants to hear from his European allies.

Albares appeared in the Foreign Commission of the Congress one day after the meeting of the EU ministers dedicated to the crisis. So far the government has made decisions, such as sending a frigate to the Black Sea, that are within its powers and its obligations to other NATO countries. But if the mission goes from taking place in a situation of peace, however much tension there may be, to one of war, the legal doubts about Spanish military involvement would be of another type. Ukraine is not a member of NATO, so Spain is not legally obliged to help it. If he does it together with his allies, it would be a political decision on which Congress should have the right to state its position.

The minister summarized the Government's priorities in four concepts: "Diplomacy, de-escalation, de-escalation and dissuasion". They all start with the same letter, but there are differences. The first is the essential tool. The second and third form the desired outcome. The latter is a response to this crisis that seeks to send a firm message to Russia so that it does not use its military superiority over Ukraine. Therefore, Albares defined NATO's action as a response to the threat of a hypothetical Russian offensive without currently contemplating the use of military force.

Albares disqualified the positions expressed by the Russian Government. He said his military deployment with tens of thousands of soldiers around the Ukrainian border "is not justified on defensive grounds." Moscow's demand that Ukraine not join NATO is unacceptable for violating international law. "Russia cannot expect us to accept a limitation of the sovereignty of the states of Central and Eastern Europe," he said. That in theory is logical and corresponds to the obligation to respect the sovereignty and territorial integrity of any European country. The minister went so far as to state too optimistically that "the international order based on spheres of influence", typical of the Cold War, belongs to the past.

Apparently, the government is not afraid of making Moscow uncomfortable. Albares defended, at least in theory, the right of Kiev to ask to join NATO, because "it is up to the Ukrainians to decide if they want to join an organization", also on defense. "We cannot tell the Ukrainians what to do."

There the minister was carried away by the passion of the moment and went much further than Biden himself a week ago at a press conference: "The probability that Ukraine will join NATO in the short term it is not very high", said the president of the USA, as an example of the negotiation that can be proposed to Putin. What he will not accept is a Russian veto right to future accessions, but at the same time he can be told that they are unlikely in the next few years and that they can be discussed with Moscow beforehand.

The Atlanticist position and very critical of Russia of the Government of Sánchez could have received the support of the Popular Party. This is not what happened, because his spokesperson, Valentina Martínez Ferro, was not very interested in talking about NATO or Ukraine. She preferred to focus on procedural issues and government relations with the opposition. He complained that Pedro Sánchez had not appeared instead of his minister –Boris Johnson did it this week between parties–, made fun of the photos of the president speaking on the phone and referred to the differences between the PSOE and Podemos in this matter. She argued that Sánchez does not have a more relevant role in the crisis because of that division, although it is unlikely that Joe Biden knows who Ione Belarra or Pablo Echenique is.

The phrase that best defined his speech was this: "This is serious, Mr. Albares, this is very serious." Grandiloquence, which is not lacking in Congress. In fact, the situation is so serious that it was not possible to know the ideas of the PP on this crisis. He did ask the minister several questions for him to answer as his great contribution to the debate. "His position has not been clear to me," Albares replied. Of course, he hadn't told her.

The PP bet heavily on a confrontation between the two members of the coalition government. United We Can did not grant him that victory. Antón Gómez-Reino supported the minister in the search for a diplomatic solution and blamed the crisis between the United States and Russia for using Ukraine to benefit their interests. Unlike other pronouncements from the left, the UP deputy did not want to give special treatment to Russia and only focus his criticism on the US. Gómez-Reino spoke of the "ultraconservative drifts" of the Russian political system that have characterized Putin's policies. He could have mentioned the persecution of feminist groups and the LGBTI community and the defense of a conservative program based on the legitimacy of the Orthodox Church to run the country.

What he did do was remind that "the extreme European right are allied with Mr. Putin", which caused some Vox deputies to start muttering. Perhaps the extreme right is not in favor of Russia's threats to Ukraine, but Putin's policies are what they defend for Spain.