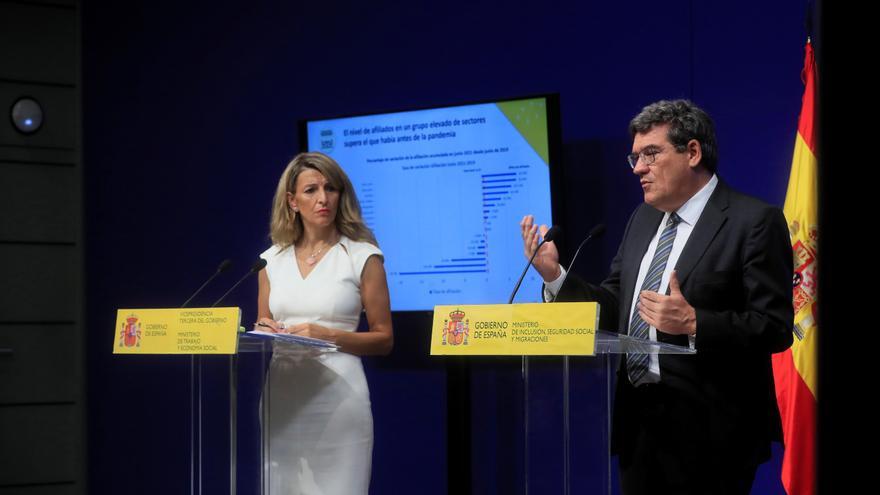 New offer of extension of the ERTE of the Government, with important changes. The Executive proposes to extend the ERTE until January 31, 2022, as requested by the social agents so that they thus provide security to companies and workers during the Christmas campaign. The Government also wants to give more importance to the training of workers in this extension, as announced by Minister Escrivá, but the Social Security has proposed that the aid in the contribution for companies be conditional on this qualification for the workforce, which has generated strong anger in the employers’ associations, sources of the dialogue explain to elDiario.es Social.

CEOE sources consider that the Executive “has presented a proposal that does not constitute an extension of the ERTE but a new mechanism, to be developed between October 1 and January 31”: This “theoretically aims to help companies but that, Among other things, it links the exemptions to a formation whose current system has been shown to be ineffective, “they criticize the employers, where they indicate that they will continue working at the social dialogue table.

This is the first government proposal for the extension of the ERTE beyond September 30, the validity of the current mechanism approved in MayTherefore, it can still change during negotiations with the majority unions and employers (CCOO, UGT, CEOE and Cepyme). Last week the social dialogue table was resumed in this regard after the summer, but the Executive did not present its approach, something that the social agents were ugly due to the lack of time to negotiate.

The extension until January 31 is not automatic, as on other occasions, but companies will have to re-file the ERTE with the labor authority. This step is a measure that seeks to reduce fraud of those companies that continue to benefit from the protection mechanism, saving the payment of salaries to their employees, without complying with the regulations.

The Government has even raised that there is “negative silence” in the process. In other words, the Administration has to resolve the request for an extension within 10 days and, in the event of non-resolution, it would be deemed rejected. This point “has generated a lot of controversy and confusion”, they indicate in UGT.

Good news, requested by both unions and businessmen, is that the Executive will carry out a special ERTE mechanism regarding the emergency on La Palma due to the volcanic eruption. It is a specific labor mechanism for the entire Canary archipelago, they indicate from the social dialogue, to protect against the consequences of the volcano.

Aid to conditional and inferior companies

The UGT union has explained at the end of the meeting that it proposes “the maintenance of the exemptions of Social Security quotas for the company to undertake training actions aimed at workers affected by ERTE”.

“These training actions must be carried out between October 1 and June 30, 2022,” indicates the union, which acknowledges that the proposal “has raised doubts about its application, execution and financing.”

Social Security sources insist that negotiations continue and do not confirm the proposal. For their part in Labor, sources from the Ministry led by Yolanda Díaz underline the will to promote training in this extension of the ERTE to improve the qualification of workers still affected by the crisis derived from the pandemic, but they do not respond on the offer of exonerations, which corresponds to the Ministry of José Luis Escrivá.

On the other hand, in the absence of knowing the fine print of the aid proposal raised by Social Security, the information released this afternoon by UGT shows that it involves reducing them in some cases. “The exemptions are unified maintaining 100% for the ERTE of impediment and 50% for companies with less than 50 workers in ERTE of limitation and 40% for larger companies,” they point out in the union. The current system, in force until the end of this month, had exonerations in the ERTE by limitation of 75% and 65%.

Minister José Luis Escrivá has already announced that the aid scheme for listing in ERTEs would change, since the current situation is quite different from what we had in May, when the last extension was agreed. With the great advance of vaccination, the Communities are eliminating restrictions against the virus and in many activities normality is returning. Of course, not yet in all, such as tourism, still affected by the lack of more international arrivals.