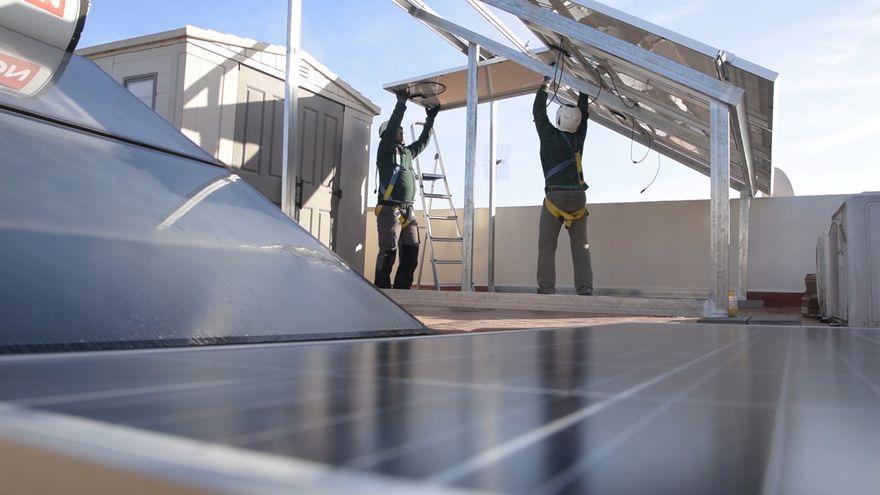 The Ministry for the Ecological Transition and the Demographic Challenge has just released the Self-Consumption Roadmap for public consultation, which proposes that this solution reach 9,000 megawatts (MW) of power in 2030, the equivalent of the installed power of nine nuclear power plants .

The draft, which is being consulted while France has announced the construction of new atomic reactors, an option that no company is considering in Spain, proposes that “this objective could increase to 14 GW installed for self-consumption in 2030 in the case of a very favorable scenario of high penetration would be achieved thanks to the multiplier effect of the measures adopted and, especially, of the additional mobilization of all agents, from civil society to the sector “.

Teresa Ribera’s department considers the publication of this document “another step forward” after the repeal of the so-called sun tax “and the creation of a favorable regulatory framework that has allowed the number of installations to be multiplied by 2.5 since 2018, up to 600 MW in 2020“.

The draft is based on a study by the Institute for Energy Diversification and Saving (IDAE) on the potential of self-consumption that this body commissioned after the commitment, embodied in the National Integrated Energy and Climate Plan (PNIEC), to put a national strategy for self-consumption is under way.

The Minister for the Ecological Transition and the Demographic Challenge, Teresa Ribera, has announced the launch of this roadmap at the inauguration of the International Energy and Climate Fair, GENERA 2021, which is held at IFEMA, Madrid. He has ensured that “it will allow the massive deployment of self-consumption, eliminate barriers and promote its application in all productive sectors, while developing the value chain and generating employment.”

This roadmap is part of the commitments included in the recovery plan, which plans to mobilize more than 1,500 million euros to boost self-consumption. The document, in whose preparation “the contribution of economic agents, administrations and citizens has been taken into account through the prior consultation convened in July 2020”, is now submitted to public information to reinforce the participation process with a view to its approval. definitive.

The ministry recalls that Spain has competitive advantages over other nearby countries for the implementation of self-consumption, having better renewable resources, especially solar energy, in addition to “a solid industrial value chain, with world leading manufacturers of investors and structures within of the photovoltaic sector, important manufacturers of small wind turbines or large engineering and development companies “.

The most used technology for self-consumption is solar photovoltaic. In 2020, about 600 MW of solar self-consumption were installed and it is estimated that there are more than 1,500 MW accumulated in Spain. The market has multiplied by 2.5 since the so-called ‘sun tax’ was repealed in 2018 and the Government enacted a more favorable regulatory framework.

The IDAE has carried out a study on the photovoltaic potential of self-consumption, taking into account the technical and socioeconomic possibilities. Its results indicate that it could reach 9,000 MW installed in 2030 in a target scenario, and that it can grow even more with the application of the measures contained in the Roadmap. With this objective scenario, self-consumption would cover a quarter of the PNIEC objective for photovoltaics, of 39,000 MW.

Most of the power in the target scenario would correspond to the commercial sector, with 5,700 MW, followed by the residential sector, with about 1,900 MW, and the industrial sector, with more than 1,100 MW. The average amortization period of the installations varies between 7 and 11 years, depending on the irradiation, the consumption profile and the type of technology used. In the territorial distribution, the most populated autonomous communities are those with the greatest potential.

The ministry recalls that the transition to a renewable, decentralized and multidirectional energy system “requires a strong presence of self-consumption systems, which represent significant savings in energy and economic costs.” In addition, this solution “constitutes a lever for the generation of direct and indirect employment from local value chains and a tool to alleviate energy poverty, since it can reduce the electricity bill, for example, in housing developments. public “.

“At the same time, with self-consumption, a better integration and acceptance of energy infrastructures in the territory is achieved, losses due to transport and distribution are reduced, unused urban space is used, the value chain associated with self-consumption and society is strengthened and developed be energetic and climate conscious “.

The Roadmap, which includes more than thirty measures to promote self-consumption, “aims to identify the challenges and opportunities of self-consumption to ensure its massive deployment in Spain, as well as to eliminate existing barriers to its implementation and promote its development in all productive sectors “. It also seeks to improve industrial competitiveness, reducing energy costs, developing the existing value chain and promoting the search for new businesses.

In turn, the creation of a National Self-consumption Table with the autonomous communities is foreseen in order to improve coordination between the different administrations, and actions are proposed to improve the dissemination, knowledge and acceptance of self-consumption by all the population.

According to the ministry, there are still “some inefficiencies that are preventing a massive introduction of self-consumption and its dissemination to all sectors of the population, such as the need for digitization and integration of storage, or its deployment in island areas and those of just transition “. And European Next Generation funds “represent an opportunity to accelerate these processes.”

In June, the Council of Ministers approved Royal Decree 477/2021 to grant 660 million euros, expandable to 1,320 million, in aid for self-consumption facilities, storage behind the meter and air conditioning with renewable energy.

With these lines, it is expected to incorporate at least 1,850 MW of renewable generation including the substitution of fossil fuels for renewable energy in heating and cooling in more than 40,000 homes. Likewise, it is estimated that this aid will create more than 25,000 direct and indirect jobs, a GDP growth of 1.7 million euros for every million aid and a reduction in CO2 emissions of more than one million tons per year. .