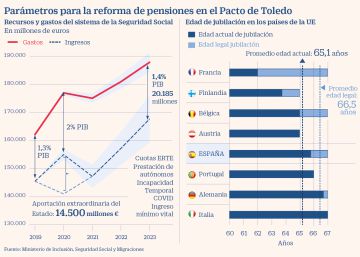 The deficit of the Social Security this year will skyrocket to 2% of GDP, clearly above 25,000 million euros due to the “transitory impact” of the Covid-19 pandemic crisis on the system’s accounts, as calculated by the Minister of Inclusion, Security Social and Migration, José Luis Escrivá, in his appearance in the parliamentary commission of the Toledo Pact.

This increase in the deficit – compared to the 1.3% registered in 2019 – is due, on the income side, to the reduction in income due to exemptions from business contributions in ERTEs and to the fall in employment, as well as a higher spending for self-employed cessation of activity benefits or excess spending on temporary disability due to sick leave due to Covid-19. As well as the decline in GDP. Although all this is without counting the transfer of 14,500 million euros that the State will transfer this year to Social Security to pay for the expenses incurred by the health crisis.

Although Escrivá has influenced the transitory nature of this greater deficit, calculating that in 2023, if no type of reform were applied, in 2021 the red numbers of the system would return to 1.3% of GDP (about 20,000 million). Although, having said this, he specified that this amount “will depend on the volume of additional State transfers because some spending policies will continue next year, but with a tendency to disappear, but it will depend on the behavior of the pandemic.”

The head of Social Security, appeared in the Toledo Pact, before the acceleration of the work of this commission to close its recommendations for the next pension reform. But, before these recommendations are produced, Escrivá has already advanced that his Department is working on several proposals, both to eradicate the current structural deficit of the system and to, in the medium and long term, increase income and contain expenses in relation to with the impact of the aging population and the massive retirement of those born in the baby boom.

Regarding the pension reform proposals for the medium and long term, Escrivá has advanced four lines of action in which Social Security is already working: the progressive transition towards a system of tranches in which self-employed workers contribute for their real income; the maintenance of the purchasing power of pensioners, linking the revaluation of pensions to the CPI; shorten the gap between the effective retirement age (now set at 64.6 years) and the legal age (currently set at 65 and 8 months and which will progressively rise to 67 years in 2027); and change the design of the incentives for supplementary social security.

Among these four issues, he has referred especially to the intention of the Government to encourage the delay of the moment of retirement, either through the redesign of the bonuses received by those who decide to extend their working life or with a different structure of the compatibility between the collection of a salary and a pension.

“We are talking about two incentives – he said – on the one hand, delaying retirement, which will mean generating an incentive system that induces more work and reforming formulas that make pension and work compatible. While, the second line that Escrivá He said that it is necessary to tackle consists of “correcting distorting elements in the regulation of early retirement.”

In his opinion “Spain is a country that offers very little compensation for the delay in retirement”, which is why he has indicated that his department is conducting a study of the labor market of people who are about to retire, evaluating the incentives that exist and analyzing why they are not used, “to design a better built system”.

Regarding the future contribution according to the real income of the self-employed, Escrivá did not want to give more details because he plans to negotiate the new quota system with this group starting next week. Although he did advance that “a good number of freelancers who now contribute for the minimum base, will contribute even less” and, at the same time, many other self-employed workers will have to contribute more than they currently do.

Having said all this, to eliminate the structural deficit of the system, which for several years has been between 18,000 and 20,000 million annually, Escriva has assured that the Government is clear – as advised by the recommendations of the Toledo Pact already agreed by the previous legislature – that Social Security must transfer to the State “indisputably improper expenses” that are now paid for by the pension system with contributions of entrepreneurs and workers worth 23,000 million euros (equivalent to 1.6% of GDP).

Specifically, the head of Social Security has referred to 11,360 million non-contributory employment policies that are being financed with contributions; 2,000 million quota reductions (flat rates for the self-employed or other bonuses for the special Agrarian and Household Employees regimes); another 3 billion in childcare and birth benefits; 1,000 million more from the maternity supplement; 800 million to cover gaps in listing; or the 4,000 million administrative expenses for managing the system.

In this way, when these improper expenses are excluded, he finds that Social Security “is in a de facto situation of budgetary balance,” insisted Escrivá, who added that “this bad accounting has devastating effects on the perception of the sustainability of the system. and it is the greatest source of uncertainty “among workers and pensioners.

However, the minister, although he has said that this transfer of expenses to the State will have to have a budgetary reflection, has not specified what the rate of the transfer will be, beyond “giving a signal” already in the General State Budgets of 2021 and , of course, complete the elimination of this imbalance throughout the legislature. At this point, he asked for “help” to the deputies of the Toledo Pact to reach an agreement recommending this transfer of expenses to the State and thus, to be able to give it a budget reflection “as soon as possible.”

In short, Escrivá’s plan to clean up Social Security and strengthen its future financial viability is that in 2023, improper expenses (23,000 million) are already transferred to the Treasury and the pandemic is over. Thus, with the accounts in balance, it will face the retirements of the baby boom with one main lever: encouraging voluntary delay in retirement.