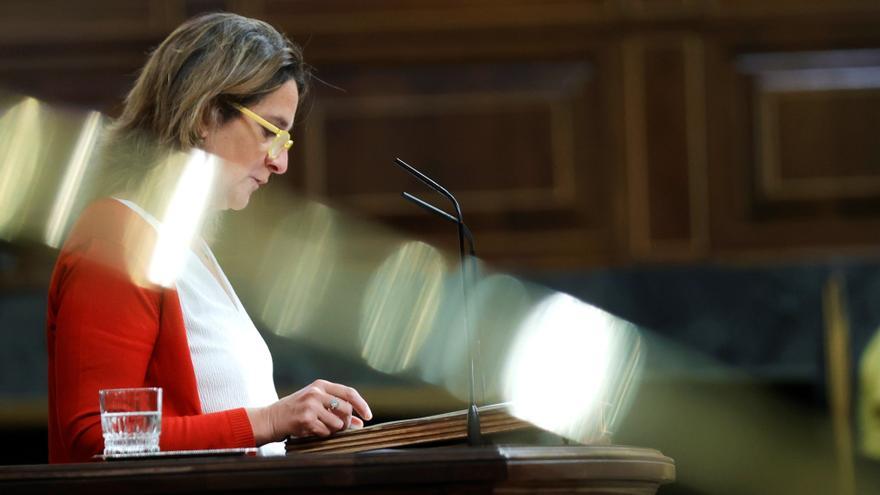 The Government plans to freeze the increases in electricity for consumers benefiting from the social bonus given the incessant escalation of the wholesale electricity market. This additional coverage will be provided by “the energy trading companies and, where appropriate, the State,” according to the third vice president and minister for the Ecological Transition, Teresa Ribera.

This is the main measure aimed at protecting the vulnerable that will be included in a next additional package of measures whose approval Ribera advanced this Thursday. With this package, the cut to electricity companies approved in September, which the Government is going to “clarify”, will be qualified, as promised on Wednesday in Congress by the president, Pedro Sánchez, given the warnings of the PNV, preferred partner of the Government.

That cut that the Executive is going to clarify is included in a Royal Decree-Law that Congress will validate this Thursday. The third vice president has been open not to apply it in the case of contracts that supply electricity to the industry at “reasonable prices.”

In addition to these measures to contain the energy cost of the industry in the face of the threat of factory stoppages due to the incessant rise in prices, the other leg of this new regulatory package will be to reinforce the protection of the vulnerable who have been granted the social bonus by freezing their rates .

To access these discounts, of a minimum of 25%, these consumers must contract the voluntary small consumer price (PVPC), the regulated rate in which the cost of energy is directly indexed to that of the pool, which has been skyrocketing for months. the exponential rise of gas.

This Friday the average daily price of the electricity auction will exceed 231 euros per megawatt hour (MWh), the second highest in history. And these customers, despite the drastic reduction in charges (the regulated part of the bill set by the ministry) and the tax cuts that the Government has already approved, continue to be exposed to increases in the wholesale market for the energy they consume.

“Probably what we will do is take measures to ensure greater coverage of this cost of energy by energy trading companies and, where appropriate, the State,” Vice President Ribera explained this Thursday in the corridors of Congress.

Currently, the social bond is financed by all electricity marketers. This Thursday the Court of Justice of the EU ruled that the system that was in force between 2014 and 2016, which charged its cost exclusively to the large companies in the sector, it is discriminatory.

According to the Ecological Transition, “it is a ruling that resolves a prejudicial question regarding the framework that regulated the social bond between 2014 and 2016. A regulatory framework that was repealed and replaced by the one that is in force today. Therefore, it does not affect the system in force for the protection of the most vulnerable. The CJEU does not question the existence of a protection system with contributions from companies “.

The objective of this reinforcement of the social bonus, according to the minister, is that the families that have it “do not pay more” and that the escalation of the pool “does not affect them”, so that the prices “remain fixed” and “do not have an increment. ” Ecological Transition trusts that this “kind of price freeze” or “total price guarantee”, in Ribera’s expression, is in effect before winter. “This month of October is key,” explained the vice president.

This freezing of the social bonus would be added to the figure of the vital minimum supply for vulnerable consumers included in the decree law validated this Thursday, which also establishes a cap on the increases of consumers benefiting from the last resort rate (TUR) of gas natural.

The vulnerable who are eligible for the electricity social bonus are in turn granted the thermal social bonus for heating, hot water or cooking, which is financed by the State and whose endowment is going to skyrocket next year by 44%, according to the draft Budgets for 2022. The bill to discount to hydroelectric and nuclear power plants the extra income they receive from the rise in CO2 also foresees to allocate to the most disadvantaged vulnerable consumers (those considered at risk of social exclusion) 10% of the proceeds.

What in principle is not on the table among those measures to reinforce the social bonus, according to ministry sources, is that the discounts of the electricity social bonus are granted automatically.

The latter is one of the claims that have requested consumer associations in the round of meetings that Ribera began in order to validate the decree, and after opening a public consultation to reduce the volatility of the PVPC through some reference to the future, a proposal that some consumer associations reject because they believe that it will entail a higher risk premium for users.

These automatic discounts, which are applied in countries such as Portugal or France, were included in the Strategy against Energy Poverty 2019-2024 approved by the Government in April 2019. Currently they have the bonus 1.16 million domestic consumers, according to the latest data from the National Markets and Competition Commission (CNMC), corresponding to May. According to consumers, 70% of potential beneficiaries are left out.