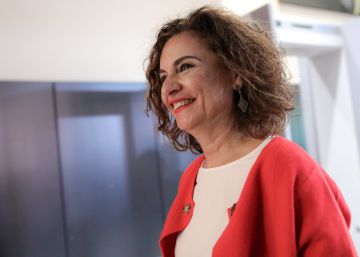 The Council of Ministers is preparing to approve on Tuesday the decrees with the new taxes, the Google rate and the Tobin rate, as EL PAÍS advanced this weekend. Government sources assure that, in all likelihood, the regulatory project with the two new tax figures will receive the approval of the Government on Tuesday and will begin the parliamentary journey to be able to approve them as soon as possible.

These taxes are two of the measures committed to Brussels to help clean up accounts and reduce the public deficit. They have been on the table of the Minister of Finance for more than a year. Even the former popular minister, Cristóbal Montoro, also tried to push them forward, but the political instability of recent months has delayed its processing.

The minister already anticipated it

The Minister of Finance and Government spokesperson, María Jesús Montero, he said last week in Congress that the new taxes on financial transactions and digital services, commonly known as Tobin rate Y Google rate “They are ready” and will be approved “in the next Councils” of Ministers. Asked in the halls of Congress about the processing of these bills that the Executive contemplates to approve, the head of the Treasury said that both laws have already completed their public hearing phase and “have passed the entire procedure”, as well as the new Law against tax fraud.

The tax on financial transactions and the Google rate These are the two fiscal developments that will generate the most revenue – in addition to the corporate tax rate review – they will contribute to public coffers, according to Executive estimates. According to the Budget Plan sent to Brussels last fall, the Tobin rate would provide an additional 850 million euros to the Treasury; the Google rate up to 1,200 million. Income that is made even more necessary given the forecast of economic slowdown expected for this year.

The Government of Pedro Sánchez has already presented these two taxes before the Cortes before being put on duty by the early call for elections, but both bills declined due to the dissolution of the Chambers.

The Google rate, as the tax on certain digital services, designed by Spain, will presumably have a 3% tax rate, which would be applied to digital companies with a worldwide turnover of more than 750 million and whose income in Spain is greater than three million euros. The decree presented last year, which declined by the electoral call, defined three taxable events in which the participation of users is decisive for the creation of value: advertising aimed at users of a digital interface (website, technology platform, software, or social network); the provision of platforms that allow users to locate other users to trade with them (the paradigmatic case is Amazon) and, finally, the sale or transfer of data collected from users of a website or platform.

The Left Coalition Executive also plans to give the green light to financial transaction tax. The Tobin rate is another widely debated tax in the international arena since 2013. Countries such as France, Italy or Belgium already have a similar figure. There is a working group within the European Union to harmonize this tax so that there is no fiscal competition between countries.

This tax will be levied with 0.2% the purchase and sale of shares of Spanish companies with a stock market value exceeding 1,000 million, provided that the wording of the initial project submitted one year ago and withdrawn after the electoral call is maintained. The person in charge of paying the treasury will be the financial intermediary that executes the purchase order. Unlike the previous tax, the collection obtained by this —Hacienda estimates that it will scratch about 850 million— will be used to finance pensions and Social Security benefits. The public and private debt and financial derivatives are outside the scope of this tax.

The Government also plans to approve the bill on Prevention Measures and Fight against Tax Fraud, which includes a large package of measures. Among the most outstanding initiatives of this new battery of measures against tax fraud, the limitation of payments of cash to 1,000 euros stands out. The measure will only affect professionals and not all taxpayers.

The list of debtors will also be reformed with the Tax Agency, popularly known as the list of defaulters, to include in the list the solidarity officers and lower the limit from which the treasury includes taxpayers in this relationship from one million to 600,000 Euros In addition, it is intended to legislate to prohibit tax amnesties and assume international standards against fraud. With all these measures, it plans to raise an extra 500 million.

The new taxes will meet tough opponents. The president of the United States, Donald Trump, has threatened community partners with new tariffs on cars if they continue with their plans to impose a digital tax. Everything, defends Washington, it has to go through the ongoing negotiations in the OECD, which is not expected to be concluded soon. With the same arguments, to different sectors, he has managed to turn France back on a tax that was already under way. Spain also plans to create its Google rate if the conversations to create a global tax do not bear fruit.

The Organization for Economic Development and Cooperation (OECD) He works on a tribute of these characteristics. According to the project he works with, the benefits that the approval of a public treasury would bring Google rate global would allow to raise about 100,000 million dollars per year (more than 92,000 million euros), equivalent to 4% of what states now obtain worldwide in corporate tax.

Specifically, the OECD is working on two major reforms of international taxation. The first pillar It supposes that the big corporations – not only technological ones, in a nod to the United States -, no matter what their fiscal domicile, they pay where their users are even if they do not have physical headquarters there. The second pillar contemplates the establishment of a minimum type of societies at a global level, to avoid diverting the benefits of large groups to territories with more advantageous tax rules and ensure that they pay taxes in all those countries where they operate. The ultimate goal, as the agency has clarified on more than one occasion, is to guarantee an equitable allocation of fiscal rights between states and prevent them from adopting unilateral solutions generating tensions, as has happened recently between France and the United States just about the Google rate approved by the Gallic country.

The analysis published last Thursday has been prepared through data from more than 200 jurisdictions and more than 27,000 multinationals. Their conclusions suggest that the first pillar would generate a slight improvement in revenue collection in most jurisdictions, especially those of low and medium income. More than half of these profits, the document notes, would come from 100 large corporate groups. The second pillar would allow to achieve more significant income, by reducing tax differentials between countries. The reforms, the agency adds, would also reduce the weight of corporate tax when choosing where to invest.

“Either you digitize or you disappear”