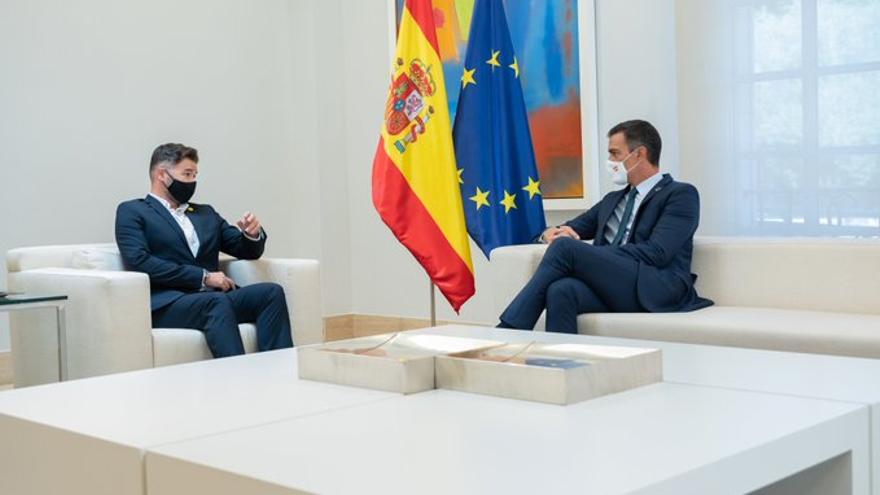 The Government balances to not close any door in the face of the General State Budgets for 2021. In Moncloa they have lived with some relief the turn that Inés Arrimadas has injected into Ciudadanos by becoming a possible unexpected ally to carry out public accounts and, after the last meeting with Pedro Sánchez, the socialist part of the Government gave its approval to the self-styled liberal formation given that it was the one that showed the greatest willingness to negotiate them. However, United We can made it clear that the path of the investiture allies must first be explored, which had also been the intention of the PSOE from the beginning. At the gates that negotiation truly begins, what Carmen Calvo will expand with a round of contacts with the set of parliamentary spokespersons, the coalition has recovered that discourse again.

“This Government, as a priority, has always opted to consolidate the majority of the investiture,” said the Minister of Finance, María Jesús Montero, who has not closed the door to “expand that base” adding Citizens. In that same direction, the Minister of Transport and Secretary of Organization of the PSOE, José Luis Ábalos, spoke on Monday: “It is always preferable to have those who trusted this government either actively or in a more condescending way.” However, both leaders acknowledge the “previous experiences” in the negotiation with ERC, which after weeks of negotiation ended up presenting an amendment to the entire 2019 budget project that led to the electoral advance of 28A. That is why the socialist part of the Government strives not to close the door to the Citizens road. “They know the discrepancies that the PSOE and the Government have with Citizens – Montero has responded -. Those differences have always existed, the new, unprecedented and important thing is that both formations are willing to talk and agree on Budgets, also with Citizens as well as with other political groups “. “I do not see any contradiction between what is a reality, the difference between two political forces and what the Government and Citizens want, which is to put the interests of the country above any partisan interest.”

Asked if she hopes to achieve a majority on the left and have ERC for the budgets, Montero has assured that she does. “We trust that the groups when they clearly express their possibility, their opportunity, to be able to sit down and talk about the budgets, we take note and we believe it,” said the minister, who considers that ERC spokesman Gabriel Rufián expressed it in a “forceful” way -. We have to start from trust beyond sticking to previous experiences that one was tempted to submit to a precise analysis grid “. “They have expressed their willingness to sit down and talk about the budgets and this Government has always opted as a priority to consolidate the majority of the investiture. We have always said that we would sit down to talk with the political groups of the investiture,. If it is not now when all of us have to vote on a budget, then when? “, Asked the minister, in favor of finding a” common denominator “for the accounts.

The Government has multiplied, in recent days, the winks to ERC in recent days. In addition to trying to reactivate the dialogue table with the Generalitat, which was his main requirement, in his face to face with Gabriel Rufián in the control session to the Government, Sánchez conveyed his will to carry out “progressive country budgets that reach a sufficiently broad agreement “, and marked distances with Arrimadas:” Citizens have already chosen, “he said in reference to his agreements with the PP in autonomies such as Andalusia, the Community of Madrid or Castilla y León. Clearly he has not stepped out of the Columbus photo. ”

“If you hold out, we hold out,” Rufián had previously said, who also warned United We Can that the PSOE’s approach to Arrimadas harms them in the long term: “Don’t you realize that this operation, to revive does one of the parties of the right go far beyond a budget? The operation is that the PSOE can choose in the next ten years between you or Citizens “.

While the socialist part of the Government avoids closing the door to Ciudadanos and insists on opening a negotiation with all political formations, including the PP, from United We can constantly reiterate the unfeasibility of adding Arrimadas to its budget project. The second vice president, Pablo Iglesias, assured that he had agreed with Sánchez to negotiate the accounts first with those who voted yes to his investiture, then with those who abstained and, finally, with those who rejected it. Although in Moncloa they did not take that order for granted, the Socialists do point, again, to the preference for the allies who facilitated the formation of the Government without ruling out any option. “The president has always been clear that we want these to be negotiated budgets and approved by a large majority,” they point out from the socialist leadership.

But the government partner does not see it feasible that Ciudadanos can enter that equation. The Secretary of State for Social Rights, Nacho Álvarez, who is the economic head that United We can have placed as an interlocutor for the budget negotiation, assured this Thursday that the budgets will be “strongly expansive” and will be far from the accounts “moderate and modest “claimed by Ciudadanos. In an interview on Radiocable, Álvarez assured that “what matters, the contents, but also who”. In his opinion, who determines the content in advance, so the drafting of the Budgets will depend on the partners that the Government has in mind, reports Europa Press.

Sources from United We can assure that another of the objectives of the Budgets should be “to distribute the costs of the crisis fairly”, which “requires starting the tax reform that Spain needs.” For this, the same sources point out, “a greater effort from those who can do it is necessary, capital income and large assets”, in line with “the path that the OECD sets out”.

“The country is facing a difficult economic situation. There is a drop in effective collection from the economic situation of families and companies. Our collection capacity is lower, we will have to set up budgets with some fiscal adjustments, but trying to make the capacity that we have right now shield public services, “said Montero.