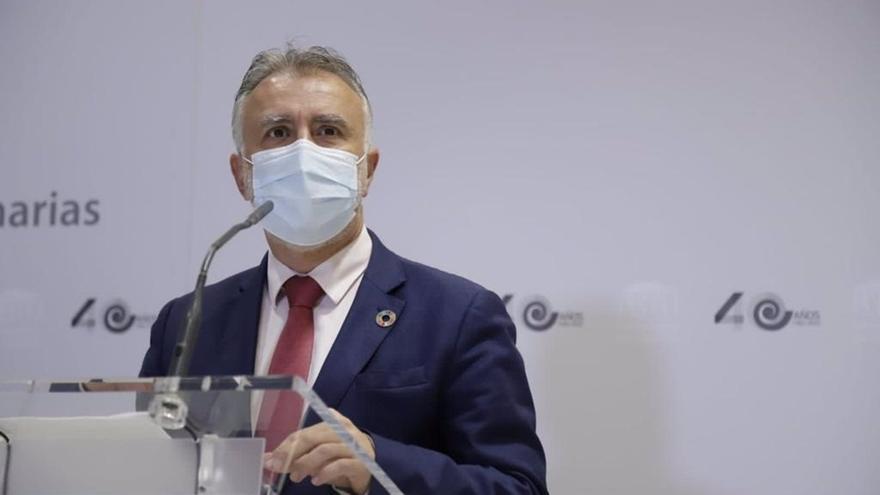 The Government of the Canary Islands has announced this Friday more restrictive measures for Tenerife. The president of the regional Executive, Ángel Víctor Torres, explained that the epidemiological situation on the island has made it "high risk" according to state criteria. With the arrival of December, the curve has "worsened". For this reason, the regional Executive will implement a curfew on the island starting this Saturday between 11:00 p.m. and 6:00 a.m. for a week.

In addition, during the next two weeks the capacity for group activities is reduced to four people. This rule affects social and family gatherings and beaches. In restaurants, it cannot be consumed in bars. Likewise, all non-professional sports activities are suspended in Tenerife. As for the gyms, they will remain open but their capacity will be reduced to 15 people.

These decisions have been taken during the celebration of an Extraordinary Council that took place this Friday with the aim of addressing the epidemiological situation in Tenerife. This meeting takes place after the Ordinary Council of this Thursday in which they were finalized the specific measures of the Archipelago for Christmas.

Torres recalled that the risk meters derived from COVID (occupied ICU beds and accumulated incidence) place Tenerife at high risk. The accumulated incidence of the island (number of positive cases accumulated in the last seven or 14 days) reached the highest peak of the pandemic this Friday, with 145.4, according to data published by the Health Council of the Canary Islands Executive. Similarly, the occupancy of beds in the Intensive Care Units (ICU) of the island's hospitals stands at 15.5%.

Along these lines, Tenerife registered during November the highest growth of the virus with 2,530 infections in 30 days.

The Executive discards the perimeter film in Tenerife

On the other hand, the Government has not considered perimeter measures between municipalities in Tenerife, nor measures of this type with respect to the rest of the Archipelago. Meanwhile, it continues to bet on the use of traffic lights. "A mechanism that served us, without any doubt, to stop the advance of the virus," Torres said.

In this sense, he alluded to civic responsibility and the civic character and common sense of the people of Tenerife. "Cheating is not valid to stop the advance of COVID-19," he said. Christmas is "a perfect breeding ground for the spread of COVID."

The Government of Spain and the Government of the Canary Islands have two different decrees in force regarding PCR tests or antigen tests for international travelers. At this point, the regional president stated that "we are not in conflict with the national Executive regarding antigen testing, we simply have two different scientific positions." In this way, Torres affirms that the Canary Islands is "the only autonomous community that has had a decree for more than a month that makes tourists have to arrive at the Archipelago with an antigen test. Evidence and experience show that they work well" Torres stated.

The Government of Torres will enable spaces in the main cities of the country so that Canarian residents, before returning to the Archipelago, can attend the PCR test paid for by the Autonomous Community.