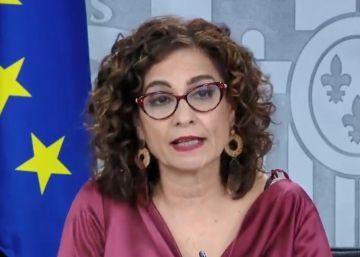 The Council of Ministers has given the green light this Tuesday, as planned, to the tax on financial transactions, known as Tobin rate, and the lien on certain digital services, the Google rate. The Minister of Finance, María Jesús Montero, has justified the new taxes on the need to “modernize and adapt the Spanish tax system, anchored in the twentieth century, to the new economic realities of the twenty-first century.” With both tax figures, the Government expects to raise 1.8 billion euros a year, 968 of them with the digital tax. The forecast of collection of the Google rate has been thus reduced from the 1.2 billion that the Executive expected last year, due to the economic slowdown and in light of the impact of similar measures in other countries, explained the minister, who added: “Spain cannot afford to have a tax system anchored to the last century.”

The Government continues with the implementation of a national digital tax without waiting for the Google rate global in which the OECD has been working for months and plans to have on the table at the end of the year. What Montero has confirmed, as economic Vice President Nadia Calviño said on Monday, is that exceptionally this year the assessment of the tax will not be done on a quarterly basis, but will be unique and “it will not be held until at least December 20 “. “Thus there will be scope for there to be an international agreement on this tax in the negotiations that take place in the OECD and the G-20 and allow companies more time to adapt,” Montero explained.

These negotiations at the international level are also part of the United States, the headquarters of large technology companies such as Google, Apple or Amazon, which has threatened tariffs on countries that pass taxes of this type alone that affect their technology. Washington has even challenged the EU with 25% levies on its cars if it goes ahead with the design of a community digital tax, which is currently frozen after negotiations fail.

Postponing the collection of the fee, Spain is aligned in a certain way to France, which has already approved the tax and even came to collect it. But given Washington’s threats to impose 100% tariffs on French products, it decided last January to delay charges until December. Montero has defended on Tuesday that “Spain will be advanced” in this area, but has clarified that “it will adapt its internal legislation when an international tax is approved” if it has “some nuance” that does not include the Spanish norm. “We will give priority to global legislation,” he said.

The tax “is not discriminatory based on nationality or type of company,” said Montero, who has not been worried about possible reprisals that the United States can take before ensuring that relations between the two countries are fluid. “We will continue being attentive but our task is to have a fair taxation for citizens,” the minister concluded.

“The financial sector received support during the crisis”

Montero has confirmed that the two tax figures, which cannot be approved via Budgets because they are newly created, begin today their parliamentary path, whose purpose has not been specified. Both taxes, however, will foreseeably take a few months to take effect. The Minister of Finance and government spokesman recalled that both assessments were already provided for in the previous legislature and that the bills on which they were governed fell due to the early call for elections on April 28.

As for the first of these, the tax on financial transactions, in addition to justifying it with the modernization of the tax system, Montero recalled that “the financial sector received support during the crisis from public administrations,” referring to financial bailout granted by the EU for the old savings banks. He has specified that it will be an indirect tax that will be levied on the acquisition of shares of companies with a market capitalization of more than 1,000 million euros, which will be paid “by the intermediary that executes the purchase order” and will collect about 850 million annually, online with the previous forecasts.

As for the call Google rate, which will tax the activities of large technology companies – “regardless of their origin,” he said, referring to the malaise of the United States for taxing its companies – Montero said that a 3% tax will be applied to revenues for the provision of advertising services, to the intermediation of services on line and to the sale of data provided by the user in the framework of a provision of services. The Government expects to raise 968 million euros a year with this tax, somewhat less than initially planned. “We have reduced the revenue forecast due to the economic slowdown and the data that are coming from other countries where it has already been approved,” Montero said.