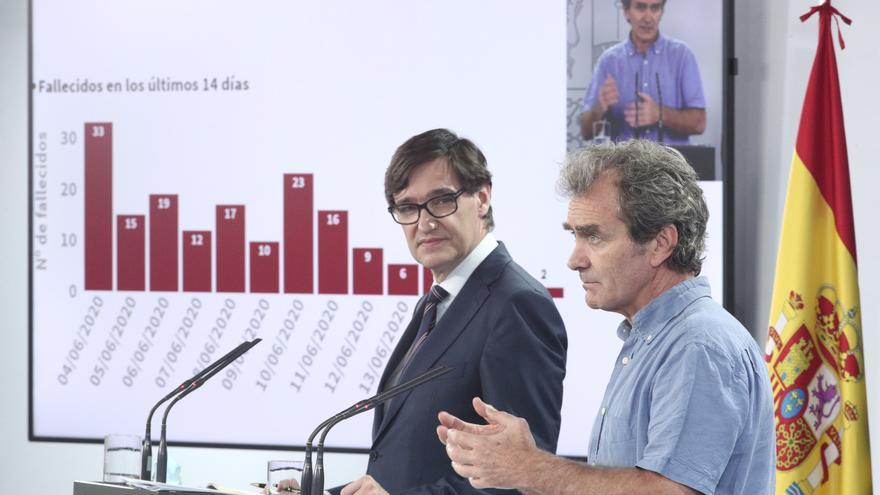 The Government does not consider for the moment modifying the current legislation to better tie the situations that require confinement due to the outbreaks of COVID-19. This has been confirmed by sources from the Ministry of Health to elDiario.es, despite the fact that it would be a way to avoid situations such as that of Lleida, where a judge has annulled the confinement of the population that the Generalitat approved on Sunday to stop the community transmission in the province. The Government considers that there are legal “mechanisms” for the communities, with competences in health, to face this circumstance, and that until now they have only encountered problems on this occasion.

Other government sources agree that at the moment it is ruled out to reform health regulations and that the way is to bet on these “legal mechanisms”. They are detailed in the ‘Early response plan in a scenario of control of the pandemic by COVID-19’, whose draft has been presented by Minister Salvador Illa this Monday to President Pedro Sánchez and the regional councilors. For their part, public health experts agree that reforming the regulations so that they unequivocally cover mobility restrictions would be a way to avoid legal uncertainty and allow a quick and effective reaction to the outbreaks, as reported by Fernando Simón this Monday, amount to 120 assets across the country.

In urgent or emergency situations, such as uncontrolled transmission of coronaviruses, communities can take refuge in the Organic Law on Special Measures in Public Health (1986), in the General Health Law (1986) and in the General Health Law Public (2011). It is the first of them that enables regional administrations to “adopt the appropriate measures for the control of the sick, people who are or have been in contact with them and the immediate environment, as well as those considered necessary in the event of a transmissible risk “. The application of the three laws must be ratified by the Administrative Litigation Courts, and that is why, on this first occasion, the Lleida guard judge has overturned the decision of the Govern. He considers that the power to tighten confinement is from the central government via a state of alarm and that the 1986 rule “is very ambiguous.”

The magistrate also argues that the reports provided by the Government of Catalonia do not indicate “why it is important, if the importance is extreme and serious, or based on what data the existence of this dangerous community transmission can be determined, in short , there is no motivation in data or in fundamentals “. The decision has thus left in the air the measure of restricting the mobility of the population at a time of maximum concern about the number of infections registered. And for this reason, despite the fact that the annulment of the order can be appealed, the President of the Generalitat, Quim Torra, has declared that he does not accept it and that will approve a law decree to shield it. An alternative that, according to government sources, is not the ideal way to limit fundamental rights.

Health sources also consider that this political-legal swing has only happened this time. On other occasions, as happened in February in Igualada, the current regulatory framework has been sufficient. However, before the so-called ‘new normality’, the Government did raise the possibility of legislative reform. On May 10, still in alarm and with the population confinedSánchez informed the regional presidents that his intention was to develop “when we have controlled the epidemic, a formula of governance that will imply the modification of laws (public health or health)Also around that time, Vice President Carmen Calvo pointed it out in the Senate. But at the moment it is not on the table, and for the Executive, the option in the Catalan case is for Torra to appeal to the Superior Court of Justice of Catalonia for the decision. , since it is based on a question of interpretation.

The latter coincides with the president of the Transparency Council of Navarra and former president of the Association of Health Jurists, Juan Luis Beltrán, and therein lies, in his opinion, the problem. Based on a “more generous interpretation” of the rule, “other judges could have ratified the order under the protection of health legislation”, which implies that there is “legal insecurity” because “the judges are not sure what they have to dictate and we can find ourselves with situations in which a judge from Albacete is saying yes and another from another province that is not, “he exemplifies.

For this reason, Beltrán bets either to reform the law, or, somewhat easier, to elaborate a new rule of Special Measures in the Field of Public Health so that it is allowed to dictate the restriction of mobility and make decisions in extraordinary situations “with security ” In both cases the process is slow, despite the fact that they can be processed urgently, since they are organic laws that require a strong consensus in Congress, since they have to be approved by an absolute majority. Even so, in the opinion of the expert, this possibility is “the most convenient” to “update and fill the gaps in the current legislation, which is insufficient” for cases derived from epidemics such as that of the coronavirus. In Beltrán’s opinion, the route of the decree that Torra has chosen does not correspond to him either: “He has no authority to confine by decree.”

This same idea is transferred by Daniel López-Acuña, former director of Health Action in Crisis Situations at the WHO and professor at the Andalusian School of Public Health, for whom the current regulations leave “some legal holes” that “do not leave tied the way of to make confinement viable, which on the other hand has proven so extremely useful in these cases. ” For the expert, modifying the law of 86 “is a necessity in health matters”, but “it is something that is not going to be done overnight because more or less long processes are required, so I think it will be a more medium-term option. ”

However, he also considers that the possibility of hardening the confinements must be “cut and refined in some way” because “the virus is still with us and what we are seeing with Catalonia can happen perfectly elsewhere.” In his opinion, the option is to establish a collaboration mechanism between the autonomous communities and the central government such as the one that was presented this Monday, and it should be approved by the Inter-territorial Health Council next Thursday, but in practice it is committed to facilitating that, if the case arises, the state of alarm is decreed in specific territories. An option that Health considers “as a last resort” and in no case in isolation, but throughout Spain (although with different territorial applications).

“I believe that the law as it is proposed today allows it, so in the short term it seems to me the most convenient. But I believe that it is not an all-or-nothing issue, but that it can, for example, be enacted on such a site and that the delegated authority is the president of the autonomous community, for example. Close collaboration between the central government and the autonomous regions is essential, but we must have a mechanism because we are talking about the public health of an entire country, “ditch López-Acuña.