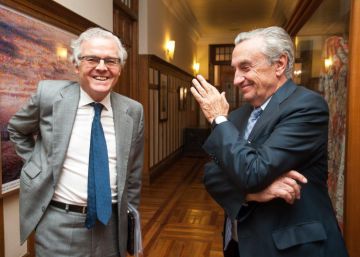 The Coalition Government, taking cruising speed, must address some appointments. Namely: the presidencies of the State Society of Industrial Participations (SEPI) and Red Eléctrica de España (REE), in which the former has a 20% stake, the National Commission for Markets and Competition (CNMC), the Independent Authority for Fiscal Responsibility (Airef) and the Economic and Social Council (CES). But it doesn’t show much hurry.

Oscar Fanjul releases ballast in Omega Capital. Callado had Oscar Fanjul who last year, when he turned 70, decided to release ballast and leave executive functions as CEO to Gabriel Fernández de Bobadilla in Omega Capital, the investment firm of Alicia Koplowitz. Fanjul, who joined the company after successively chairing Repsol, Hidrocantábrico, NH and Deoleo, maintains its link to the group. He is also one of the most international Spanish advisers (he has been in Unilever, London Stock Exchange, Goldman Sachs and now he is still in Lafarge, Marsh & McLennan and Spanish Ferrovial).

Sacyr exploits the success of handball. The construction company Sacyr does not want to lose space in the Spanish handball after the last success of the selection (European champion and classification for the Olympic Games), which she sponsors. The firm chaired by Manuel Manrique, for this reason, has just signed an agreement that increases its commitment to this sport and becomes a sponsor of the Asobal League, which is now called the Sacyr Asobal League. The agreement includes the use of the Sacyr denomination in all competitions and its presence in advertising media and promotions.

Gamesa’s minorities want the same price as Iberdrola. Siemens settled the battle with Iberdrola in Gamesa after several episodes of tone increased by the two parties at a good price (reported capital gains close to 500 million to the electricity company), but it has been found that the minority shareholders of the firm of wind turbines also want to benefit from the agreement and be able to sell their shares at the same 20 euros per title paid to Iberdrola. Now Siemens will have 67% and nothing forces it to increase its participation; but…

The most immediate seem to be those of the SEPI, dependent on the Treasury, which has been chaired since October on an interim basis Bartolomé Lora after the resignation of Vicente Fernandez, investigated in the cause of the Aznalcóllar mine and for his alleged interference as general director of Industry of the Junta de Andalucía, and REE, in which he recently gave the asonada Jordi Seville. In the SEPI several names have been considered, including the possibility of recovering Fernández if he is exempted from the trial. The appointment, in any case, must be approved by the Council of Ministers. Meanwhile, in REE it is the board of the company that elects the president from among its members, usually at the proposal of its main shareholder, SEPI.

However, in that process the President of the Government wants to participate actively, Pedro Sanchez, which will take into account the opinion of the fourth vice president and minister for the Ecological Transition, Teresa Ribera, which at the time recommended Seville, with which in the end it was not understood. But, according to presidential sources, it is not urgent. “You can expect because the plans are consolidated and there is confidence in the direction of the CEO” while the person is clarified to occupy the presidency without rushing.

The renewal of the CNMC is more tricky, in which the president ended his term last September, José María Marín, as well as the vice president, Maria Fernandez, and three vowels (Clotilde de la Higuera, Benigno Valdés Y Josep María Guinart). That is, half of the 10 full members of the council, who were appointed after its creation in September 2013 by the Government of Mariano Rajoy.

The CNMC was the result of the merger of several commissions (mainly the Competition, Energy and Telecommunications Commission) with the opposition of the leftist groups, which refused to propose candidates, so it was formed similar to the PP , in addition to a representative of the PNV (Idoia Zenarruzabeitia) and the former CiU (Guinart).

During the Acting Government the relief could not be addressed, since it needs the endorsement of the Congress of Deputies; but now, that the groups seem willing to enter the game, the incorporation of the substitutes is very disputed. It is also discussed whether it is done in block or by parts. In short, the permanence of the current equipment can be extended sine die. On the other hand, the relay has reopened the debate about the necessary independence of the members of the institution.

The CNMC was the result of the merger of several commissions (mainly the Competition, Energy and Telecommunications Commission) with the opposition of the leftist groups, which refused to propose candidates, so it was formed similar to the PP , in addition to a representative of the PNV (Idoia Zenarruzabeitia) and the old CiU (Guinart). Now it seems that political groups are in the job of entering the game. However, the relief has again raised the debate about the necessary independence of the members of the institution. Two years ago, still with the PP in the Government, a return to the old model was raised. However, the long political instability, coupled with the fact that the current model has worked has delayed any decision.

The most striking case, however, is that of CES, whose renewal is pending since 2015, when Marcos Peña served his second term. He remained four years of extension until in April 2019 he left the position he now occupies Mari Carmen Barrera, secretary of Social Policies, Employment and Social Security of UGT, froma interim. The consultative body on social and labor matters is attached to the Ministry of Labor, where it now mandates Yolanda Diaz, representative of United We Can.

So far, there have been no signs of change, but the sources consulted underline that it is the opportunity to give a boost to the body, which in his opinion is numb. The possibility of adopting a rotating presidency is considered, so that every two years it is chaired by one of the three blocks that make up the plenary (trade unions, employers and social experts). For the appointment, the candidate must be proposed by the Government, have the approval of two thirds and go through the Congress.

Another issue is that of Airef, whose previous president, José Luis Escrivá, left the position to assume the Social Security portfolio. In any case, his term ended this February. The Government must now decide whether to confirm Cristina Herrero, which is interim and has the support of its predecessor.

It is also debated whether the new Office of Banking Consumer Supervision is located in Economy or Consumption.

Another agency that meets the deadline this year, although it will be in October, is the National Securities Market Commission (CNMV), where Sebastián Albella (pictured with José María Marín last June in Santander) will have reached the front four years without conflicts politicians and samples of independence that in principle prevent him from being renewed another four. Where they can be, it is in the coverage of the advisor position of the Bank of Spain that has become vacant after the departure of Rafael Castejón, proposed by the PP.