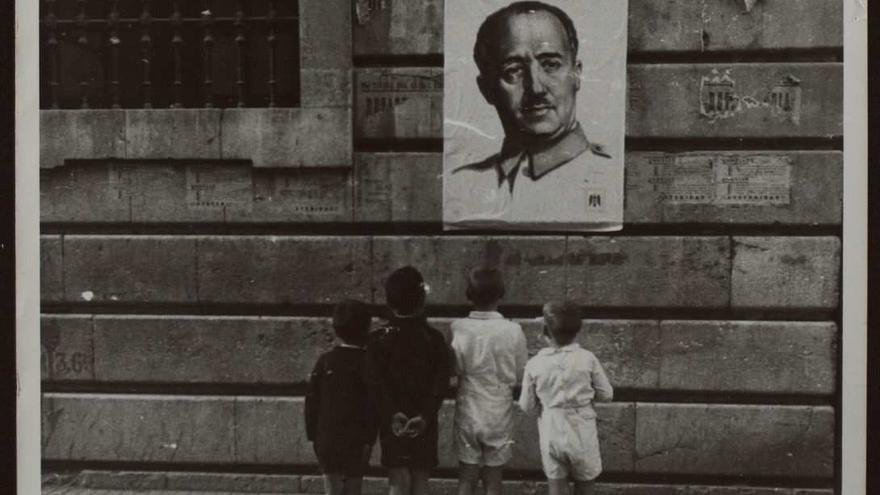 Enrique Díez always tells two defining moments for him when it comes to the teaching of historical memory (now called democratic) in Spain. The first, which made him throw himself completely into the subject, explains this professor from the Faculty of Education of the University of León, happened when he was collaborating in the filming of the documentary The Fields of Silence and he went to a class at the Fabero institute, north of Ponferrada, in León, to explain that there had been a concentration camp of the dictatorship. “No one knew it, and many had had grandparents working as slaves there,” he recalls, astonished.

The second moment when he took his 1st grade college class to see the award-winning documentary The silence of the others, also about the dictatorship and the families’ struggle to recover their loved ones buried in graves, and the majority response of the student body, who had already gone through all compulsory education, was: “No one had explained any of this to us.” Díez, specialized in education in historical memory, summarizes with these two anecdotes the state of affairs in Spain, which he studied in the report Democratic memory at school.

The Government has proposed to change this reality through the Memory Law, whose project has been approved this Tuesday by the Council of Ministers. The law includes its intentions in article 45, on measures in educational matters and teacher training, which in point 1 says that “the Spanish educational system will include among its purposes the knowledge of the history and of the Spanish democratic memory and the fight for democratic values ​​and freedoms “, for which it stipulates a change of curricula for ESO and Baccalaureate. The moment to do it is ideal: The Ministry of Education is exactly immersed in a change of the curriculum at the state level that should facilitate this work.

Point 2 complements the first and establishes that “the educational administrations will adopt the necessary measures so that training, scientific, didactic and pedagogical updating in relation to the school treatment of democratic memory are included in the initial and permanent training plans for teachers” .

Ministry sources indicate that the intention is not limited to modifying the curriculum of the subject of History. The idea, they explain, is that it be a more transversal training that goes into Ethics, for example, and perhaps other subjects. These sources acknowledge that a problem is that these issues of the Civil War and the Franco regime are far behind in the resumes and that, due to the vastness of these, many times the agenda is not completed and this part of the history of Spain is left out, a problem that must be solved. The sources do not go into details because the work is in progress, but they insist on the idea of ​​reordering the times and the contents of the subject (s).

Diez is skeptical of the impact the law will have. “It could well happen that the same thing happens in the communities,” he explains. Several autonomies have their own memory law, which was also committed to including these teachings in school. They never got off paper, according to an analysis he did. “Many have not gone beyond the mere declaration of intentions and in others where something was put into motion, the arrival of the far right, such as Vox, has cut them off.”

This happened in Andalusia, which approved theirs in 2017. “The only thing that has been effectively reflected in this initiative are support didactic materials, so that those teachers who have greater sensitivity or willingness to introduce these topics, can introduce them, voluntarily.” In Aragon, the response to Vox has been greater support for the memory law, but article 28, which talks about the educational field, is still waiting. Something similar has happened in Asturias, with its 2019 law, Euskadi, the Valencian Community or Castilla y León. All of them produced their own regulations, all or most alluded to including these teachings in the curriculum, none have done so with impact, summarizes Díez.

This specialist is surprised that the Secretary of State for Democratic Memory amended the Lomloe to end up putting such a “vague” additional provision. “They are generic and interpretable terms that do not specify anything”, he is surprised, “but then they do mention the Jewish holocaust. And the Spanish?”

The current problem, which this law tries to solve, is that now in schools and institutes nothing is taught about historical memory, or it is done in an aseptic way, explains Díez. Socrates Quintanar Díaz, a history professor at a Madrid center, confirms this. “Since Education for Citizenship died [la asignatura que creó Zapatero y eliminó la Lomce de Wert] It has been very difficult to get anything into class, “he explains.” As soon as you miss the slightest line, you can receive a warning from a family, “he adds, although he admits that the situation is particularly tense in his municipality, a small fiefdom of the right in Madrid In the best of cases, maintains this professor, it is at the mercy of the good will of the teaching staff.

Diez explains it in his study on democratic memory and education. The students face “the comparison between coup plotters and democrats” with expressions such as “on both sides they caused the same victims.” Or that the war was “a conflict between brothers produced by the chaos of the Second Republic”, collected in his report. “If a single student finishes compulsory education without knowing this, it is a tragedy of the XXI century, we are doing something very wrong. It must be borne in mind that for most people, school is the only time in their lives in which they have contact with academic history, “he reflects.

The Cives Foundation agrees that there are “latent deficiencies” in the subject of History and the treatment of the Civil War, repression and Francoism. “They are at the end of the syllabi and sometimes they are not discussed because there is no time during the school year,” they write. And they add: “During 40 years of democratic regime there has not been a treatment of memory in our country. A void has been created that has been filled by a treatment of democratic memory from equidistance and neutrality, still persisting elements of the Franco’s memory “.

They propose from Cives “to put an end to equidistance” that equates democracy with a dictatorial regime, and for this they demand a Historical Memory in the school “that can be shared by all citizens and that is not a matter of parties or confession religious, nationality, or regional. That is, a democratic memory that cannot be rejected by any democrat, be it conservative, center or progressive, without betraying the values ​​of the democratic regime that it defends “, and they underline the need for transcends the subject of History to also imbricate in civic and ethical values ​​or philosophy and be treated as a cross-cutting issue, as seems to be the intention of the Government.

The professors consulted are skeptical about the path that this measure may take. Díez alludes to what happened in the autonomous communities and alludes to the difficulty of creating such delicate content. The teacher explains the process that took place in Castilla y León when the law was approved and they tried to put content into the curriculum. “A commission was made where the associations for the Recovery of Historical Memory and a representative from each public university in Castilla y León were represented, coordinated by the Councilor. There were meetings, the issue was debated. The associations and university professors said that There were units for the recovery of historical memory made from the University, with the collaboration of the departments of Didactics (the educational part) and History (the content). It was enough to send this material to the educational centers. The counselor said no, that they wanted to control it and that they would entrust it to the Ministry of Education. The associations and experts said they did not agree and in the end it all came to nothing. “

Professor Quintanar introduces the subject of textbook publishers, which in the end have the power to decide what they put and how in their books, which largely mark what is done in class. “They are not interested in antagonizing anyone. Vicens Vives, who happens to be a bit more on the left, dedicates a page to the matter on his agenda. They tend to focus more on the economic recovery of Spain at that time,” he illustrates . The surveillance on the teaching staff (“academic freedom died with the videoconference classes and the possibility that they record everything you say and get you in trouble”) also makes, he assures, that many self-censor.

In any case, the process is in a very incipient phase and at the moment it generates more questions than it returns answers. A certainty the Government can have: If the PP takes power, it will repeal all the laws of memory, as Pablo Casado has assured.

Socrates Quintanar Díaz points out this fact, resigned, and closes: “In any case, the law of memory is done day by day. But in the streets there is fear, and in the classrooms, panic.”