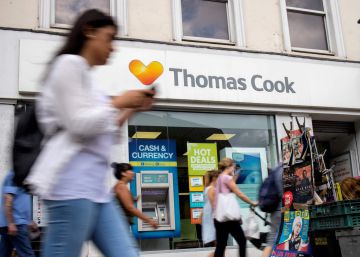 The Government has raised the money it will make available to the tourism sector to 800 million to mitigate the consequences of the Bankruptcy of British tour operator Thomas Cook. To the 300 million crash plan announced a few days ago by the Minister of Industry, Commerce and Tourism, Reyes Maroto, of which 200 million consisted of credit lines, this Friday’s council of ministers added another 500 million to strengthen the competitiveness of the sector with digitalization and modernization of services projects.

In the press conference after the council, the acting Vice President of the Government, Carmen Calvo, has detailed the measures of the crash plan announced several days ago, which she described as a “reasonable response to a crisis that has come to dampen in terms of employment and economic activity the situation a sector as important as tourism ". Thus, he explained that there will be credit lines from the Official Credit Institute (ICO) for 200 million euros" for financial aid to companies that have been involved "in the Thomas Cook bankruptcy: Up to 500 million more will be added to these lines, under the State Financial Fund for Tourism Competitiveness (FOCIT), to support the development of projects aimed at adapting and improving competitiveness, especially those that contain actions of digitalization, innovation and modernization of services The ICO will also administer these credits.

Calvo has also explained that the Government will give direct subsidies of 15 million euros to the Canary Islands and 8 to the Balearic Islands to "share the efforts" that these communities will make to mitigate the effects of the fall of the tour operator, which carried millions of tourists each year to the archipelagos.

The decree also includes, as Maroto announced at the time, reductions in air fares to encourage companies to increase their flights to the Canary Islands and the Balearic Islands, mitigating the loss of air connectivity that Thoms Cook's aircraft stops. In this sense, Calvo has celebrated that “the market itself is filling the gap” left by the British tour operator and the Government is harvesting “good data” in this regard after announcing that the decree would include airport tax reductions.

Bonuses of 50% are also approved for the discontinuous fixed contracts of workers in the tourism sector in the Canary and Balearic Islands in the months of October and December – currently only applied in November, January and March -, so that the companies affected maintain the highest Possible number of jobs. Single windows will be enabled in the Tax Agency and Social Security so that workers and companies are informed of the possibilities to defer contributions and taxes.

Finally, the Government will support, with the help of the Ministry of Justice, companies and freelancers to “plead for the interests that have been injured,” said the minister, referring to how to proceed in the bankruptcy process that will open for collect the debts of Thomas Cook. He has indicated that the employer CEOE will also help in this advice.

“Women must make ourselves heard in decarbonization, depopulation or the role of peripheral economies”