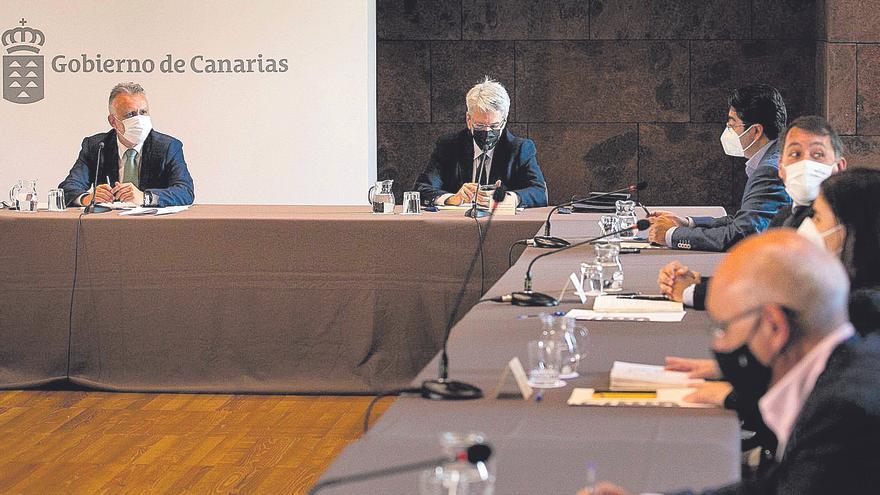 This was explained after the Security Board held at the headquarters of the Presidency of the Government in Santa Cruz de Tenerife, in which the Vice President of the Executive, Román Rodríguez; the Minister of Health, Blas Trujillo, and the Minister of Security, Julio Pérez; the Government delegate, Anselmo Pestana; the president of Fecam, María Concepción Brito; the mayor of the Tenerife capital, José Manuel Bermúdez, and that of La Laguna, Luis Yeray Gutiérrez, as well as commanders of the security forces. For now, it is not contemplated to request the central government to implement the state of alarm in the Autonomous Community, estimating that there is still room to correct the current negative trend without having to resort to such a drastic measure. However, they point out that, if the current plans do not give the expected results, they may claim that alternative.

For Torres, the aforementioned meeting and the tightening of the surveillance of public and private spaces are due to a “meteoric” growth of infections throughout Spain and also in the Canary Islands. He clarified that the accumulated incidence in the Archipelago during the last seven days is 72.06 cases per 100,000 inhabitants. In this area, the islands are below the national average, which stands at 82. Regarding the accumulated incidence in the last two weeks, Torres explained that in the Canary Islands it is 129 cases, while the state average stands at 134. It should be remembered that last Thursday it was learned that in the previous 24 hours there were 378 new infections in the region, the highest figure that has been recorded this year in a single day.

In any case, as is well known, this increase in covid patients is not the same on all the islands. The Canarian president made it clear that “we are concerned about Tenerife.” Faced with the message launched in the first weeks and months in which the existence of the pandemic was known, when the condition of covid-19 among the young population was downplayed, Torres offered data that refutes the aforementioned idea. From April 1 to June 29, in the Autonomous Community there have been 47 people under 39 years of age hospitalized after suffering a coronavirus infection and five of them had to be admitted to the Intensive Care Unit (ICU). In addition, three more people of that age group died in the Archipelago after becoming infected in the last two months. In any case, he admitted that the increase in citizens who have already completed their vaccination process has contributed to reducing hospitalizations and the risk of death in recent months.

No alternatives to tourism.

For the president of the Executive, “prevention measures must be taken to the extreme; There is nothing to celebrate”. He gave the example of a marathon, in which, after traveling most of the kilometers, “we can fall and not get up” when there are hundreds of meters to go to the finish line. Along these lines, he encouraged “not to throw away the effort made.” He admitted that, “if tourism is closed to us, the Canary Islands have no other economic alternatives”, so it makes no sense that, to enjoy it for two or three weeks, the tourism sector, on which it depends at least 65% of the population on the islands. He stressed that people who so wish may go to be screened at the facilities set up in the area of ​​La Cuesta (La Laguna), Barranco Grande (Santa Cruz de Tenerife) and Granadilla de Abona. In addition, citizens between the ages of 40 and 59 have the option of getting vaccinated without an appointment. He also pointed out that in the islands there are already people over 16 years of age who have an appointment to go to get the vaccine. According to Torres, “everything illegal has to be prosecuted.” And on that premise, he warned that the different security forces will intensify their efforts to control and avoid possible risky behaviors, as well as to guarantee compliance with the regulations. He also called for “unity of action” to the different public administrations to stop the current level of infections and thanked the contributions made in the Security Board.

Martín clarified that the processing of the sanctions can take months, but that does not mean that the fines are not collected by the administrations. In Torres’ opinion, this process should be done in the shortest possible time. Throughout the entire pandemic, around 60,000 complaints have been filed in the Archipelago for breaches of regulations to stop covid-19. In his opinion, it is still feasible that before August 70% of the vaccinated population could be reached. However, he clarified that other factors will also influence this forecast, such as the distribution of the pharmaceutical companies that produce vaccines or staff vacations. In fact, he admitted that the Archipelago was also affected by the supply problem of AstraZeneca’s product.

“They think they are immune.”

The president of the Tenerife Cabildo explained that “we are playing a lot”, both in the health and in the economic situation of the island, if the current rate of infections is not reversed. In his opinion, July is a “key month” to curb the negative trend and not harm the arrival of customers in the following weeks and months. For Martín, “young people believe they are immune and they are not”, so he demands caution from this segment of the population and the rest. He also encouraged citizens to carry out screenings in the three areas set up for this purpose, in order to better understand the progress of the disease, after other similar initiatives promoted in the recent past have not had the expected success due to lack of assistance.

“This is not the time for parties.”

The mayor of Santa Cruz de Tenerife, José Manuel Bermúdez, confirmed that from this weekend the controls and sanctions will be intensified for people who fail to comply with the measures established to prevent massive infections of the coronavirus. For the councilor, “it is not the time for parties, bottles or crowds”, but rather to “cooperate” to avoid massive infections. Bermúdez demanded “the youngest of them the maximum collaboration” to achieve this objective. He also asked this group of the population to help in the follow-up of the disease and that the young people say with whom they have been in contact to facilitate the tracking. He announced the closure of access to certain areas, such as the coastline of Añaza, Las Teresitas or Las Gaviotas, as well as skating areas (skate park) or calisthenics enclaves. But Bermúdez regretted that the most effective measures that most help the security forces in the fight against mass infections “no longer exist”: the curfew and the obligation to wear a mask.

The group with the most infections

The Canarian president pointed out that, by highlighting that young people also die of covid, it is not a way to demonize them, but it is the group in which more infections occur. Pedro Martín declared that Tenerife has been the place with the most reservations in all of Spain for the summer and now the work done in terms of promotion, especially in the Iberian Peninsula and the United Kingdom, “can come down.” This Sunday the Santiago Martín pavilion, in the municipality of La Laguna, will open 24 hours a day to carry out a mass vaccination. And the Hospital Nuestra Señora de La Candelaria will apply a new system for the detection of new strains and to know how are the mutations of the coronavirus.

In addition, yesterday the endorsement of the judge of the Administrative Contentious Court number 4 of Santa Cruz de Tenerife was announced, to the isolation of 104 users of the municipal shelter of the capital of Tenerife. This sanitary measure was taken by order of the Ministry of Health to stop an outbreak with 46 people with a confirmed positive. | LP / DLP