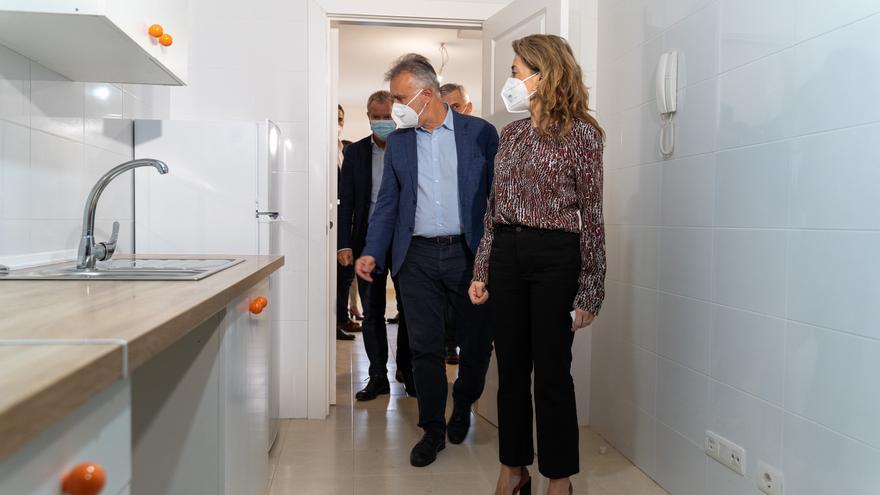 The Canary Islands Government takes a run and intends to deliver around a hundred homes, between those already built and the prefabricated that it is acquiring at a forced march, during this month to those affected by the volcano by Cumbre Vieja, who have become homeless and are residing in a hotel. Although he promised to start delivering them in October, the bureaucratic difficulties of the acquisition and the development of these homes have delayed the transfer, although the president of the Canarian Executive, Angel Victor Torres, yesterday stressed that it has delivery started -even in a dropper- 52 days after the eruption of the volcano, “compared to what is usually a process of years in the Canary Islands.”

For this reason, he remarked during the visit he made to 46 homes that are in the process of acquisition in Tazacorte by the public company Visocan of the Government of the Canary Islands, together with State funds, which is trying to give a response with “maximum speed to the families.” During the visit to this housing development, the Minister of Transport, Mobility and Urban Agenda was present, Raquel Sánchez; the president of the Cabildo de La Palma, Mariano Hernandez Zapata; and the Minister of Public Works, Transport and Housing of the regional Executive, Sebastian Franquis, among other charges.

These 46 homes are being refurbished and all the paperwork with the successful bidders is being completed, so they will be delivered at the end of the month or early December. The first transfer of the houses bought by the Government began on Monday, with five houses in Fuencaliente, which together with another 13 in Tazacorte that are about to be received by the affected residents, are part of the first batch of 18 properties acquired by the Executive of the 300 that he plans to give before the end of the year. They are new promotions that were unused and have had to be fixed.

Along with these 18 houses that the neighbors will be living in these days – they still have to buy furniture with checks purse provided by social services since the Government is in charge of equipping the kitchen- 46 are being finished in Tazacorte, which, added to 30 prefabricated facilities that are already on the island, are expected to be delivered this month, at the beginning of December, around to a hundred houses.

Next month another will be acquired. lot of 29 houses and the Canarian Housing Institute (Icavi) will give another group of 23 in the municipality of El Paso. The Ministry of Housing hopes to make available to those affected 123 houses bought and owned, and another 200 prefabricated wood. The latter will be installed on land donated by the municipalities, lands that were also visited yesterday by the President of the Canary Islands in the town of El Paso.

Although the houses are being given little by little – only 18 for now in a month and a half after the beginning of the volcano -, according to the president, it is “an evident sample of effectiveness in the administrative response, in the assessment, the human work and dedication seven days a week ».

Torres also underlines the effort made to open “in record time a direct care office to citizens in a property assigned by the Cabildo and authorized by the Government of the Canary Islands ”, a service that collects the petitions and documents of the victims, many of whom have lost their only home. Also, remember that a team was immediately formed with 15 social workers to attend to those affected by the volcano, who were later joined by another 12, and each case began to be analyzed and a protocol was signed with the three affected consistories and the Cabildo.

The president understands that it is “logical, understandable and objective the anguish and despair of the affected families”, but in turn emphasizes that the administrations have had a response that has allowed some of these people to enter a temporary house this week .

Regarding the land for the package of 200 prefabricated houses pending installation, the counselor Sebastián Franquis supervised yesterday together with Ángel Víctor Torres and the mayor of the El Paso City Hall, Sergio Rodríguez, the plot proposed by the council of more than 2,000 square meters for the installation of the first 30 modular houses in the municipality.

“We are studying a proposal to expand the plot and, from the moment that the land meets the conditions when paving the ground, we will immediately begin to install the modular homes,” said the counselor. The placement of these 30 houses can take around two weeks and the Ministry has endeavored to do so as quickly as possible since the land on which the council is already working is transferred to them.

The process to obtain land is being carried out with the different municipalities affected. The Ministry will acquire the prefabricated houses depending on whether the municipalities give them the land. The next meetings will be with the town councils of Los Llanos, to supervise a land proposal located in the Tennisca Mountain, and also with that of Tazacorte.

Along with this, the Cabildo de La Palma has made available to the Executive the area for the Insular Auditorium, located in Los Llanos de Aridane, so that they can install modular homes there. It is a plot owned by the island corporation, whose location is key as it is central and faces the Llano de Argual, which has an area of ​​7,646 square meters.

The modular houses are made of Nordic fir wood, with a surface area of ​​74 meters built square, and have three bedrooms, plus a kitchen, bathroom and toilet. Inside all of them are finished with thermal insulation and plasterboard, and a laminated parquet.

All these houses, the brick and the wooden ones, are to temporarily house those affected by the volcano for a period of three years until the construction process of their definitive houses is completed.