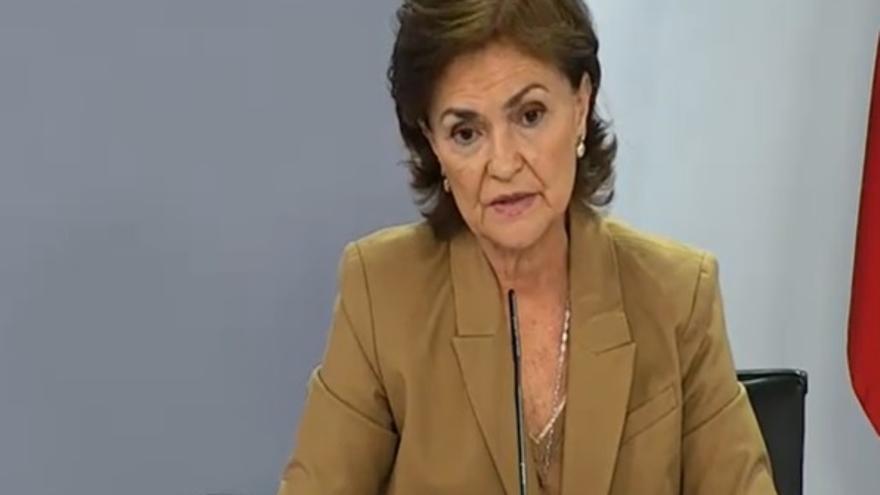 The COVID-19 pandemic broke out in Spain when the coalition government had barely a month and a half to live. The unprecedented bipartisan since the restoration of democracy in Spain had just approved its regulatory calendar for 2020 when the first coronavirus infections affected the Spanish population. The Executive’s forecast was then to approve a total of 92 laws throughout the year, but the pandemic has forced a reconsideration of priorities and has slowed down those legislative plans. The first vice president, Carmen Calvo, who is assigned the tasks of coordinating the cabinet, has reformulated that regulatory plan for the next four months and that will be inaugurated next Tuesday with the Democratic Memory law, with which the Executive intends to strengthen the regulations of historical memory imposing sanctions for non-compliance, ensuring that the State takes charge of the exhumations of victims or ending with traces of the disctation such as the Francisco Franco Foundation, which will have to be outlawed.

In total, the Government hopes to carry out 171 proposals until the end of 2020. Of them, three will be organic laws, 58 will be organic laws and the rest of the regulations will be regulated with 119 decrees, as specified by Calvo, who has explained that this The “transversal” plan pursues the objectives of the coalition, such as the reorientation of the production model, social cohesion, ecological transition, digitization or job creation. The vice president has also committed to having this plan published on the Transparency Portal in the coming days, which will make it possible to monitor the degree of compliance with it.

Among the norms to which he has alluded are the Professional Training Law or the Public Function Law. The repeal of the most damaging aspects of the labor reform is also scheduled for the next few months. “This does not mean that the Government is not going to process other laws by way of urgent legislation that are not here and that we need throughout the time we have left to end the year,” said Calvo. The vice president has also ensured that the new rules will include 140,000 million euros of European funds.

The fundamental tool to channel these funds, as the Government has said at all times, are the General Budgets for 2021 and which fall within the 171 proposals prepared by the Executive. The intention of the Treasury is to have them prepared to present them “in a timely manner” before October 1, although the intention is that they do not reach Congress until they have the support tied up. The main divergence that publicly emerges from the coalition is how to approach that negotiation. The Government spokesperson and Finance Minister, María Jesús Montero, has assured that the intention is to “broaden the base” of the support for the accounts “beyond” the formations that made the investiture possible.

However, he has said that it is a “preference” of the vice president of Social Rights, Pablo Iglesias, the order to face the negotiations. Iglesias maintains that what he has agreed with Pedro Sánchez is to negotiate first with the parties that voted yes to the investiture, then with those who abstained -among them ERC and EH Bildu- and finally with those who voted no, among which is Citizens. But in the socialist part of the Government they detail the negotiation and, in fact, underline that Inés Arrimadas is the one who has shown the most willingness to negotiate.

“Without a doubt we all share that we have to do hard work with all the formations that made the investiture possible but not only,” said Montero, who has included “all the formations of the parliamentary arch”, including the PP, which has advised that it is not possible to “put a profile” before the approval of these budgets at a time as serious as the pandemic.