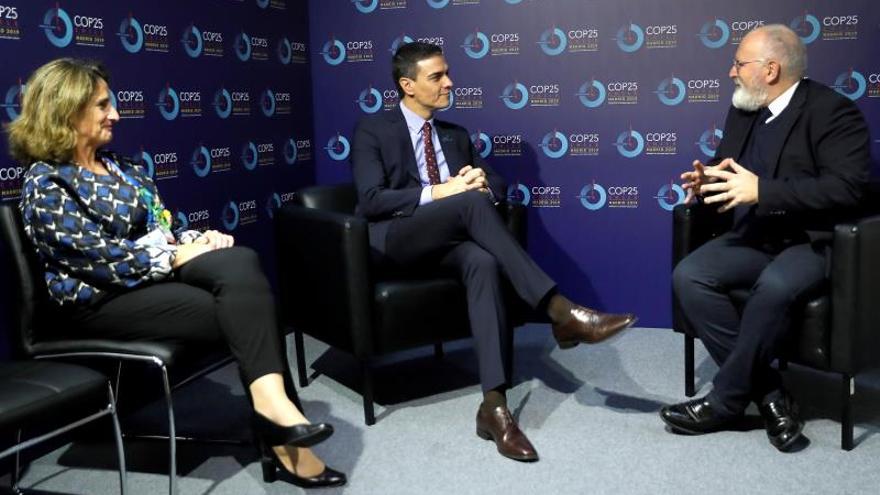 The Government has the support of the European Commission for the expected shock plan approved this Tuesday by the Council of Ministers to lower the cost of electricity and gas in the face of the price shock experienced by the European energy markets.

Both the Spanish Government and the European Commission have been in contact in recent weeks to face the dramatic increase in electricity prices in Spain, and letters, messages and conversations have been exchanged prior to the announcement of the last Council of Ministers. And in the course of these exchanges, the executive vice president of the European Commission for the Green Deal, Frans Timmermans, has ended up transferring to the Spanish Executive his harmony with the recently announced measures, according to sources familiar with the talks.

Faced with the conviction that extraordinary situations require extraordinary measures, and to fulfill the promise of the President of the Government to leave the bill of an average user in 2021 at 600 euros per year, a level similar to that of 2018, the Executive approved a Royal Decree on Tuesday -Law with a comprehensive package of measures that Pedro Sánchez described in the Senate as "rigorous, serious and solvent."

The third vice president, Teresa Ribera, defined it as "the most important package ever adopted to strengthen the position of the consumer in the face of a price race as a consequence of the evolution of gas that is unprecedented", and justified it in that the benefits and dividends of electricity companies grow in a way that "no" company "would have imagined" just six months ago. " "We must all collaborate."

Among other things, the decree, which according to Ribera guarantees the profitability of the companies, will temporarily withdraw (until March) 2,600 million euros from the electricity companies due to the excess income that hydroelectric and nuclear plants receive in the wholesale electricity market. that are benefiting from the historical rise in the price of gas, which is not part of their costs, but pushes up the prices of the so-called pool due to the marginalist design of this market - the price of the most expensive source of energy sets the price price of all - that does not give truce.

This Wednesday, the pool will exceed 170 euros per megawatt for the first time in history hour in a context of spectacular increases throughout Europe, driven by gas, whose price has risen 250% in one year. According to the INE, the escalation has caused final electricity prices to skyrocket in Spain until August by 34.9% year-on-year, although this increase compares with 2020 with the pool at a minimum due to the pandemic. The Government package also limits the increases in the regulated gas rate (TUR) to less than 5% for two quarters, deferring the future payment, despite the fact that the cost of the raw material would force a 29% rise in October .

Government sources assure that "Brussels understands and is aware" of this plan and they trust that the community authorities give their approval to some measures that the PP described this Tuesday as "confiscatory" and of "doubtful legality" among allusions to the " Peronism ". The Spanish Executive confirms that they have been in contact with the European authorities for days to discuss this matter. Ribera met last week with Vice President Timmermans and has also discussed this issue with the European Energy Commissioner, Kadri Simson, as confirmed by her department. The vice president already communicated weeks ago to the community authorities the need to undertake a coordinated action in the face of this extraordinary situation.

"We are committed to a just green transition, and ready to support Spain in its investments in clean, efficient energy and in its fight against energy poverty," Timmermans tweeted after meeting Ribera in Madrid a few days ago.

Brussels has also conveyed to the Government that "the EU has moved away from the regulations that set the prices of the energy market because that system was expensive, inefficient and was dominated by a few large companies that controlled the sector", and that "the EU legislation allows Member States to apply safeguards, such as public interventions in setting prices for the supply of electricity to vulnerable or power-scarce household customers under certain conditions. "

The Government hopes that other European countries will follow the path taken by Spain, given that, sources from the Ribera department point out, "this is not a situation in Spain and Portugal," which have their integrated electricity markets.

In this sense, the French Government has on the table the idea of ​​expanding the number of people who can access direct aid in the face of these increases, while Greece has announced an energy transition fund of 150 million to offset the increases in the price of electricity. light.

Last week, wholesale electricity benchmark prices in Germany for delivery next year reached more than € 90 / MWh, or roughly double the level at which they started the year, beating the previous record reached in the Summer 2008 when oil prices were approaching $ 150 a barrel.

Although many European countries have more stable tariffs than those of Spain (where the cost of energy in the regulated price of the PVPC electricity tariff is directly indexed to the pool price), in several member states, not only Spain, "there is a Very great latent concern that disproportionate increases will arrive in the receipt ", point out sources from the Ecological Transition. These sources indicate that "the best are coordinated measures at the European level", but "if there are not or they do not arrive on time", something that, as Ribera said on Tuesday "may take time", the "responsibility" of the Executive is to anticipate to an autumn-winter that is very complicated.

"If we had acted five years ago we would not be in this situation, because we would depend less on fossil fuels and natural gas. Throughout all these years we have seen that the prices of renewables have remained low and stable," said this Tuesday before the European Parliament Frans Timmermans, who added: "Only 20% of the increase in the price of energy can be attributed to CO2 prices. The rest is a consequence of the high demand in the market. There is a lack of energy" .

Ecological Transition, which has been designing these measures since the beginning of August in the face of the worrying scenario of gas prices for this winter, highlights that no other Member State has so far proposed a plan of this magnitude in the face of the energy crisis that is hitting the continent, which it especially affects countries like Spain, which practically functions as an energy island due to the lack of interconnections with France.

The package of measures on Tuesday caused sharp falls in the price of Endesa (totally dependent on the Spanish market) and Iberdrola, which between the two reduced their market capitalization by more than 2,200 million in a single day. The Aelec (former Unesa) employer's association rejected these "interventionist measures" and urged the Government "to seek truly effective solutions, which protect consumers with regulated tariffs from daily price volatility (one third of the total), and which do not penalize unfairly to a sector absolutely committed to the electrification and decarbonization of society, territorial development and employment, as well as the protection of vulnerable groups ".

Earlier, the nuclear lobby issued a statement in which threatened "messy shutdown" of reactors, which provide 20% of electricity in Spain. The Nuclear Forum already expressed this same warning in June and bases its threat not so much on the cut of "temporary application" approved this Tuesday, but on the withdrawal of the extra benefits that, according to the Government, these plants and hydroelectric plants are receiving due to the rise in CO2, which has also skyrocketed this year to all-time highs.

That closure, recalls the Government, would in any case require the approval of the electrical system operator. An anticipated nuclear blackout would leave the electricity system even more exposed to the ups and downs of natural gas and make the decarbonisation objectives committed by the Government with Brussels in the National Integrated Energy and Climate Plan (PNIEC) unfeasible. Ministry sources recall that the reduction of CO2 is applied from a price of 20 euros per ton of CO2, "which coincides with the price that was there when the electricity companies signed the closure protocol in March 2019" for a staggered nuclear blackout until 2035.

The Executive has proposed draining those revenues in a bill that is already in Congress and that it will be processed by urgent means together with the fund to remove the cost of the premiums for the oldest renewables from the electricity tariff.

Ecological Transition was aware that the fiscal relief of the bill approved by the emergency Government in June, when this escalation began, was only a patch that would allow time to adopt conjunctural measures with more weight in the face of the "worrying" scenario of prices of the gas for this winter.

A package that the Financial Times described Tuesday as "intervention" in the market and that has not been liked by the guardians of economic orthodoxy. "Punish the utilities it will not help the European energy transition ", warned the British newspaper, alluding to the greater regulatory risk that, it believes, will be associated with the massive investment in renewables that the continent needs to decarbonize.