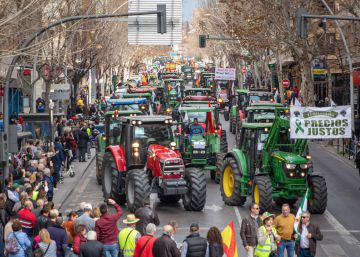 The countryside crisis It has become one of the main political concerns of the Government, worried about the possibility of having a revolt in Spain like that of yellow vests in France. After weeks of meetings and negotiations, the Executive has decided to take action with an important package of measures to be approved by the Council of Ministers on Tuesday. The analysis was completed at a meeting held on Monday in La Moncloa, which was attended by President Pedro Sánchez, Vice President Pablo Iglesias – who has had a leading role in this matter – and several affected ministers.

Among the most important measures to be taken on Tuesday is a reform of the law of the food chain that seeks to force prices to improve at source. Pressure mechanisms will be sought, especially to large stores and other large conglomerates that negotiate prices down with producers that in Spain are barely grouped in cooperatives that have the strength to impose conditions.

At the European summit held last weekend, Spain fought not to reduce agricultural aid and rejected the expected cut, so there was no agreement. At the end of the meeting of Heads of State and Government in Brussels that had the field and the CAP as the main protagonist, Sanchez confirmed that this reform would be approved in the Council of Ministers on Tuesday and spoke openly of “price control”, although the Agriculture Minister Luis Planas has repeatedly insisted that price control is unfeasible and would not be allowed by the EU. But the measures that last the Government are destined to force a rise of those prices in origin.

On Tuesday it will be detailed how the Executive intends to achieve it, but it is already clear that within the Government the thesis of those who believe that it is necessary to intervene in the market has triumphed because the situation is unsustainable and very unequal against the producers. In La Moncloa and in the affected ministries they are aware that to change the market it takes a long time, and above all to get producers to associate in cooperatives and modernize, something that takes years. But at the moment they want to approve this reform to try to achieve a rapid incidence even if it is less, especially to give a political response and to placate a crisis that does not stop worsening every week with some important incidents.

But in addition to this rule, which will be the star of the appointment of the Council of Ministers and that will explain Planas, there will be other palliative measures of more immediate effect for farm workers, who are suffering a very hard year, with drought, tariff crisis with US and also the price crash.

The bad year has meant that many farmers have not been able to fulfill the necessary steps and remain outside the agricultural subsidy. The Government will modify in an extraordinary way, with the justification of the drought and the crisis of tariffs, the regulation of access to this subsidy to reduce the number of necessary steps so that almost all the workers who usually request can access this help, a fixed population that hardly varies.

Another of the measures that the Executive will promote, and that has to do with the Ministry of Labor – which is co-proposer of this aid package to the field, hence the relevance that Yolanda Díaz, the minister, and Iglesias has acquired in this matter , its political head- is the generation of incentives, through bonus contributions, for companies to hire permanent or permanent workers in field work. And the inspection system will be changed as a result of the complaint by the UN rapporteur on the living conditions of some farm workers, especially immigrants, to monitor the conditions of the homes offered on some farms to these employees.