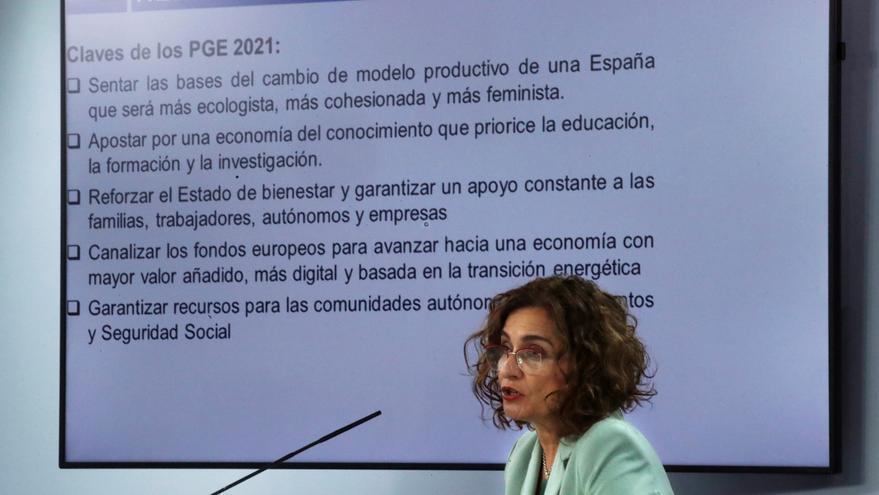 The coalition government expresses its concern about the “civil war phrases” that Vox has expressed throughout the weekend in which it came to launch a “first warning” to the socialists through social networks if they do not repeal the law of historical memory. But the Executive spokesperson has directly pointed out to the PP for staying in profile before the position of the Santiago Abascal party, which has considered a minority formation despite the exponential growth it had in the last elections, when it managed to be the third force with 52 deputies.

“He used civil war phrases such as popular uprising and the different powers of the State and it seems to me tremendously serious, even if only in language,” said the spokeswoman, María Jesús Montero, who has recognized that the extreme right formation “does not deceive to nobody”. The minister of Finance has also expressed that what is “worrying” is that Vox’s position “is followed by formations such as the PP, which does not only follow-up in the speech but also governs” thanks to the support of the extreme right. Montero has reiterated his concern “for the language and the type of appeals he is making under the consenting gaze of the PP.” “We should invite to lower the tone regarding insults, verbal aggressions or comments that go more in a civil war direction than concord or try to reach agreements,” Montero added.

In the press conference after the Council of Ministers, the different position held by the members of the Executive regarding the monarchy has been evidenced. The spokesperson has once again applauded the “push for transparency” that, in her opinion, the Crown has launched and has welcomed “the actions that the monarch has been taking with respect to this principle.” Montero has referred to the fact that “beyond the formations that compose it,” the Government “supports the Constitution from A to Z” and that this includes the parliamentary monarchy.

However, the Minister of Equality, Irene Montero, has recognized that the Government must be “sensitive” to the social debate on the suitability of the monarchy as a formula for organizing the head of state. “It is evident that there is a social debate about the monarchy. Some media are participating in that debate by conducting surveys, other media campaigning in favor of the monarchy – said the minister -. As a government, and with due institutional respect, we must be sensitive to that debate. ” “As a government, the important thing is that we be sensitive to that debate in society. I take this opportunity to thank you for making that contribution that perhaps is not being made from other spheres,” said Montero, who, however, has avoided speaking out directly on the refusal of the director of the Sociological Research Center, Jose Felix Tezanos, to include the Crown in the assessment of citizens. United We can have requested it through Congress, but the proposal was rejected with the votes of the PSOE.

The Government has also defended the application of the state of alarm in Madrid and eight other Madrid cities and has reiterated that this decision was made due to the “inaction” of the regional Executive. In fact, Montero has accused Ayuso of “not being very coherent” for criticizing the imposition of measures carried out by other autonomous communities in which the PP governs. “It is not understood”, said the spokeswoman about the position of the Madrid president: “They are measures aimed at protecting citizens from the inaction of the Community of Madrid or at least the criteria that the ministry had agreed on the previous days.” He has also warned that the fundamental thing is “to control a pandemic situation that is going to cost lives” and also in economic matters. “Because if the outbreaks are not controlled, more drastic economic measures would have to be taken,” warned Montero, who did not want to anticipate whether the government’s claim will be to extend the state of alarm for another fifteen days.

Although he has left the proposal to lower the majority required to renew the Judiciary in the hands of the parliamentary groups that support the Government, Montero has defended it vehemently and has accused Pablo Casado of maintaining a position that he considers “unreasonable” for refusing to reach an agreement at the same time that it has announced an appeal of unconstitutionality against the reform proposed by PSOE and United We Can.