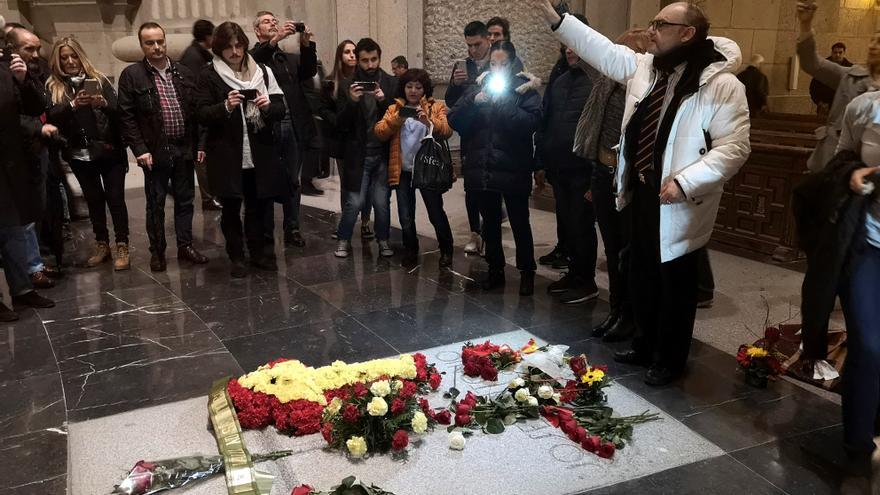 After the exhumation of Franco from the Valley of the Fallen, it will be the turn of José Antonio Primo de Rivera. Project approval of the Democratic Memory Law by the Council of Ministers this Tuesday places the transfer of his remains closer and closer, an intention that the Government had already stated when approving the decree that allowed to remove the dictator from Cuelgamuros, but that the norm, which still has a long way to go in the Cortes, clearly establishes. According to the text, the resignification of the mausoleum that is foreseen will imply “the relocation” of any mortal remains that occupy a “preeminent” place in the enclosure, as is the case of the founder of the Spanish Falange, buried at the foot of the main altar of the Basilica.

This is the largest mass grave in Spain: more than 33,000 human remains in eight chapels in the Valley of the Fallen

This has been confirmed by the recently released Minister of the Presidency, Relations with the Courts and Democratic Memory, Félix Bolaños, at the press conference after the meeting in La Moncloa. “We will have to proceed with their exhumation,” he said. The idea of ​​the Executive is to talk and agree on the process with the relatives of Primo de Rivera with the aim of carrying it out “in an agreed and simple way to comply with the law” and to avoid as much as possible a battle similar to the one that occurred with the family Frank, who opposed to the end. According to government sources, with the exhumation of the dictator, conversations were held with the family of the Falangist leader, who transferred their willingness to do so to the Executive, but his transfer did not come under the same legal package. Now, with the law in hand, they will offer their loved ones the possibility of burying him in the crypts, where the skeletal remains of thousands of reprisals and victims of the Civil War lie, or taking him to another place they wish.

Unlike the dictator, the norm establishes that Primo de Rivera (Madrid, April 24, 1903) may be in the Valley of the Fallen because he was executed during the war. In fact, the text stipulates that the burials will have the character of a “civil cemetery” and only the mortal remains of people who died as a result of the Civil War may lie in it “as a place of recognition, commemoration, remembrance and tribute to the victims there buried “. This is the case of the founder of Falange, who after the coup against the Government of the Second Republic was accused of conspiracy and military rebellion and was executed on November 20, 1936 in Alicante.

Buried first in a common grave, he was later transferred to the Escorial Monastery and 20 years later, shortly before its inauguration, the Franco dictatorship buried him in the Valley of the Fallen to give him a place of honor and exaltation. In 1975 the same was done with Franco’s corpse. Both removing the dictator and reinhumating the Falangist leader were two of the recommendations of the report that the Committee of Experts for the Future of the Valley of the Fallen prepared during the mandate of José Luis Rodríguez Zapatero. However, the date on which it could be carried out is still unknown, since the first step is the final approval of the Democratic Memory Law, which must still go through the proceedings in Congress and the Senate, where it will be subject to possible modifications.

What awaits the Valley of the Fallen

The Valley of the Fallen is the largest mass grave in Spain. It is estimated that the remains of 33,833 corpses of both sides rest in the basilica, just over 12,000 unidentified and a good part of the Republicans, transferred there without authorization or even knowledge of their families. Many have been looking for them for decades and demand their exhumations, a process that has been delayed over time but that the Government assures that it is “imminent” once the City Council of San Lorenzo del Escorial, where the fascist mausoleum is, has approved the building license that will allow to uncover 62 of these exhumations, which are those requested by the next of kin.

In addition to the recovery of these remains, he will face the complexity of the works in which he will advise a commission of forensic experts, the Valley of the Fallen is expected to undergo a redefinition process that has yet to be finalized. It will, of course, be a place of democratic memory that will be destined “to make known, through research and dissemination plans and mechanisms, the circumstances of its construction, the historical period in which it is inserted and its meaning, with the in order to strengthen constitutional and democratic values ​​”, stipulates the bill recently approved by the Council of Ministers.

According to government sources, one of the intentions will be to make visible the names of the republican victims who finally remain there, to try to grant them the recognition that the deceased of the national side, honored by the dictatorship, did have at the time. The norm will also extinguish the Foundation of the Holy Cross of the Valley of the Fallen and provides for the expulsion of the Benedictine friars through a Royal Decree that will be processed in parallel and that will in all likelihood run into opposition from the monks. The fate of the basilica, which the Government does not intend to desecrate, it is already being negotiated between the Executive and the Church.