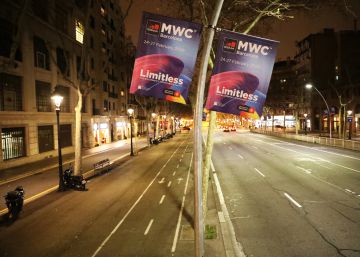 The hangover of the Mobile World Congress suspension in Barcelona leaves an important economic hole and many doubts about who will compensate the injured. But also a question about the proportionality of the measure. The Government, one day after the drastic decision, maintains its account: “There is no public health reason that advises taking any action or that prevents the celebration of events of this kind,” said Health Minister Salvador Illa, upon arrival at a meeting with their counterparts in Brussels.

He was not the only member of the Government who expressed his doubts about the cancellation of the congress, for which he finds no sanitary reasons that justify it. “It is not because of any health alert in our country that we are in a very good response situation,” Vice President Carmen Calvo said Thursday. Something similar said also Vice President Nadia Calviño.

“With the information available at this time and the recommendation of public health experts, there is no public health reason that prevents holding such an event in our country,” said the Minister of Economy, which highlighted the Spanish health system as one of the “most efficient and effective in the world”.

“We have a very powerful national health system, we are prepared to face any situation, “insisted the Minister of Health. The Executive thus insists on conveying a message of tranquility that has proved insufficient to calm the defections of the Catalan technology fair, finally victim of fear of a virus born more than 9,000 kilometers from Barcelona.

The Spanish Government is evaluating the latest information published by the Chinese authorities, which they talk about a rebound in cases of infection in the province of Hubei, the focus of the Covid-19 epidemic. “Our ministry teams are evaluating this new information, it seems to be due to a new computer system, but we appreciate all the information in this case,” said Illa.

The minister did not want to speculate on why major events such as the Geneva Motor Show, Paris Fashion Week, the ARCO art fair or the Integrated Systems Europe (ISE) from Amsterdam keep going while Mobile closes its doors. “Our sole objective is to guarantee the health of the citizens of Barcelona, ​​Catalonia and Spain. And based on that we decide according to what the technicians recommend and the daily evaluation we are doing,” he said.

The head of Health congratulated that the 19 Spaniards repatriated from Wuhan, put in quarantine at the Gómez Ulla hospital two weeks ago, finish this Thursday your mandatory isolation because you have not presented symptoms. And he believes that Spain is facing the crisis correctly, as proof that there have only been two cases of contagion so far. “You have to have a policy of information transparency and daily monitoring of the evolution of the coronavirus that I do not want to minimize,” he said.

Salvador Illa will meet Thursday with the Health Commissioner, Cypriot Stella Kyriakides, and has conversed upon arrival in the community capital with her French and Italian counterparts. The virus crisis will be the epicenter of the meeting of the ministers. “There has to be a clear signal that we work in coordination and that we are going to make decisions based on scientific evidence and the criteria of the experts, not on any other type of reasons,” said the minister.

This will prevent the purchase of fakes

The price of new construction housing in the districts of Barcelona