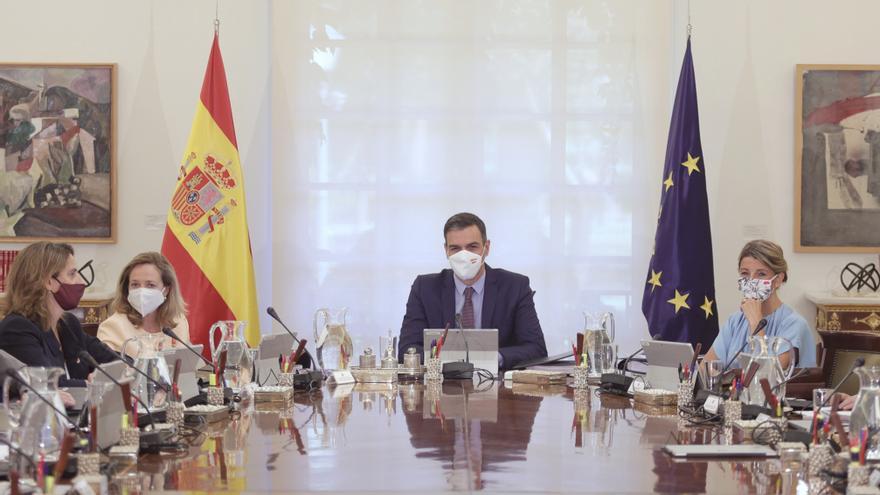 The crisis of the Government attacked by Pedro Sánchez two weeks ago meant the replacement of eight ministries in the socialist sector of the coalition, with changes in the coordination of the Executive and new interlocutions in departments, such as Transport and Justice, which manage affairs key that have been locked in the Cabinet for several months. This is the case of the new housing law or the pact of a formula that allows the renewal of bodies such as the General Council of the Judiciary (CGPJ), which has already accumulated more than two years of interim status. The 10 days that remain until the last Council of Ministers is held before the summer break are insufficient and both the PSOE and United We can assume that he will recover upon return.

The most obvious case of how the government crisis has frozen pending negotiations in the Executive is the housing law, which has already accumulated months of delay due to the rejection of the PSOE to introduce maximum ceilings as a formula to lower the price of rents in the areas stressed, as reflected in the budget agreement signed by the members of the coalition at the end of 2020.

In Unidos Podemos they trusted that the departure of José Luis Ábalos from the department and his replacement by Raquel Sánchez would allow the situation to be unblocked. The until now mayor of Gavá voted in favor of keeping the cities of the metropolitan area of ​​Barcelona as “stressed areas” within the framework of the Catalan housing law, which allows limiting rental prices and that the central government has appealed to the Constitutional Court for invasion of powers.

But the illusion has lasted very little. At the first meeting of the Council of Ministers after the appointment of Sánchez, the Minister of Social Rights and negotiator on housing for United We Can, Ione Belarra, conveyed to the Minister of Transportation her willingness to meet whenever she wanted, according to Government sources have confirmed to elDiario.es. That was on July 13. Later, he has done it again, according to the same sources.

At the moment, the also secretary general of Podemos has not obtained an official response. What has been produced are some statements by Sánchez that have fallen like a jug of cold water in the ranks of United We Can. The Minister of Transport spoke of a period of “months” to reach an agreement within the coalition government, which would further postpone the parliamentary process of the regulation, which could be extended until the last term of the legislature.

“There is a will to reach an agreement and we are in a position to reach it in the coming months, because we are aware that an ambitious housing law is necessary,” Sánchez said in statements to the media in Catalonia. But the most worrying thing for United We Can is not the deadline, this being relevant, but the minister’s negotiating position. Sánchez has recognized differences with the minority partner and has defended the tax incentives for homeowners already proposed by Ábalos as “a mechanism that has been shown to work”, as well as “agreeing with the private sector how to establish regulations” to “prohibit or limit abusive increases in rental prices.”

United We Can not have detected any substantial modification in the approach of the new minister. “There is not much to celebrate”, point out sources from the confederal space, from where they point out that it has been revealed since the changes are not to make an Executive “more to the left.”

In public, both Belarra and the leader of United We Can in the Government, Yolanda Díaz, have defended the need to undertake the final negotiation of the housing law, and have promised not to renounce what was agreed by the parties and that It includes, in addition to the 2020 budget agreement, that of the coalition government signed by Pedro Sánchez and Pablo Iglesias.

Precisely, the President of the Government has traveled to the United States, where he has raised with vulture funds like BlackRock or Blackstone, which control tens of thousands of homes in Spain and which, according to El País, would have transferred their fears about the regulations to the socialist leader. The response from United We Can has come twice. First, it was Yolanda Díaz, who said: “I understand the reflection of investment funds, their objective is to make money. But we rulers have to defend our people and our country. “Later, Belarra herself settled:”Those who vote in Congress are the deputies and deputies “.

The housing law was not the only one by which, according to what was published, the vulture funds were interested in his meeting with Pedro Sánchez. Also the future of the labor market worries these companies whose mission is to invest the enormous amount of money that they manage to achieve the maximum possible profitability.

This negotiation is proceeding more slowly, within the framework of social dialogue, and it is not expected to conclude until the latter part of the year. Díaz herself, Minister of Labor, said in parliament that she would “render accounts” if 2022 were reached and the work was not “finished.” Negotiation by the SMI is also related to its department, but the Government yes you should have defined imminently what to do with the indicator.

This matter will be closed by Sánchez and Díaz hand in hand. But it will not be the only subject that they will address in their next meetings. The renewal of the CGPJ, which the PP has blocked for more than two years, is another of the obstacles that the coalition government faces. The second vice president assured this Thursday that it is going to be addressed in an early meeting. “As soon as we decide, we will make a statement” on what proposal the government will make, he said. “Let me solve it in the coalition, we will communicate later, also the position of United We Can,” he settled. The president is clear that he will not take up the controversial proposal to modify the law to lower the majorities necessary to elect new members, as the former Minister of Justice Juan Carlos Campo promised with Brussels.

In this matter, as in housing, the positions are quite conflicting. But unlike with the issue of rents, in this case the document is vague and speaks of promoting “consensus parliamentary agreements that allow the election and renewal of constitutional bodies and independent bodies.”

In Unidos Podemos they argue that the only way out is to modify the majorities required by law for the appointment of members of the Judiciary, while the PSOE, which initially accepted this option, now considers it unfeasible. Thus, while the PP remains in its position, a body whose composition is made up of people proposed mostly by Pablo Casado’s party will not be renewed.

The coalition will resume its work at full capacity in the last week of August, after the two weeks of rest that the ministerial teams will have. On the table then they will have a lot of new initiatives to agree on within the Executive before reaching Congress.

The General State Budgets will undoubtedly be one of the keys to the second semester. Normally it is already one of the most important laws that is passed every year. In addition, this year it will take into account a large part of the recovery funds of the European Union. But they will also serve, as happened in 2020, for the coalition to open a political negotiation on other pending issues.

The budget negotiation is already underway, with the teams preparing their proposals to determine the spending ceiling, the first step of the law. The second vice president, Yolanda Díaz, has already raised the general lines of the position that they will defend in the talks before the United We can parliamentary group. Díaz demanded “courage” from the PSOE and said: “It must be the Budgets that redistribute the income and benefits of those who have the most. That is what we are here for, to redistribute income and wealth“.

Because together with the negotiation of the Budgets there will be fiscal issues that the Government agreement includes and that, for now, have been postponed in its central part. The Ministry of Finance commissioned a report from a group of experts that will not be ready until 2022, but at Unidos Podemos they want to introduce some measures already, fearful that, fiscally, what is not done will be difficult to achieve when the electoral moment approaches. of 2023.

Another of the fronts that remains underground, for now, is how to tackle electricity prices, which have reached record levels these weeks without the measures adopted by the third vice president, Teresa Ribera, have reduced the bill.

The coalition will have to resolve other laws. As the second wave of regulations prepared by the Ministry of Equality of Irene Montero after having won the PSOE pulses to get the trans law Y LGTBI or that of only yes is yes. The first will be the reform of the abortion law, which aims to recover the freedom of women aged 16 to 18 to interrupt her pregnancy without parental consent, but also to regulate conscientious objection so that it does not become an impediment to exercise the right, eliminate the mandatory period of reflection or try to end obstetric violence.

The law against trafficking will be another of the initiatives of the department of Montero at a time when the PSOE has opted to promote a law for the abolition of prostitution. The debate will take place this fall. It will be then when the new Executive really starts moving and it will be seen if the changes introduced by Pedro Sánchez allow to improve the relationship between the parties of the coalition that, if the protagonists say what their protagonists say, will have to be understood at least until the end of 2023.