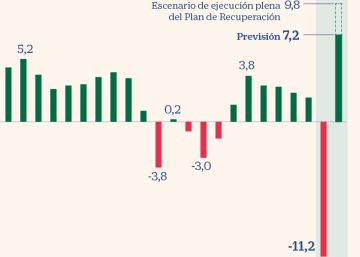 The Government certified yesterday that the coronavirus crisis in Spain is proving even more devastating than it calculated in spring by updating its macroeconomic forecast table downwards as a preliminary step to boost the budget plan for 2021. The new government calculations, presented After the approval of the Council of Ministers by the Vice President of Economic Affairs, Nadia Calviño, they confirm that the recession is deeper; the deficit and the debt generated, more bulky; and that the reactivation is more uncertain than what the Executive had transferred to Brussels in May. However, and although he admits that the recovery will take years, he gives more power to the inertial rebound of the economy in 2021 and estimates that the Recovery Plan that the President of the Government will present today, the investment roadmap that will be made with the European aid, it will boost GDP almost to double digits next year.

Specifically, the Executive now assumes that Spanish GDP will go from growing by 2% in 2019 to plummeting by 11.2% this year, compared to the 9.2% initially estimated, already approaching the forecast of a 12% fall that they give the bulk of analysts.

The exit from this chasm would start in 2021, when the recovery will be only partial, with an inertial economic growth of 7.2%, compared to the 6.8% previously mentioned. However, the Government estimates that the 27.4 billion euros in European aid that it aspires to receive next year could increase the GDP rise in 2021 by 2.6 more points, to 9.8%, thanks to the Plan of Recovery, Transformation and Resilience to be announced today.

On the public accounts side, at a time when the European Union has suspended fiscal rules in 2020 and 2021 in order to encourage economic reactivation, the Government expects the deficit to skyrocket from 2.8% of GDP in 2019 to 11.3% this year, compared to 10.3% that it had assumed a priori. As a consequence, the public debt would jump from 95.5% to 118% in 2020, and not the 115.5% previously raised. Looking ahead to next year, the Government trusts that the fiscal hole will already relax to 7.7%, although it did not detail how much of the improvement will be inertial and which due to the improvement in income that it plans to achieve with the new Budgets.

Although it does not offer figures for the following years, the Executive assumes that the inertial recovery would not occur before 2024, although it estimates that its plan of measures could accelerate the return to the levels from 2019 to 2022.

Calviño defended that the measures already deployed by the Government, including the use of ERTEs to contain the destruction of jobs, public guarantees to facilitate financing to companies, or the various social aid granted, have made it possible to avoid a fall of 25 % of GDP this year and the destruction of 3.5 million jobs. Thus, he illustrated, after the fall of 5.2% of GDP in the first quarter, and 17.8% in the second, the economy advanced by around 13% in the third and 2.7 of the 3.4 millions of people affected by ERTE have already returned to their jobs. Calviño admitted that uncertainty prevails and that virus outbreaks are a risk, but said that this is overcome if measures are taken in time.

Risks The downward revision that the Government made yesterday on its economic forecasts for 2020, when it expects a fall in GDP of 11.2%, improves, however, the growth estimate for 2021, to 7.2%, and includes an even more positive scenario that indicates that the use of European aid could boost the recovery up to 9.8%. An estimate that errs on optimism, according to the Independent Authority for Fiscal Responsibility (Airef). As part of its work to review the government’s forecasts, the body chaired by Cristina Herrero announced that, in a “context of extreme uncertainty, it endorses this scenario as it considers that it could materialize”, but only “if favorable circumstances converge both in the evolution of the pandemic as well as in the execution and impact of the funds received through European funds ”. Thus, its own forecast is that GDP will fall from 11.6% to 12.1% this year and grow from 6.5% to 9.9% in 2021. Airef recommended that “fiscal forecasts be made with caution necessary to contemplate the possibility that scenarios more adverse than that of the Government materialize ”.

The VAT of 2017. In parallel, another risk threatens the government’s accounts after the Supreme Court accepted Castilla y León’s appeal against the State for the decrease in income from the 2017 VAT settlement, on account of the new system implemented that year, which opens the door to similar claims from other regions.