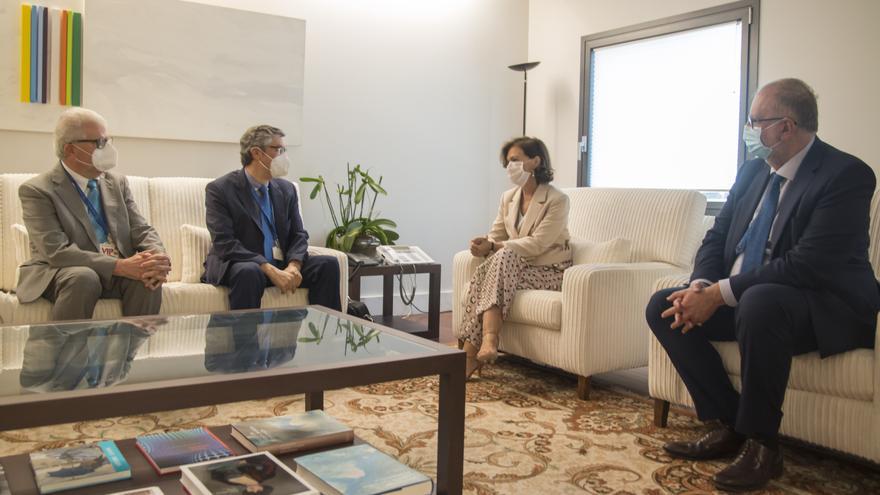 A visible commitment to “the neutrality of the public powers” in the face of the religious fact, which ends the covert confessionalism in favor of the Catholic Church that has prevailed in the last forty years in Spain. These are the keys to the round of meetings that the first vice-president (and in charge of relations with religious confessions), Carmen Calvo, has held throughout this morning with the top evangelical, Jewish and Muslim representatives, whom she has received in Moncloa. Tomorrow she will make her own with the Church of Jesus Christ of the Last Days, Jehovah’s Witnesses and Buddhists, and already in September with the Orthodox Church, confessions without an agreement signed with the State but recognized as ‘of notorious roots’.

Before all of them – as it did before during the meeting with the president of the Episcopal Conference, Juan José Omella – the Government claimed “the need to delve into the neutrality of public powers, whose example was made visible in the recent State act in tribute to the victims of COVID19 “. As advanced eldiario.es, it seeks to consecrate the full secularism of the State, which ends Catholic funerals or the presence of religious symbolism in public events. And equality of treatment, as demonstrated by the fact that, for the first time, it was not the Prime Minister who received the leader of the Catholic Church, and the Minister of Justice the rest of the religions. Now, Carmen Calvo is the maximum representative before the religious world.

The first appointment, at ten in the morning, occurred with the president of the Federation of Evangelical Religious Entities of Spain (FEREDE), Manuel Rodríguez, and its executive secretary, Mariano Blázquez. According to the Vice-presidency, during the meeting it was agreed to resume some paralyzed issues in recent times, such as the situation of retired evangelical pastors who were unable to contribute before 1999; the possibility of recognition of the master’s degrees for the training of evangelical religion teachers or the improvement of religious assistance systems in public centers. Evangelicals also called for the opening of more places of worship.

After the evangelicals, Calvo met with the president of the Federation of Jewish Communities of Spain, Isaac Benzaquén. “One of the biggest concerns of the Jewish community is the growth of anti-Semitism in the world and in particular in Europe, where it has had very serious consequences, and although the situation in Spain is far from being that serious, it does not escape the phenomenon of anti-Semitism “, underlines Moncloa’s note.

In this regard, Carmen Calvo has pointed out that “Spain unconditionally condemns anti-Semitism and has a pioneering regulatory framework in the fight against it and discrimination for this reason.” In this sense, the Spanish State endorses the operational definition of ‘anti-Semitism’ (not legally binding) adopted by the International Alliance for the Memory of the Holocaust (IHRA) in Bucharest on May 26, 2016, “as a useful orientation tool in education and training. ”

During the meeting, other topics were discussed such as the fact that the oppositions are compatible with the exercise of religious freedom and the fulfillment of the sabbatical rest, or the recovery and knowledge of Sephardic history and heritage as a legacy for Spain. These issues will be on the agenda of future work with the FCJE.

Finally, the vice president met the recently elected new president of the Spanish Islamic Commission, Ayman Adlbi. At the last meeting in the morning, Calvo reaffirmed the Government’s commitment to continue working on issues such as the teaching of Islam in secondary education in Ceuta and Melilla, the formation of imams, the opening of places of worship, or the need to improve burial spaces.

“Vice President Carmen Calvo has also been able to verify that the Government and the Islamic Commission maintain their joint effort, in order to advance in the exercise of religious freedom that is the guarantee for coexistence in an open, plural, diverse and tolerant society as it is the Spanish society “, concludes the note.