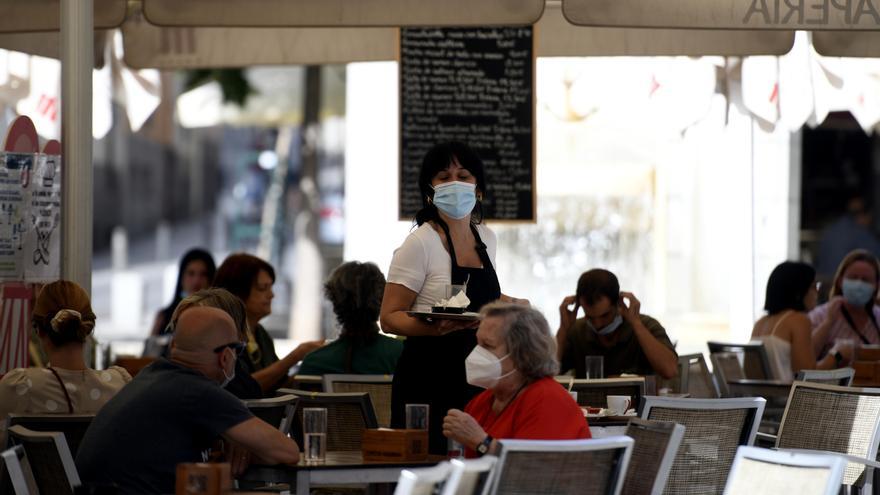 A dinner at home with friends to make up for time, a family birthday where cousins, uncles and grandparents get together. They are now everyday scenes that, after months of confinement, are repeated in the so-called ‘new normal’, and more so in the middle of summer. But many are accompanied by hugs, kisses, little interpersonal distance, common dishes or the banishment of masks. Confidence invites us to lower our guard and reduces the feeling of threat in the face of the coronavirus. However, the reality is that the risk is still there. Outbreaks in these close encounters are one of the most frequent types at a time when the escalation of infections has forced Spain to take coordinated measures to try to contain the curve.

Among them are the prohibition of smoking in public spaces without distance or the closure of discos, but, in addition, there are several recommendations, explained the Minister of Health, Salvador Illa: to limit the meetings to the coexistence unit and limit them to no more than ten people; He has also recalled ‘the three Ms’: mask, meters (distance) and hands (hygiene). Those associated with family and friends gatherings are, along with outbreaks of nightlife and on farms, others highlighted by the ministry. According to his latest data, the social sphere is the first focus and reaches 35% of the more than 800 active outbreaks. Of these, the so-called ‘family reunions and private parties’ account for 18.5% of the total. It is followed by those that have been produced in leisure venues (7%), which are less in absolute number, but generate more positive in proportion.

Those produced between family members or groups of friends are usually smaller, usually less than ten people – 75% of the total are – but the institutions are warning of their prevalence: in the last week the Ministry of Health of the Generalitat Valenciana 48% of the new registered in the community have encrypted in this origin and in Andalusia they account for more than half (56%). Recent examples are numerous: from a barbecue with friends in Santander with five positives to a birthday in Alcalá de Henares or a communion in Valladolid. In addition, there are those that originate in one area, but move to another, such as the one that occurred a few days ago at a dinner with friends in Vimianzo (A Coruña) that has spread to a company due to the presence of one of the employees. Health calls them ‘mixed outbreaks’ and, according to the latest data, they account for another 18% of the total.

However, family and friends “are more controllable” and contact tracing, a key element in cutting transmission chains, is easier, explains the former president and spokesman of the Spanish Society of Public Health and Health Administration (SESPAS) , Joan Ramón Villalbí. But that does not mean that they are not dangerous, and in fact, “they play a non-negligible role” in maintaining the transmission of the coronavirus: of the 9,200 cases associated with active outbreaks, 1,100 are framed in family gatherings and private parties. The expert believes that “it is not easy to give up” these meetings, but “you do have to try” to do it in the best way. For example, now in summer, he says, take the opportunity to meet in the open air, limit the number of guests or take into account the elderly, vulnerable and at risk.

“Not because ‘we’ are exempt”

Expert voices warn that the proximity encourages the relaxation of the measures, but “there is no real epidemiological logic in this attitude”, explains Daniel López-Acuña, former director of Health Action in Crisis Situations at the WHO and professor at the Andalusian School of Public Health. The specialist explains that we tend to unconsciously think that “as it is family or friends there is no risk, but we do not know that and, on the contrary, the evidence we are having is that there are several outbreaks associated with these spaces”. The fact that there is no member of the group who is symptomatic at that time does not mean that they cannot be infected, experts warn, because they may be asymptomatic, that they have not yet developed symptoms or that they are very mild.

The same idea is conveyed by Elena Martínez, vice president of the Spanish Epidemiology Society (SEE), who insists that protection measures must be maintained in these areas as far as possible, something in which it is key “not to stop with awareness “from the institutions. In her opinion, the problem is that “in the end one gets used to a certain level of risk”, despite even the harshness of the previous months, with thousands of hospitalized and deceased. “Many times, and more if there have been no infections around you, you have the feeling that COVID-19 is there, but a feeling that nothing is happening begins to grow” after opening up to social and economic life, he says the epidemiologist.

This low perception of risk is also what the psychologist Jesús Linares points out and that, in many cases, it occurs more easily among young people. And it also points to two elements: on the one hand, the consideration that “what I am doing is not going to affect the rest of society, in some way we tend to extend responsibility to the collective, but not at the individual level”, and on the other, the generalization of “selective perception”. That is, the feeling that we are more or less complying with the rules and any information that contradicts that will be discarded.

For this reason, several organizations have begun to initiate recommendation campaigns to act in these spaces. This is the case of the Generalitat Valenciana, which with the idea “We look forward to meeting! Let’s do it with caution” offers several tips. Because the truth is that giving up social contact is a toll that is not easy to pay as a society, nor is it healthy, explains Linares. “After all that we have lived, we need to relate and we need human contact. It is something very natural and to which we tend a lot in our society, so getting used to it is complex.” All specialists agree that it is not easy and that lowering your guard is a more or less natural reaction, but “you have to have the chip on this,” illustrates López-Acuña. The fundamental message to be conveyed is that “not because ‘we’ are exempt and free from the virus,” he says in reference to family and friends closeness.

The recipe, at least on paper, is clear. The indications of the Valencian Generalitat coincide and also those of the Collegiate Nursing Organization, which at the end of July began a campaign with instructions on how to behave and prepare for the ‘new normal’ meetings to minimize the risk: among them, choose the outdoors whenever possible, where the possibility of transmission is less than in closed spaces, try to maintain a minimum distance of 1.5 meters between non-cohabitants, greet without hugs or kisses, wash hands frequently, reinforce ventilation if it is a closed place, or put on the mask when not eating or drinking. On the table, there are also guidelines. Ideally, only one person should put it, that dishes are not shared and that the glasses are well identified so as not to mix them.

According to Guadalupe Fontán, a nurse at the Research Institute of the General Nursing Council, it is “very common” that “we pass objects between guests, such as a jug of water, salt or oil”, something that must be avoided. Or also that each person chop salad or starters, for example, with their own fork. In these cases, the recommendation is to use cutlery to serve on individual plates. “We know that it is difficult, but these outbreaks are playing an important role. We must be able to be with family and friends and see them, but we must take into account the measures,” continues Fontán. To favor it, Linares slides one last recommendation: “Perhaps it is a good thing to have previously discussed it and prepare the meeting because I believe that if we let things arise, there is less chance that the rules will be met.”