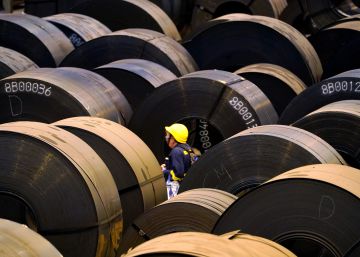 The Minister of Industry, Commerce and Tourism, Reyes Maroto, has requested by letter to the European Commission that, once Brexit occurs, review the "safeguard measures" (temporary limits) in force in Europe on steel imports. Without mentioning it, the petition refers especially to imports of steel from China, which accounts for more than half of world production and exports at prices that make European producers very difficult to compete, according to sources from the Ministry.

The letter, dated October 8 and to which EL PAÍS has had access, is addressed to the outgoing Commerce Commissioner, Cecilia Malmström – ends her term on October 31; the idea is to transfer the petition to his replacement, the Irish Phil Hogan. In it, Reyes Maroto, reminds Malmström that "the steel companies of the Union are in a difficult situation to the point of considering the closure of some production lines and plants, due to low demand and import competition" , especially from China. In view of this, he asks the Commissioner to "once the Brexit occurs, carry out an urgent review of the (safeguard) measures in order to adapt them to the new situation".

Maroto acknowledges to the Commissioner the effort to present a first review of these safeguard measures, presented to the Member States on September 4, which Spain supported, but understands that the British exit from the EU, especially if it occurs without agreement , forces to review these measures again. "The quotas for all product categories will have to be recalculated," he explains, and in some of them the impact "could be very important."

The safeguard measures currently in force on imports of steel products date from February this year, when the European Council approved a proposal from the European Commission. Basically, they allow free entry into the EU of products from abroad until completing quotas calculated based on imports from the 2015-2017 period. From these quotas – each product has its own -, imports are taxed at a 25% tariff.

The minister acknowledges that the issue of limits on steel imports is "of great interest to Spain, given the importance of the sector for our country and the difficulties it has recently experienced." During Maroto's tenure, the aluminum multinational Alcoa announced the closure of two of its plants in Spain, and the stoppage of the automobile industry also affects domestic producers, according to denounced in summer the steel company, Unesid. The sector has repeatedly demanded that the Minister approve the Statute of Electrointensive Consumers, which gives companies that consume a lot of electricity, such as steel, rebates in the energy bill, which benefits their competitiveness.

The Spanish steel industry registered a production of 14.3 million tons in 2018, 0.8% less than the previous year, according to Unesid data. Spanish manufacturers exported 8.5 million tons, worth 7,996 million euros, 0.6% more than a year earlier, according to the Tax Agency. But imports increased much more, 8.6% in volume (10.8 million tons) and 13.4% in value, up to 8,206 million, so the trade balance became a deficit for the first time in 10 years. The steel exported by Spain, although it fell in price, was about 200 euros more expensive than the imported one (938 euros per tonne compared to 758).