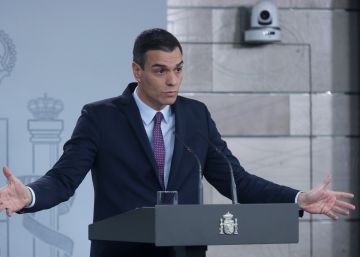 The agenda of the Council of Ministers this Tuesday is loaded. The Executive expects to give the green light to a declaration of climatic emergency and the rise of 2% salary of the officials. Both measures are commitments that Pedro Sánchez assumed while in office and that, as in the case of pensions, are seeing the light in the early days of the new Government.

The first initiative has a lot of declaration of political intentions, since in Spain there is no legal figure of the declaration of climatic emergency. However, the Government will not be the first national or international institution to do so: Barcelona City Council He launched it this January, the plenary session of the Madrid City Council approved it in September (with the votes against the PP and Vox) and in November the European Parliament did.

Since last September, this commitment was on Pedro Sánchez's agenda. A non-law proposal brought to Congress by United We was one of the few initiatives that came forward in the short term that ended without investiture. In that motion the Executive was called to approve "with the utmost urgency" this statement. In the debate, the then Minister for the Ecological Transition in office and now Vice President, Teresa Ribera, took on the challenge. Then he spoke of the first meeting of the Council of Ministers. It hasn't taken much longer: it was on the third date.

In addition, the Council of Ministers plans to approve the salary increase of officials tomorrow. The increase will be 2% and is part of the last fixed annual increase that the Executive of Mariano Rajoy agreed with the unions of public workers at the beginning of 2018. With this decision, Pedro Sánchez complies with the commitment he acquired before the end of the year to give birth time to the pension update and the salaries of the officials when they cease to be in office, confirm sources of the Executive.

“As soon as possible" With this expression, the chief of staff of the President of the Government, Iván Redondo, reiterated by letter to the unions last Friday that among the plans of the Government was to raise the salary of officials quickly. He didn't give the detail of when. But that mystery is already clear: it will be this Tuesday. In the letter, he also confirmed another commitment: the increase would have “retroactive effects”, that is, even if it is approved on Tuesday, January 21, it will be as if it were in force since January 1.

After losses of purchasing power that exceeded 20%, almost two years ago, the then head of Public Function, Cristóbal Montoro, signed an agreement with the representatives of the officials so that they could recover purchasing power between 2018 and 2020. According to the text , the increase during this period could reach 8.5%.

However, seeing the economic forecasts does not seem that this improvement will be achieved. The pact set fixed increases of 1.75% in 2018, 2.25% in 2019 and 2% in 2020. To this last percentage could add an additional increase if the economy would grow above 2%. But this Monday, the IMF has forecast a 1.6% growth for Spain this year. However, the increase at the end of the year could never be less than 2.3%.