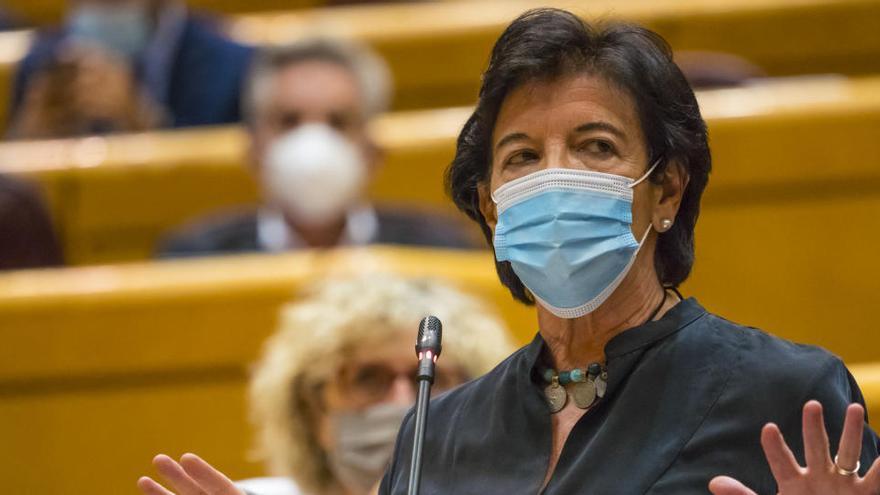 The Commission of Education Congress has approved this Friday your opinion a la Lomloe or Celaá law, which incorporates changes to the initial text through amendments to Spanish or concerted centers, and that they have highlighted the discrepancies between the left and right parties.

The text, which goes to the Plenary of Congress next Thursday, where changes may still be applied because some “live” amendments remain, It has gone ahead for all groups except PP, Ciudadanos, Vox and UPN.

Most parties defend this law because with it the Lomce or Wert law is repealed, while PP, Ciudadanos and Vox have announced that they will take it to the Constitutional Court for the section on Spanish or for attacking the freedom of families to choose a concerted center.

Precisely this norm has provoked a campaign in favor of the one arranged by the More Plural Platform, which has been concentrated this Friday for the third day in front of Congress.

The Celaá law, which must also pass through the Senate, would be approved in his case before next spring, according to parliamentary sources. It would be the eighth educational law of democracy.

Summary of how the Celaá law looks, for now:

1- Spanish: It ceases to appear as the vehicular language of education and as the official language of the State. The administrations will guarantee the right to receive teachings in Spanish and in co-official languages ​​to achieve full and equivalent mastery.

2- Exemption from examining co-official languages: in those communities with more than one official language, students may be exempt from taking the assessment of the area of ​​their own language and literature.

3- Religion: Mandatory offer, eliminates the obligation to take an alternative subject and the grade will not count for university access processes or scholarships.

4- Civic and ethical values: It will be studied in Primary and Secondary, with special attention to respect for Human and Child Rights and equality.

5- Curriculum: the basic contents of the minimum teachings set by the Ministry will not affect more than 50% of the schedules for the communities with a co-official language or 60% for the rest.

6- Repetition of course: students will pass the course when the teaching team considers it and also with one or two failed subjects. Repeating will be exceptional and the student will only be able to do it twice a maximum throughout Primary and Secondary.

7- Separation of students by gender: the centers supported partially or totally with public funds will not separate the students based on their gender.

8- Special education: In ten years, ordinary centers must have the resources to serve students with disabilities. The administrations will provide support to the Special Education centers for students who require highly specialized attention.

9- Student admission: When there are not enough places, admission to a center will be governed by the priority criteria of enrolled siblings, proximity and income. Afterwards, being a large family or other circumstances will be taken into account.

10- Admission commissions: Admission fees when the demand for places exceeds the supply. They will ensure the balanced presence in centers with public funds of students in need of educational support or underprivileged.

11- Concerted: eliminates the “social demand” to open new centers or increase places. They will not be able to receive fees from families for receiving free education or impose contributions to foundations or associations.

12- Public land: progressive increase in school positions in the public network. The municipalities will cooperate in obtaining the necessary lots to build public centers.

13- Places in children: increase in public places 0-3 years. Promote the existence of public centers that incorporate Infant with other educational stages.

17- Defense of the planet: strengthen the affective capacities of the student in their relationships with the planet.

18- Certification in secondary: Upon completion of ESO, students will receive an official certification with the years studied and the level of skills.

19- Baccalaureate: It can be done in three years and the possibility is also contemplated that the teaching team decides to obtain the degree for the student who has passed the subjects except one.

20- Adult education: Those over 16 years of age with a work contract or high performance athletes may join adult education.

23- Digitization: development of students’ digital competence at all educational stages.

24- Rural school: A free place in Primary is guaranteed in the student’s own municipality which, in the case of moving to the nearest school zone, will be minimizing displacement.

25- Plan for emergency situations: Education and communities will define a contingency plan to continue educational activity in situations such as the coronavirus crisis.