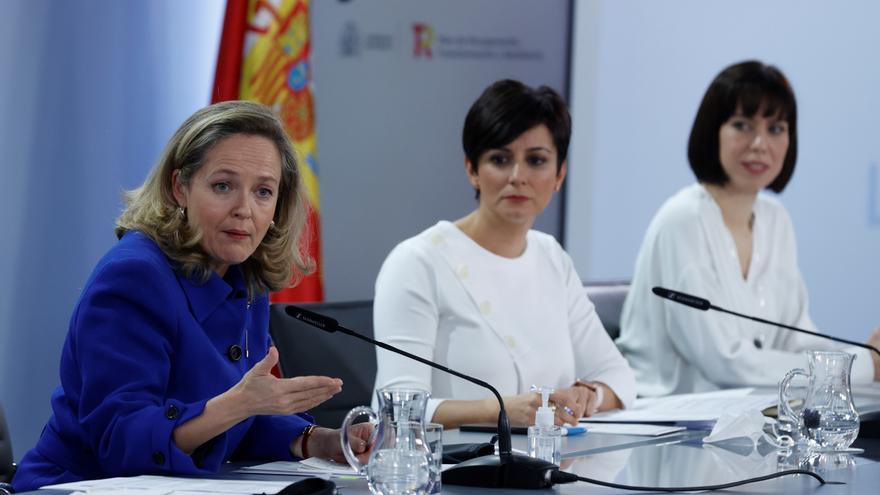 The Council of Ministers approved this Friday two laws promoted by the Vice President of Economic Affairs, Nadia Calviño. One of them is the reform of the audiovisual law, agreed with ERC in the budget negotiation, and the other is known as 'Crea y Crece' to facilitate the creation of companies in Spain, reducing economic costs and administrative procedures. "It has been a Council of Ministers with a lot of economic content," said Calviño.

The audiovisual law includes various novelties that have been advanced in recent weeks. The most important, politically speaking, is the obligation to establish quotas in co-official languages ​​in the catalog of streaming platforms. This point was negotiated by the Government with ERC during the processing of the General State Budgets, which concluded with the endorsement of the Republicans of the public accounts. Specifically, it is mandatory to include a production quota for co-official languages ​​of 6% of the content offered on audiovisual platforms, although ERC's initial request was 7.5%. Audiovisual service providers are also obliged to finance European productions in advance, with a percentage of their income and, in this case, the reserve to finance productions in co-official languages ​​will be 10% of the total.

"The bill is the result of a long process of preparation and processing. There have been two public hearings, along with numerous exchanges. After all this work we have achieved a good balance to boost the audiovisual industry in our country," said Calviño , who has defended that there is a commitment to "protect our culture and our languages" which is "part of our wealth".

The Government has included another novelty in the rule, in addition to linguistics, by increasing the obligation to contribute to the advance financing of European productions. It increases from 0.9% to 3.5%, although the rule will allow it to be applied in three different ways. The first will be direct investment; the second the acquisition of rights; and the third as a contribution to the Institute of Cinematography and Audiovisual Arts.

The new audiovisual law also includes new requirements and prohibitions in the advertising field, such as the elimination of advertisements for tobacco and electronic cigarettes, limiting alcoholic beverages to certain hours or controlling sexist messages or messages against people with disabilities.

The other legislative reform that Calviño has brought to the Council of Ministers has been the new law called by the Ministry of Economic Affairs as 'Crea y Crece', which seeks to "reinforce" the business fabric in Spain with measures to facilitate the creation of companies and increase their average size. Regarding the first aspect, the new rule will allow the creation of a company from one euro, compared to the 3,000 euros of capital required to date, according to the minister.

"The economic cost is reduced and the procedures are simplified", Calviño stressed in his speech. This also includes that companies can be created electronically and the time and costs of some of these procedures such as the notary or the registry will be reduced.

On the other hand, the new norm that will be sent to Congress will penalize companies that are delinquent in commercial exchanges. These companies will not be able to access public aid, according to Calviño. At the same time, the obligation to issue electronic invoices between companies is extended, regardless of their size, "to have greater control of payments."

Finally, the new regulation to speed up the creation of companies expands the possibilities for companies to use alternative financing methods to banking. This supposes, as Calviño has pointed out, the promotion of schemes such as venture capital or financing in the market. To this will be added "in the coming weeks", the new startup law or the reform of the regulation of bankruptcy procedures of companies in economic problems.