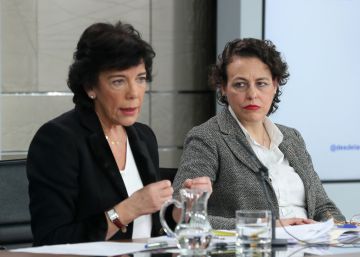 The Council of Ministers approved on Friday a decree law to pay the extra pension in December. Social Security, like the rest of the State, works with the budgets extended for 2018. This means that the budget credits – legal authorizations of expenses – of the pension system remain about 8,000 million euros below what will finally be spent. A transfer of 600 million has also been approved and the use of the Reserve Fund has been authorized, from which some 3,500 million will be taken.

Social Security will spend this year a little more than 128,000 million euros to pay contributory pensions, according to the failed budgets of 2019. What happens is that in the budgets extended from 2018, the rule still in force when not approving the accounts of This year, it only authorizes you to pay almost 120,000 million. Those accounts only included the 0.25% increase in pensions initially planned. Finally, the increase was 1.6%, to which an additional tenth had to be added at the end of the year due to the higher price increase, and another 1.6% in 2019. In addition, the benefits of many widows were increased.

This is an added problem for the Ministry of Labor, not only because of the increase in spending, but also because it now needs a legal authorization to assume that increase in spending, which amounts to an amount similar to what the extraordinary Christmas payroll entails. When an administration has a deficit, as is the case with Social Security, or other items from which to transfer money requires a law that authorizes spending.

Social Security will justify this modification of credit with the expected income from contributions in November and December. As explained by the Minister of Labor, Magdalena Valerio, in the press conference after the Council of Ministers, the increase in collection for contributions this year leaves sufficient margin. "If there had been budgets in 2019, this decree law would not have been necessary," Valerio said in his explanation.

In addition to this measure, the Council of Ministers has also given the green light to a new provision of the Reserve Fund, which may be 3,598 million. "This does not mean that we have to use everything, although we still don't know how much we will use," Valerio warned. However, in previous public interventions, the Minister of Labor has indicated that she believes that some 3,500 million will be disbursed.

If this is finally the amount that is used, the Reserve Fund will have about 1.5 billion euros. Last year it closed with an amount of about 5,000. That remnant is far from the maximum, which was reached at the end of 2011, when it reached 66,815 million. Eight years later and after chaining bulky deficits during all these years, the pension piggy bank already barely has the resources to pay more than 15% of a monthly payroll.

The other announcement Valerio has made regarding pensions is that the Public Treasury will transfer 600 million more to Social Security. Already the budgets extended include a transfer of 1.3 billion to which we must now add these 600 million.