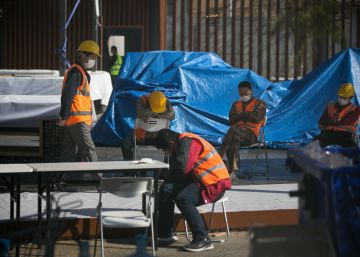 The Government and the World Health Organization (WHO) have questioned this Thursday the decision to cancel the Mobile World Congress (MWC) to be held in Barcelona from February 24 to 27. “There is no public health reason that prevents the celebration of events of this kind,” said Health Minister Salvador Illa. The organizers of the fair will ask all the companies that were registered to bear the cost of cancellation. The GSMA association justified the closing of the contest for “reasons of force majeure”, an argument that is favorable to avoid compensation.

On Wednesday afternoon the organizers of the largest technology and telephony fair in the world announced the cancellation of the fair after a drip of defections. The decision left the authorities and hundreds of companies that had not withdrawn with a bad taste: it was estimated that the event left about 500 million euros in the Catalan capital and its suspension has been a tremendous blow.

Outstanding members of the Government of Spain came out on Thursday in a hurry questioning the cancellation. “It is not because of any health alert in our country, that we are in a very good response situation,” the vice president slipped Carmen Calvo, adding to the thesis of the Minister of Health. Also the economic vice president, Nadia CalviñoHe added the same idea: “With the information available at this time and the recommendation of public health experts, there is no public health reason that prevents holding such an event in our country.”

They wield a report from a European body

So why did the organization suspend the fair? “It has been impossible to carry out this event for reasons of force majeure. The priorities have been: health and safety,” said Mats Granryd, general director of the GSMA, the association that organizes the event since 2006 and is made up of the world’s largest operators . With this argument they try to reduce compensation for the cancellation of an event involving 2,800 companies.

Granryd explained that although the city is prepared to undertake a health challenge such as that of the coronavirus there were “many statements from the European Center for Disease Prevention and Control[[ECDC, for its acronym in English] and from other institutions. “This community body published this week a series of recommendations for events with large concentrations of people.” During the containment phase, the cancellation of mass meetings in the EU can be justified in exceptional cases [por ejemplo, grandes conferencias con un número significativo de participantes de un área altamente afectada]”, says the European center. But this agency, dependent on Brussels, also warns that” the decision to cancel must be coordinated by the organizer and public health and other national authorities on a case-by-case basis. “There are no news, however, that the GSMA has agreed to the suspension with some public administration.

We believe that many of these congresses can be held

“There is no sanitary criterion to suspend the Mobile,” repeated Fernando Simón, director of the Center for Coordination of Health Alerts and Emergencies. WHO also defended a similar thesis: “We cannot be the arbitrator who decides whether or not to celebrate [el MWC], but we can offer organizers guides on how to manage risks based on each event, and can be reduced with very simple measures. Even if cases are detected, the risk can be managed. With proper precautions, we believe that many of these congresses can be held; there is no need to scare people, “said Michael J. Ryan, director of the agency’s Emergency Health Program.

Most scientists and experts consulted by this newspaper insisted on the same idea. “We have repeated it, all the authorities have repeated it. There is no reason from the public health point of view to suspend events such as Mobile,” Antoni Trilla, head of the Preventive Medicine and Epidemiology service at the Hospital Clínic, told this newspaper from Barcelona.

The sanitary consensus defends that the fair could have been held without major problems. They recommend extreme hygienic measures as the organization intended to do, which went from proposing a periodic change of the microphones or suggesting that attendees do not shake hands when greeting each other. They also banned the entry of any assistant from the Chinese province of Hubei, where the city of Wuhan is located, the epicenter of the virus. He even considered checking all passports to verify that no participant had been in China in the last 14 days.

Sylvie Briand, global director of Infectious Threat Preparation at WHO proposed that the institution could help cover risks before, during and after the meeting and advised organizers to be in close contact with local health authorities to act in a manner ” quickly and safely “if a case arose.

But there are also voices of experts who defend the closure of this edition of Mobile. Oriol Mitjà, a specialist in infectious diseases at the Germans Trias i Pujol Hospital in Badalona explained in this newspaper: “The transmission of the infection is high and difficult to control. According to mathematical models developed by the London School of Hygiene and Tropical Medicine, with only three Imported infections there is a probability of more than 50% of a local outbreak occurring.The probability of a case of Covid-19 being exported from China to other countries depends on the number of cases in the focus of origin and the number of outgoing travelers The event was expected to be attended by about 20,000 people from the Asia-Pacific region, and more than 5,000 from China. In addition, confined and crowded environments (such as those of a conference) are ideal for the transmission of respiratory viruses. ” .