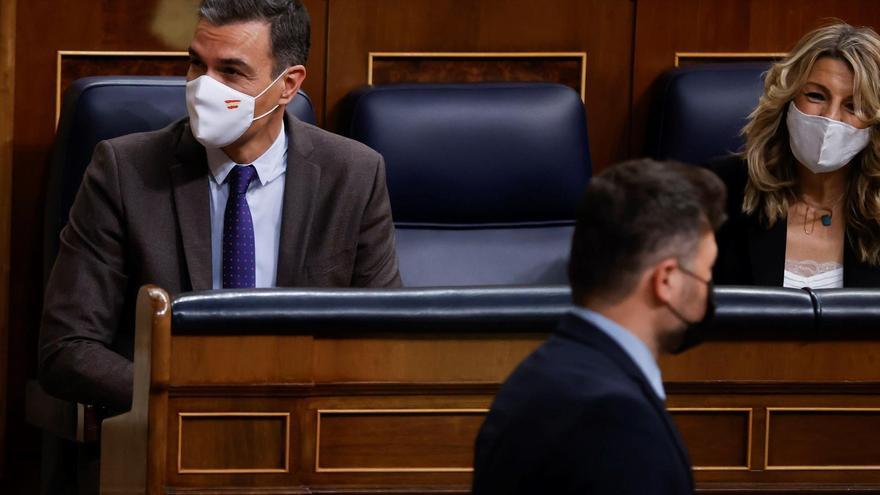 In politics sometimes things happen that do not transcend. Between what is declared and staged in the public sphere and what is cooked or what remains behind the scenes there is a starry distance. Neither the characters behave as they do before the cameras nor the results, sometimes, are as projected by the media or reach the people. With the negotiation for the labor reform Some of this has happened: the construction of a false framework of instability, a supposed change in parliamentary majorities, the drawing of a Pedro Sánchez willing to explore variable geometry and the outline of a coalition in permanent tension between its partners. And all because in this thick line policy the slogans are imposed on the data.

The fact is that neither the Government intends to change parliamentary partners nor the groups that made Sánchez's investiture possible will withdraw support for the Executive nor have they jumped the seams of the coalition. ERC, the PNV and Bildu are still on the same screen as before the approval of the reform. “The world does not end today”, said Gabriel Rufián as soon as he got on the podium to defend the no of your party. The Republican opinion made it clear that the rejection of the new labor relations framework neither marks a turning point in the relationship between regular partners nor has it left a picture of irreconcilable positions. The block vote of the usual partners in the rest of the initiatives that were addressed that same afternoon in Congress was proof of this.

different question is the relationship between Yolanda Díaz and ERC. The Republicans do not have a single reproach towards the PSOE, but they do have one for the second vice president. “From the first minute, the Minister of the Presidency, Félix Bolaños, was clear in saying that they were not going to modify a comma of the text agreed with employers and unions. He told us: 'we can't move, we're not going to move and we don't want to move,'" is reported in the parliamentary group led by Rufián, who regrets that the Minister of Labor "refused to accept reality from the start because she knew that the photo of the support that added the text” was not the most convenient for his political project.

In ERC they remember that already in the first conversation they detected the three obstacles that made the agreement impossible: the content (because the positions were very far away), the guarantees (because Labor proposed changes and the PSOE always warned that it would not accept them even in the text of the decree nor in subsequent regulations) and communication (because in the event that an agreement was reached, the counterpart, according to the ERC version, was that it could not be made public).

Rufián regrets that Díaz has tried to turn the no of his party in a personal matter between the two and he recalls that, unlike other occasions, with regard to the labor reform he never received a call from the management of United We Can to convince him of the Yes. Something that shows, in his opinion, the lack of enthusiasm that the reform aroused in the purples and the timid support that they have given to the text for weeks. The spokesman for the Republicans also denies that behind the ERC position there was "the slightest electoral tacticism" because Díaz has become, as his team maintains, a direct competitor of Esquerra in Catalonia.

In the vice president's team, needless to say, the reading is diametrically opposed and they have recorded some words that Rufián pronounced on January 19: "ERC does not vote for personal projects." Díaz and his entourage take it for granted that Esquerra's position in this entire debate is contained in that sentence.

Be that as it may, and despite the fact that the minister who has added the most consensus in the social dialogue has not been able to transfer that victory to Congress in an initiative to which she had tied a good part of her political capital, the PSOE and ERC maintain intact the dialogue both in Madrid and in Catalonia. So much so that they have already proposed to heal possible wounds to the point that in the talks of recent days they have agreed to park on the legislative agenda those initiatives on which they maintain differences —such as the case of the Democratic Memory Law—, which would translate in practice into a kind of non-aggression pact for the remainder of the legislature. At the same time, they cross agendas for a prompt call for the bilateral State-Generalitat and even a new meeting of the dialogue table between governments.

Beyond the zapatiesta that the PP mounted with the telematic vote of the deputy that made the approval possible and of the new offensive that will unfold against the president of the Chamber, in Moncloa there is satisfaction for having carried out the new framework of relations and that, according to government sources, the coalition, far from having suffered, "has come out strengthened, after the validation of a law that alone justifies an entire legislature."

While Pablo Casado advances unstoppably in his escalation of discrediting the institutions and anti-system drive, presenting himself more and more as a Vox emulator, Sánchez "advances towards positions of centrality and demonstrates the ability to build majorities in a tremendously fragmented Parliament", they congratulate from your team of collaborators. The same interlocutors defend, as ERC, that there is no scratch with the usual parliamentary partners, with whom a permanent dialogue is maintained and that there is no intention of exploring the so-called variable geometry.

In Moncloa they remember that while the vice president insisted on seeking impossible majorities and reneging on the Ciudadanos vote, the minister of the Presidency "built a protection network that was the one that ultimately made the validation possible and the one that he had to accept for the force of the facts Yolanda Díaz”. But beyond the work that Bolaños carried out in parallel with the head of Labor to attract the orange vote and that those of Inés Arrimadas have wanted to distinguish themselves from the PP in the middle of the electoral campaign in Castilla y León, in the Executive they reject any change of majorities in Parliament. A different question is that Yolanda Díaz has not come out of this trance as she intended, under the canopy of the entire left.