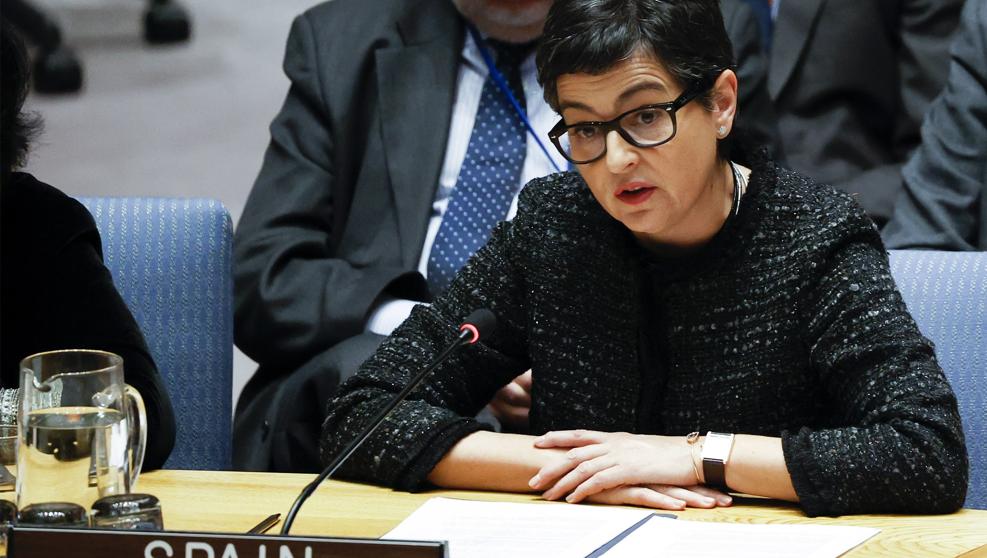 “The Lord Guaidó It’s two things at once. ” With these words, the Foreign Minister, Arancha González Laya, settled from New York the controversy raised by President Pedro Sánchez in Congress last Tuesday when he defined Juan Guaidó as leader of the Venezuelan opposition and not as president in charge.

There is no change of direction in the Spanish political position, warn sources of the Moncloa, but the adaptation of its strategy to the reality of a country that has been a year off and without exit. Guaidó He has not managed to hold the elections in that country, where Spain has multiple interests and Nicolás Maduro Keep ruling.

Said again by González Laya, who yesterday intervened in the United Nations Security Council: “Beyond this terminology, beyond all kinds of discussions we may have about this or another aspect, our commitment is the search for consensus within the country (Venezuela) and this is where I want us to have a little more discussion, both in Spain and outside Spain, with our international partners, ”he remarked. “For now I have more success with my international partners than I have in Spain.”

Álvarez de Toledo says that “if the Government degrades Guaidó, it degrades itself”

From the other side of the Atlantic, sources of Moncloa stressed The vanguard that it is necessary to adapt the policy “to reality”. The Government cannot ignore the situation in Venezuela, because, unlike what happens with other European countries, the volume of Spanish interests, both human and commercial, are not comparable.

Thus, the Government insists that it continues to recognize Guaidó as president in charge of Venezuela, and he knows it. This was stated yesterday by the Vice President of the Government, Carmen Calvo, which recalled some words of Guaidó himself the day before, in which he reaffirmed it. That is why in the Government they do not understand the commotion that has been mounted by the fact that Sanchez called “leader of the opposition“To Guaidó. “We need less noise from the national courtyard” when talking about Venezuela, say the same sources. So “there is no change of strategy, but a real policy exercise“

A position, remember, that is not new, because the former Foreign Minister, Josep Borrell, whose mandate recognized Guaidó as president in charge, spoke of “creative diplomacy” to refer to the position on Venezuela, since it combined the two interests, to contribute to the holding of elections, a commitment that still stands, but without losing sight of who exercises power.

A “creative diplomacy” that was able for Spain, with Sánchez, to lead the European position to recognize Guaidó, and that Minister Borrell met twice with the Foreign Minister of the Maduro regime, because, they remember the same sources , no country has broken relations with the Government of Venezuela.

In addition, government sources explain, Spain continues to lead the European position and does not separate itself from the path indicated by its institutions. In fact, Borrell, now a senior EU representative for Foreign Affairs and Security Policy, said a few days ago: “You have to be realistic. Almost a year later, Guaidó is still where he was, and Maduro is where he is. If Maduro doesn’t want to leave, we have a problem. This is not fixed with invitations to divinity. ”

Despite the insistence of the head of diplomacy and the Government that there has been no change in policy in Spain, since PP Cayetana Álvarez de Toledo insists on “the violent turn” of the Executive. For the popular spokeswoman in Congress, “when the Government degrades Guaidó it degrades itself.” Toledo sees the hand of Podemos in the new government strategy.

The Executive denies it, just as he denies the influence of José Luis Rodríguez Zapatero, who acts as a mediator between Maduro’s regime and the opposition. On the contrary, the consulted government sources insist, and the clearest example is that the foreign minister unmarked herself from her efforts in Venezuela four days ago coinciding with a new trip by the former president to Caracas. “About the visit of Spanish citizens to Venezuela, as Spaniards I have nothing to comment,” said González Laya when asked about Zapatero’s trip.

Spain’s position is linked to that decided in the European Union, and what it will try to promote is to advance the diplomatic activity of the so-called contact group, created by the European Union at the proposal of Madrid, being Minister Borrell. All with one objective, diplomatic sources point out, encouraging and pushing the parties to find “a solution between them.” Spain will dedicate all efforts to that.