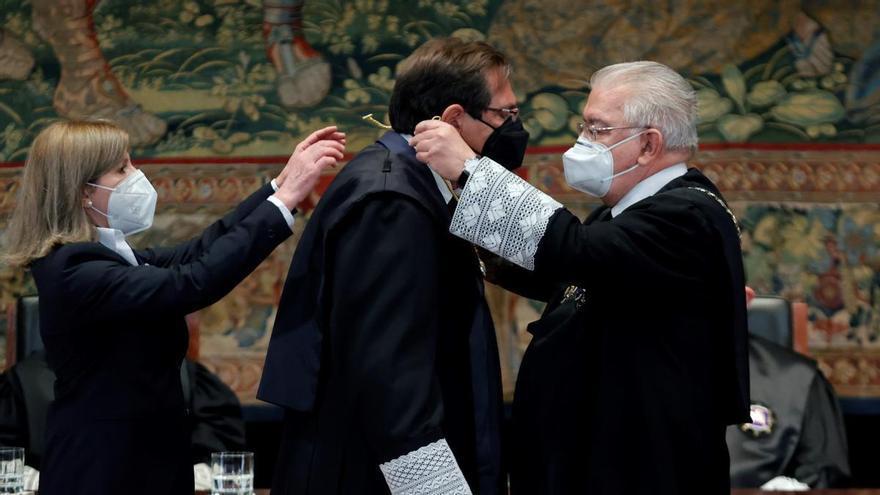 Prioritize the deal. That was the maxim that moved the deputies of the PSOE to vote for the candidates proposed by the PP for the Constitutional Court, the controversial Enrique Arnaldo and Concepción Espejel. Pedro Sánchez himself admitted that he disliked the proposals he agreed with Pablo Casado. But for the Government there was a greater reason that led it to accept the names of Pablo Casado for the renewal of some constitutional bodies: subsequently to unblock the Judiciary and, from there, to have a progressive majority as of June 2022.

On that date the mandate of four magistrates expires: those appointed by the Government of Mariano Rajoy – the current president, Pedro González-Trevijano, and Antonio Narváez, who replaced the Madrid councilor. Enrique Lopez in 2014- and those appointed by the CGPJ -Santiago Martínez Vares (conservative) and Juan Antonio Xiol Ríos (progressive). From that moment on, a period of at least four years begins with a progressive majority, in the event that the June renewal goes ahead in the usual terms, which can be extended for another five years.

In Moncloa they assume that in June he will appoint the two (progressive) magistrates that correspond to him and that, therefore, the current conservative majority will be reversed at a key moment in which the court of guarantees has to face important decisions (the abortion, euthanasia, or the so-called Rhodes law for the protection of children, among others) after years of conservative pronouncements, such as the endorsement of the reviewable permanent prison, hot returns or against the states of alarm that allowed confinements against the pandemic. It remains to be seen the calendar established by the guarantee court itself and how many of those matters are resolved before the summer.

The legal question is whether the Government can renew the names that correspond to it if the CGPJ continues to function. The legislative change promoted by PSOE and United We Can to pressure the PP to renew it prevents the governing body of judges from making appointments. In the Executive they take for granted that they will be able to designate the corresponding magistrates in July, but some sources believe that the changes in the Constitutional must be carried out by indissoluble thirds, that is, that the Congress appoints four magistrates at the same time; the Senate, another four; and the Government and the CGPJ -as an indivisible pack- another four. Hence also that the Government entrusted to the renewal of these bodies without vetoes the subsequent unblocking of the Judiciary.

Despite the fact that in recent weeks the Government has been cooling expectations of an imminent renovation of the Judicial Power, in Moncloa they trust that by the summer Pablo Casado will have agreed to update it. “The PP is seeing that the more time passes without renewing and in the ‘no’ the evidence of the need to renew is increasingly clear,” state government sources. Pedro Sánchez puts pressure on the leader of the opposition with the argument that, once the rest of the bodies have been renewed – Constitutional, Ombudsman, Court of Accounts … – it makes no sense to block the CGPJ.

A blocked CGPJ that has its hands tied to continue making appointments and that, therefore, cannot apply its conservative majority inherited from the absolute majority of the PP in 2013 to make appointments as it did during the first two years with the term expired. This has resulted in another traffic jam on the opposite sidewalk on Calle Marqués de la Ensenada in Madrid: the jurisdictional rooms have more and more vacancies and from the Supreme Court itself they incessantly warn of an upcoming collapse that will drastically affect their operation .

Last October the government chamber of the Supreme Court – chaired by Carlos Lesmes himself – took out the calculator and warned that the situation will become “unsustainable” if the CGPJ is not renewed and it can fill all the retirement vacancies that arise. The calculation is that, among all the chambers, each year 1,000 fewer sentences will be issued from the Supreme Court. Next year there will be 16 vacancies, representing 20% ​​of a staff of just over 70 magistrates. A particularly complicated scenario given the avalanche that is expected in different jurisdictions due to lawsuits related in one way or another to the pandemic and its effects on the economy and employment.

The refusal of the Popular Party to reach an agreement to renew the General Council of the Judiciary has just completed its third anniversary and for the moment it translates into a triple blockade: that of the governing body of the judges, that of the positions that do not they are renewed in the Supreme Court and, finally, it can translate into a blockage in the renewal of the Constitutional Court. Waiting to see if the Government can renew on its own the two seats that correspond to them independently of a CGPJ currently in office and with a conservative majority.

The case of the Constitutional Court forces to draw the calendar to see how the renewal of one or another part of its magistrates can affect major decisions. President Pedro González-Trevijano has already announced that the court of guarantees will start again on December 13 with the meeting of its two rooms and two days later with the first plenary session after the renovation. At the moment these first meetings do not carry any topic of special sensitivity according to the agenda that is already public.

The clear candidates for the next plenary sessions are the issues that were pending in the last plenary sessions completed without reaching the end of the list of duties of the magistrates. One of those themes is known as’Celaá Law‘, which is on the agenda of the plenary session on October 26 and which will probably be one of the first to arrive at the next plenary sessions of the Constitutional Court. The speaker, Ricardo Enríquez, proposes, as this newspaper advanced, that the Government be forced to pay for the education that separates boys and girls in schools.

Other issues are also on the recent agenda. One of them is the question of unconstitutionality raised by the Superior Court of Justice of Aragon on the legal reform that put in the hands of these territorial courts the endorsement of the restrictions imposed by the autonomous governments to alleviate the effects of the pandemic. This measure allows that, currently, regional executives request the endorsement of their TSJ and later before the Supreme Court. That presentation was from Judge Andrés Ollero and has been assumed by Enrique Arnaldo after the partial renewal of the court.

Parallel calendars of plenary sessions and renewals can shape the future of issues like abortion. The Constitutional Court has in the refrigerator but without fully taking the resources of the Popular Party against the Abortion Law of 2010 and against the Euthanasia Law of this year, that of Vox against the ‘Rhodes’ Law of Child Protection and even that of both parties against the reform that prevents appointments to a sitting CGPJ. If they are held in plenary session before June, they will be studied by a conservative majority. If it is done after the June renewal – if it takes place – it will be done by a progressive majority. In an interview in the SER Chain, President González-Trevijano has ventured that the draft will be ready in the coming months but without anticipating when the deliberations will take place, whether before or after June, and that he will try to speed up the processing of these types of matters of special sensitivity and significance. .

This would lead to the next flying goal until four years from now, in March 2026, when the mandate of two progressives and two conservatives expires: on the one hand Cándido Conde-Pumpido and María Luisa Balaguer and on the other Ricardo Enríquez and Alfredo Montoya. They are the four candidates dependent on the Senate, so many things will depend on the composition of the Lower House at that time. But as has happened in this latest renovation, the tradition is that this proportion of two members from each sector is respected. The next renewal, scheduled for 2028, would be that of the candidates who have just entered by appointment of Congress.

Nine years, therefore, of a progressive majority in the Constitutional Court depend on the renewal of next June, which in turn may depend on the renewal of the Constitutional Court. A new blockade of the situation in June will prolong a conservative majority in the court of guarantees at a time when some of the major legislative projects of the coalition government will have been left to the magistrates.